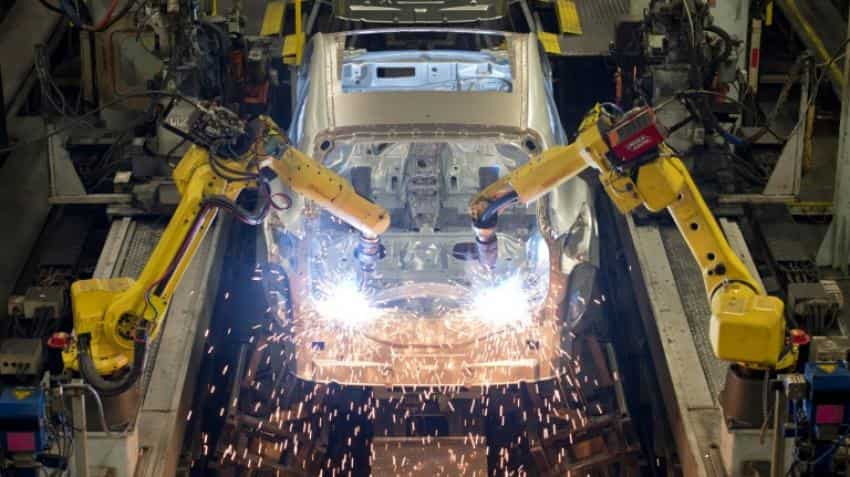 Since US manufacturing employment peaked in the late 1970s, according to Michael Hicks of the Center for Business and Economic Research at Ball State University in Indiana. Image Source: AFP

Donald Trump has been crowing as companies including Ford renounce plans to move factories to Mexico. But the main beneficiaries of this shift back to the US aren`t saying much by way of celebration -- industrial robots don`t tend to speak.

While globalisation`s detractors blame countries such as China and Mexico for stealing the factory jobs of the West, experts point to less obvious culprits which are harder to scapegoat and to overcome in an interconnected economy with complex supply chains.

Since US manufacturing employment peaked in the late 1970s, according to Michael Hicks of the Center for Business and Economic Research at Ball State University in Indiana, "95 percent of job losses were due to productivity improvements including automation and computer technology, rather than trade".

Indiana is one of the rust-belt states where Trump triumphed in November, and the president-elect has promised a punitive border tax against outsourcing companies as he bids to become "the greatest jobs producer that God ever created".

But while the US economy is pumping out manufactured goods in record volumes, it is achieving that feat with 7.3 million fewer factory hands than in 1979, government figures show.

Automation has transformed the productivity of manufacturing since industrial robots first started painting, cutting, welding and assembling in the 1960s.

And experts point to more recent innovations such as artificial intelligence, management apps and 3D printing as new threats to shop-floor workers as well as to white-collar staff.

"The apparent change of heart of these American companies is due to the hard math of expected tax cuts and regulatory changes (under the Trump administration)," he told AFP in a phone interview, noting that under company projections, robots rather than wages will account for the bulk of planned investment that is being redirected from Mexico to the US.

Vows to renegotiate trade pacts, or declare China a currency cheat, played well for Trump on the campaign trail but trends such as automation have already rendered much low-skilled US labour obsolete.

The total output of US manufacturing rose more than 250 percent from 1980 to 2015, but its workforce slumped by roughly 40 percent in that time, according to analysis by the Brookings Institution in Washington.

"America is already producing a lot. And in any event, the return of more manufacturing won`t bring back many jobs because the labour is increasingly being done by robots."

Annual data from the International Federation of Robotics show an inexorable rise in the worldwide use of industrial robots. China is now the biggest market for them.

Even if jobs did return, Western consumers are likely to balk at paying the higher prices that companies would have to charge to reflect the higher input prices -- everything from wages to property leases and electricity tariffs -- of making those goods at home.

Take television manufacturing. Had that stayed in America, experts say, each set would cost hundreds of dollars more than they do now on average, limiting their affordability. Households would have stuck with one TV in the living room, instead of several dotted around the home.

"Trade doesn`t kill jobs, it protects consumption," Hicks said, while also stressing that globalisation had created millions more jobs in Western nations` services and logistics sectors than it has destroyed in industry.

So if those manufacturing jobs are gone forever -- and new developments such as machine learning and nanotechnology portend a "Fourth Industrial Revolution" -- what can be done to assure the future of workers in the developed world?

Some ideas are in their policy infancy, such as a universal basic income, but others are well-known and perhaps more pressing than ever, including better education and re-training.

Such discussions will inform the World Economic Forum in Davos, Switzerland, coming up in the same week that sees Trump inaugurated as the 45th US president on January 20.

"We are at some kind of turning point in history," WEF founder Klaus Schwab said. "We need new concepts. We cannot have just populist solutions."

Discovery Plus releases documentary 'Storming the Capitol: The Inside Story'

YouTube extends suspension of Donald Trump's channel for another week