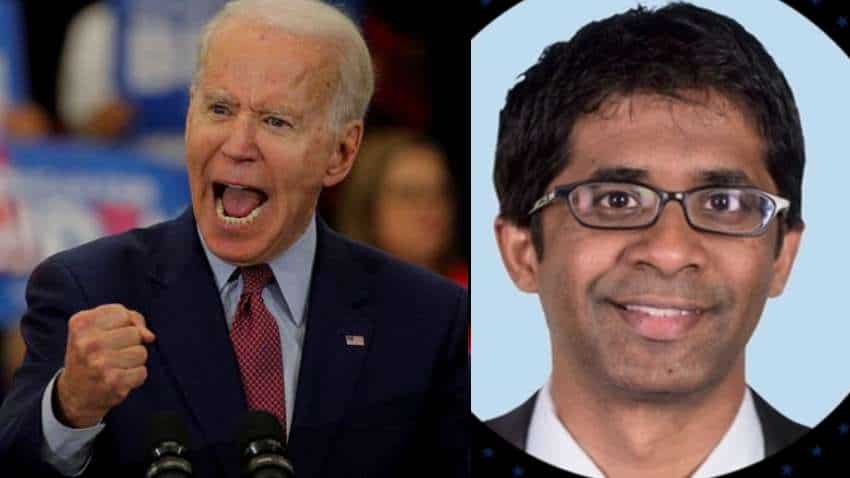 Biden Inauguration, Oath Ceremony: Vinay Reddy is the first ever Indian American to be appointed as a presidential speech writer. Pics from IANS and Reuters.

When the entire world is waiting to hear new US President Joe Biden's inaugural address, people in a remote village in Telangana will cherish the moment for his speechwriter has his roots in Hyderabad.

Villagers of Pothireddypeta in Karimnagar district, about 200 km from Hyderabad, feel proud that Cholleti Vinay Reddy has been appointed as the director of speechwriting of the new US President.

People in the village recall their association with Vinay Reddy`s father Narayana Reddy, who migrated to the US in 1970.

Narayana Reddy, who did his schooling in the village, pursued MBBS in Hyderabad and later migrated to the US.

Vinay Reddy was born and brought up in the US but his family maintained its links with the village. The family still owns three acres of land and a house in Pothireddypeta.

Narayana Reddy and his wife Vijaya Reddy still visit the village and meet relatives and friends. They had last visited the village in February 2020.

"It`s a matter of pride not just for our family but the entire village that Mr. Vinay Reddy rose to such an important position in the US," said Cholleti Sai Krishna Reddy, a relative of Vinay Reddy, who looks after their family land in the village, as per a report in IANS.

He previously served as chief speechwriter to Vice President Biden in the second term of the Obama-Biden White House, after which, he worked as Vice President of Strategic Communications at the National Basketball Association.

Reddy grew up in Dayton, Ohio, the middle of the three sons in an immigrant family and is a product of the Ohio public schools from kindergarten to Miami University to The Ohio State University College of Law. He currently lives in New York with his wife and their two daughters, it reads.

The speech is likely to last between 20 and 30 minutes.

The theme of the speech is America United.

Joe Biden, in his maiden address to the nation soon after being sworn in as the 46th President of the United States, would deliver a forward-looking speech built around the theme of unity.

According to the advisors, in his first moments after being sworn in as the 46th President of the United States by Chief Justice John Roberts after the clock strikes 12 noon (local time) at the West Front of the Capitol, Biden will speak about the need to bring the country together during an unprecedented moment of crisis.

He will reach out to all Americans, and call on every citizen to be part of meeting the extraordinary challenges facing fellow Americans, his advisors said Tuesday on the condition of anonymity.

Biden's remarks will be a forward-looking vision for his presidency while addressing the moment we are living in as a country. The speech is built around the theme of unity, said the advisors who were not authorized to speak to the press.

According to The Wall Street Journal, people familiar with his plans said Biden has been drafting the speech since the start of his presidential transition in November. Aides have said his speech will be in keeping with the major themes of his campaign, including unity, bipartisanship and optimism, the daily noted.

He wants to use the moment to call Americans to unity, incoming White House Press Secretary Jen Psaki was quoted as saying by The Wall Street Journal.