Will the govt increase disinvestment targets for FY19?

The BSE on its website explains that the main objective of disinvestment is to indicate that PSUs had shown a very negative rate of return on capital employed. 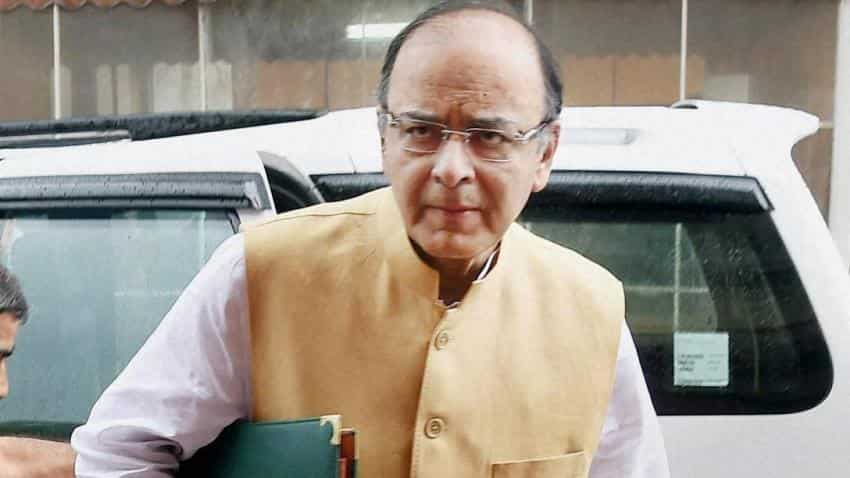 In the upcoming Union Budget, many would keenly watch the Finance Ministry's statement on disinvestment targets as it is considered to be the key component for fiscal target's final picture.

The disinvestment policy, initiated since July 1991 in India, is referred to as an action of an organisation (government) selling or liquidating an asset or subsidiary. It basically refers to sale from the government, partly or fully, of a government-owned enterprise.

The BSE on its website explains that the main objective of disinvestment is to indicate that public sector undertakings (PSUs) had shown a very negative rate of return on capital employed.

Data compiled by the BSE mentioned that about 10– 15% of the total gross domestic savings were getting reduced on account of low savings from PSUs. Hence, the need for the government to get rid of these units and to concentrate on core activities was identified.

Let's have a look as to where does Indian government stand in meeting its disinvestment target. 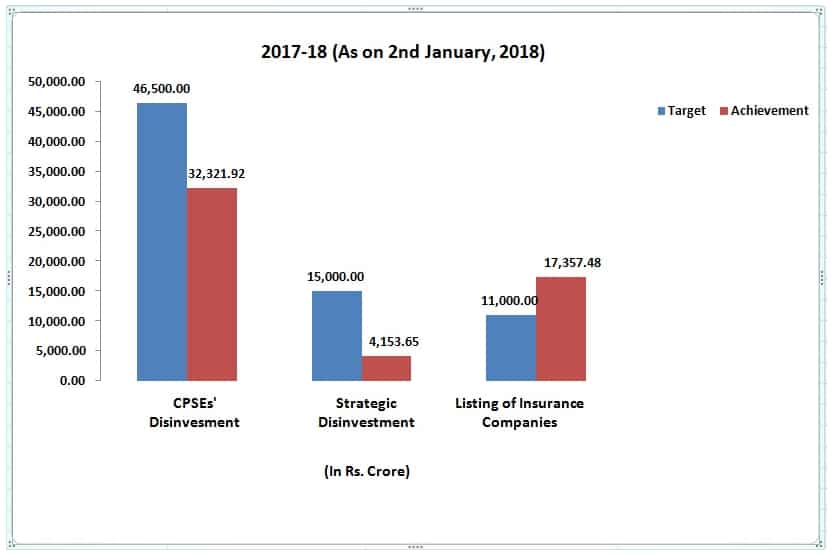 It was only listing of insurance companies that overshoot the disinvestment target of Rs 11,000 crore this fiscal. Government has raised about Rs 17,357.48 crore from this mechanism with listing of The New India Assurance Company Limited and General Insurance Corporation Of India.

Indian government has thus raised about Rs 53,833.05 crore – which would be over 74% of disinvestment target. 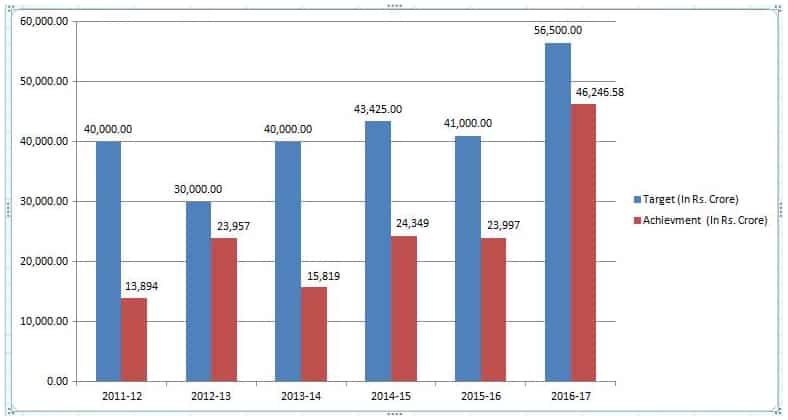 The performance of disinvestment has been lackluster between FY12 and FY17.

In previous fiscal (FY17), the government could manage to raise about Rs 46,246.58 crore from its target of Rs 56,500 crore. Underachievement of the target has been the case since last six years.

Analysts are very optimistic on FY18 performance, as they believe government has the potential to fulfil the target.

Sanjeev Prasad, Suvodeep Rakshit, Sunita Baldawa and Anindya Bhowmik of Kotak Institutional Equities earlier said, “Government had many options to raise larger amount from divestment of its stakes in state-owned companies, but has consistently fallen on meeting divestment targets given limited appetite among investors and low clarity on the divestment schedule.”

Ind-Ra added that the government could exceed its capital receipt target in the remaining four months of FY18, depending on Oil and Natural Gas Corporation’s acquisition of government stake of 51.11% in Hindustan Petroleum Corporation Limited.

The agency opines the disinvestment strategy has the potential to generate Rs 1 lakh crore and provide buffer against lower surplus transferred by the Reserve Bank of India and the likely shortfall from the telecom sector.

Aditi Nayar, Principal Economist at ICRA, said, “If the proposed acquisition of the GoI’s stake of 51% in Hindustan Petroleum Corporation Limited by Oil and Natural Gas Corporation gets completed in the current fiscal, total disinvestment proceeds would exceed the budgeted level, helping to offset some of the feared shortfall in tax and non-tax revenue.”

Disinvestment not for shutting down CPSEs, but to make them more efficient: FM Nirmala Sitharaman

Disinvestment: Government yet to decide on which banks to privatise, says MoS Finance Bhagwat Karad in Lok Sabha