With this reduction, the FM said the government will bear the revenue loss of Rs 13,000 crore in the remaining part of FY18. 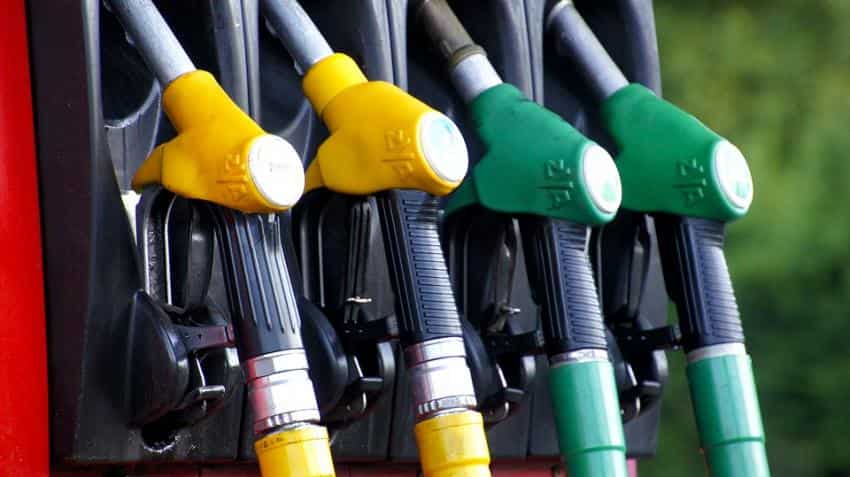 Petrol prices in many cities of India have risen up to Rs 80 a litre, a level last recorded in the year 2014.


This clearly shows that both petrol and diesel prices are over three-year high.

The three-year high situation has been in India for quite sometime, since the government linked petrol and diesel prices with international markets last year.

Dharmendra Pradhan, Minister of Petroleum of Natural Gas, on June 16, 2017, said, “With this historic step towards transparency and customer interest, the Indian Oil & Gas industry has joined the elite league of countries like USA and Australia wherein fuel prices are revised on a daily basis.”

But what was supposed to be an helping hand for Indian citizen has now turned out to be a nightmare because petrol and diesel prices have remained unchanged since 2014.

So can we expect Rs 2 per litre excise duty cut in Union Budget FY19 will be able to check price rise in the petro products.

Let's understand what is Road and Infrastructure Cess and what does it mean to consumers.

This is an additional excise duty imposed on motor spirit is commonly known as petrol and high speed diesel. It will come into effect immediately owing to a declaration under the Provisional Collection of Taxes Act, 1931.

Previously, Road and Infrastructure cess on motor spirit stood at Rs 6 per litre. 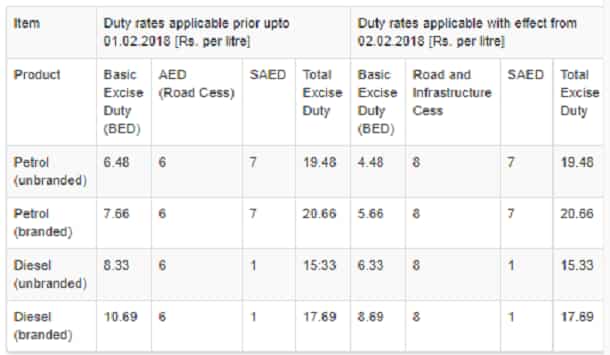 In fact, if we understand the pattern, excise duty on fuel product has not undergone any changes at all.

Earlier, the Finance Ministry had announced a Rs 2 per litre cut on petrol and diesel with effect from October 4, 2017, to cushion the impact of rising international prices of these petro products.

With this reduction, the FM said the government will bear the revenue loss of Rs 13,000 crore in the remaining part of FY18.

When reduction in excise duty was announced, Moody’s Investors Service stated it would be positive for consumers and would stir up demand for fuel products - which in turn result in higher earnings for oil marketing companies.

Moody’s also highlighted the government’s position in bringing down the excise duty.

During October month, Moody’s said, “There is limited flexibility for the government to reduce taxes further if it were to maintain its fiscal discipline. If prices rise, that would hurt demand growth, which would be credit negative for the oil-marketing companies.”

In the FY19 Budget, Jaitley has revised revenue estimate from Union Excise Duty to Rs 276,995 crore - from previous budgeted estimate of Rs 406,900 crore for FY18.

The FM has, however, further lowered the excise duty revenue receipt estimate for FY19 to Rs 259,600 crore.

CLSA on Jaitley’s decision said, “There has been some re-jigging of the excise classification (infra/road cess and basic excise) for petrol and diesel but effectively the overall excise burden is unchanged.”

“FY19 budgeted excise collections from auto fuels seem to build in no cut in excise duties during the year despite high crude prices. This may keep the suspense alive on whether the gov’t will cut duties to offset any further rise in crude prices,” CLSA added.

It may ne mentioned that higher crude price comes as a negative outcome for India, as the government is impacted by this trend in two ways.

Firstly, the government earns substantial revenue from petro-products through taxation, as they have been kept out of the Goods and Services Tax (GST) regime. States are also able to levy variable taxes as a result of which prices vary across states.

Secondly, the government also provides a subsidy for fuel products in order to buffer against prices.

As country heads for polls, Budget 2023 may rain sops on farm sector