Defence sector not satisfied by marginal 6.2% hike in allocation in Budget 2017

While some in the defence industry welcomed the hike in the allocation, there were others that felt that this was not enough considering the government wants to keep India on the top in terms of defence. 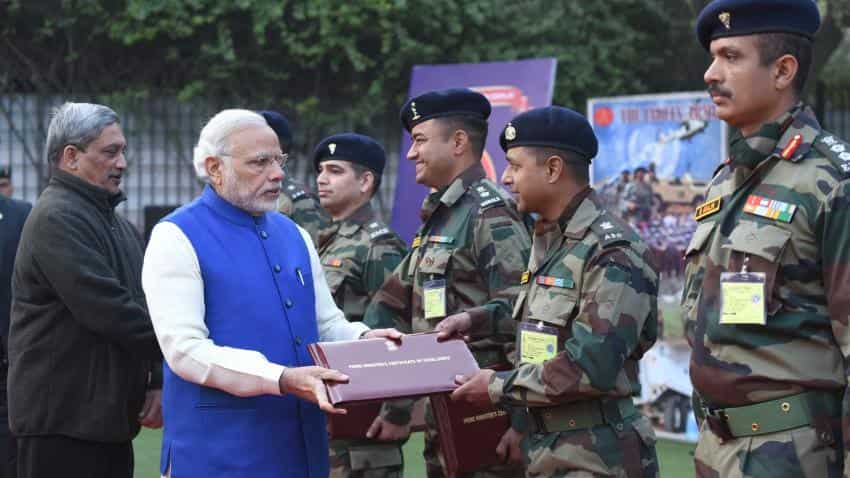 Finance Minister Arun Jaitley's announcement of the Union Budget 2017 saw an increase in the defence budget of a marginal 6.2% for the next fiscal at Rs 2.74 lakh crore from the current Rs 2.58 lakh crore, with the capital outlay to cover the modernisation programmes getting a hike of 10.05%.

The capital outlay for the three defence services for the purchase of new equipment, weapons, aircraft, warships and other military vehicles stood at Rs 86,488 crore for 2016-17 as compared to Rs 78,586 crore for this fiscal.

Budget documents show that revised capital budget for this fiscal is Rs 71,700 crores, but it is not clear whether the Defence Ministry was unable to spend the remaining amount (Rs 6,886 crore) or whether any savings were done.

The money allocated for defence pensions was Rs 85,737 crore as compared to revised estimate of Rs 85,624 crore this fiscal.

"The increased allocation towards capital expenditure in defence budget is a welcome move. It shows the government's commitment towards indigenisation. The increased spend by the government on capex will lead to trickle down effect and more work for SMEs. It will further help in defence and fleet modernisation. It will also boost Make in India in defence," Puneet Kaura, MD and CEO Samtel Avionics said.

However, Ankur Gupta-Vice President (Aerospace and Defence) at Ernst & Young India said that if one takes into account the depreciating Rupee and the imposition of customs duty on all defence imports, this increase may "not suffice to meet the modernisation requirements".

"The capital budget has increased by approximately 10% when compared to the budgetary estimates, but if we consider the impact of the depreciating Rupee and the imposition of customs duty on all defence imports, this increase may not suffice to meet the modernisation requirements," he said.

Roomie Dara Vakil, Director, Solar Industries India Ltd said, “It appears that while the capital outlay is similar to last year, the increase in the revenue budget by about 16% which would indeed increase the spend on am munition and consumables, it would be good for the domestic manufacturing companies in this segment.  Considering that the estimated lapse of 10% in the capital spend in the previous year, the budget on capital expenditure is satisfactory provided it is utilised with minimum lapse in budget. Since Government’s emphasis on defence preparedness has been the Central theme, we would have been happy if some incentives by way of tax exemption or deferment on loan payments would have been announced for domestic industry.”

"Our defence forces keep the country safe from both external and internal threats. A Centralised Defence Travel System has now been developed through which travel tickets can be booked online by our soldiers and officers. They do not have to face the hassle of standing in queues with railway warrants," Jaitley said.

He said a comprehensive web-based interactive Pension Disbursement System will be established for defence pensioners.

The budget comes at a time when the three defence services--the Army, Navy and Air Force are in in the process of modernisation. The second trance of payments of the 7.87 billion euros have to be made this fiscal besides a host of other already committed liabilities.

However, sources who spoke to PTI expressed confidence that plans of new projects will not be delayed as payments are done in phased manner.

Here's list of products proposed in Budget 2017 set to be costlier, cheaper

Aadhar Pay for those who are without debit cards: Budget 2017

Here's what the Budget 2017 has in store for the poor, underprivileged