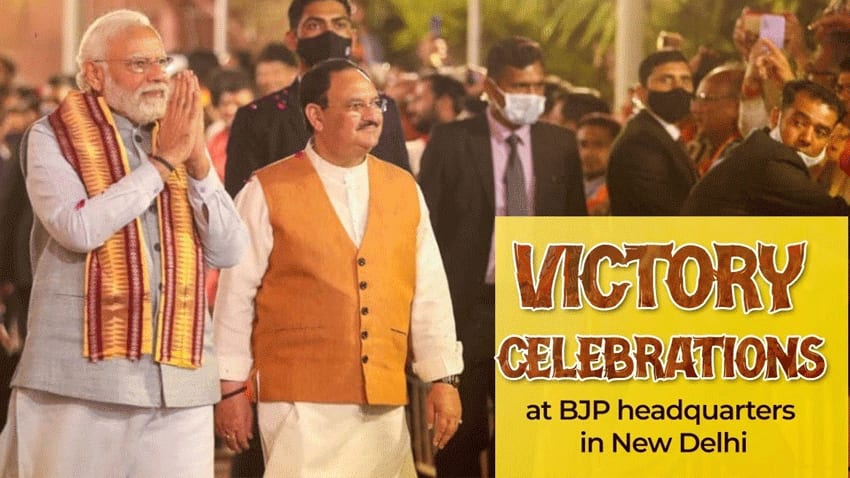 Modi Speech LIVE: The BJP on Thursday attributed the party's "historic" victory in Gujarat assembly polls to Prime Minister Narendra Modi's credibility and people's trust in his leadership. The party secured landslide victory in Gujarat to retain power for a seventh straight term by winning more seats than in any assembly election in the state.

"Gujarat has set new records of development in the last two decades under the leadership of Modi ji and today the people of Gujarat have blessed the BJP and created a new record of victory.

"Every section has wholeheartedly blessed the BJP. This is the victory of people's unwavering faith in BJP's policies," Nadda tweeted.

Union Home Minister Amit Shah termed it as a rejection of those who do politics of hollow promises, freebies and appeasement.

In a series of tweets, Shah said he salutes the people of Gujarat on this historic victory and it shows the "unwavering faith of the public in Narendra Modi's development model".

"In the last two decades, under the leadership of Modi ji, the BJP broke all records of development in Gujarat and today the people of Gujarat have blessed the BJP and broken all records of victory," Shah said.

Gujarat Chief Minister Bhupendra Patel said the people of the state have rejected the anti-national elements in the Assembly election and once again reposed faith in Prime Minister Modi and the BJP leadership.

The Congress holds the record of winning 149 seats in 1985 under the leadership of Madhavsinh Solanki.

Addressing a press conference in Gandhinagar, CM Patel said, "The people of Gujarat have once again reposed faith in Prime Minister Narendra Modi and the BJP leadership. If the masses of Gujarat have elected the BJP, then we have to live up to their expectations."

"The people of Gujarat have rejected the anti-national elements in this election and have voted for the BJP's track record of development in the state," he said.

Gujarat BJP president C R Paatil, who was also present at the press conference, hit out at new poll entrant Aam Aadmi Party, alleging it tried to demean the people of Gujarat with "dole" politics.

"AAP never thought about Gujarati Asmita (pride) and was never able to connect with the psyche of the Gujarati people.

" All anti-Gujarati forces have been defeated...The Congress must introspect as to why they are losing public support," he said.

Ahead of 2024 general elections, Union Cabinet reshuffle buzz gains ground – These prominent faces may get berth

Holi Date in 2023: When is Holi in Uttar Pradesh, Bihar | Holika Dahan Date