Gujarat Assembly Election Result 2022 Latest Updates: Counting of votes will begin at 8 am on December 8 at 37 counting centres. 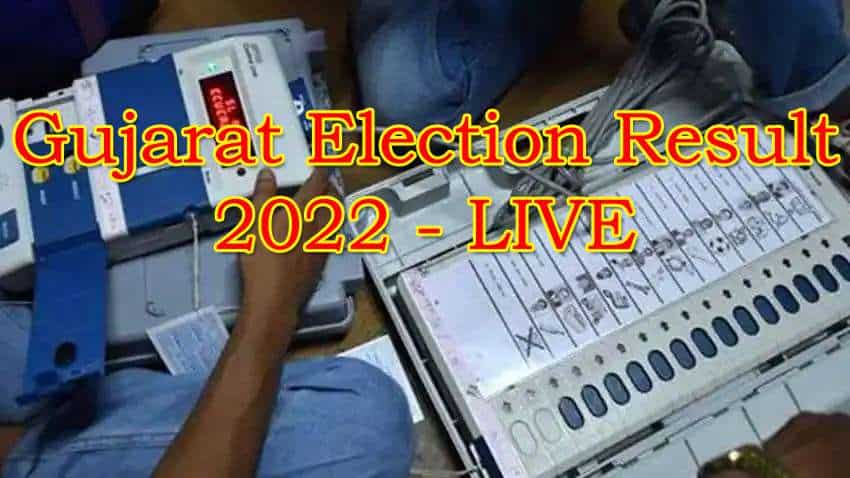 Gujarat Assembly Election Result 2022 Latest Updates: A total of 70 political outfits and 624 independents were in the fray.

Gujarat Election Result 2022: Where to watch and check

Gujarat Assembly Election Result 2022 live updates will be available on zeebiz.com. Viewers can also watch results on the news channel of Zee Media. Also, one can keep an eye on the website of the Election Commission of India (ECI) i.e. results.eci.gov.in.

The Gujarat Assembly elections were held in two phases on December 1 and 5 across 33 districts.

While the contest in Gujarat has traditionally been between the BJP and Congress, it was three-cornered this time around with Aam Aadmi Party (AAP) entering the poll arena.

Voter turnout stood at 66.31 per cent, lower than the 71.28 per cent recorded in the 2017 Assembly elections. The fate of Chief Minister Bhupendra Patel, Aam Aadmi Party (AAP)'s chief ministerial candidate Isudan Gadhvi, youth leaders Hardik Patel, Jignesh Mevani and Alpesh Thakor, among a total 1,621 candidates will be decided on Thursday.

A total of 70 political outfits and 624 independents were in the fray. Apart from the main rivals BJP, Congress and AAP, 101 candidates from Bahujan Samaj Party (BSP), and 26 from the Bharatiya Tribal party (BTP) also contested.

In the 2017 Assembly polls, BJP won 99 seats and Congress 77 seats, while two seats went to BTP, one to NCP, and three to independents. The majority mark in Gujarat is 92. Ahead of this month's elections, the BJP's number in the House stood at 110 and Congress at 60 after 20 MLAs who won on Congress seats switched over to the BJP in the last five years, three of them quitting just ahead of the elections.

Gujarat Election 2022: Who will be the next chief minister? Check details

Samsung Galaxy S23 Ultra Review: Does it offer the best price-performance mix for you?