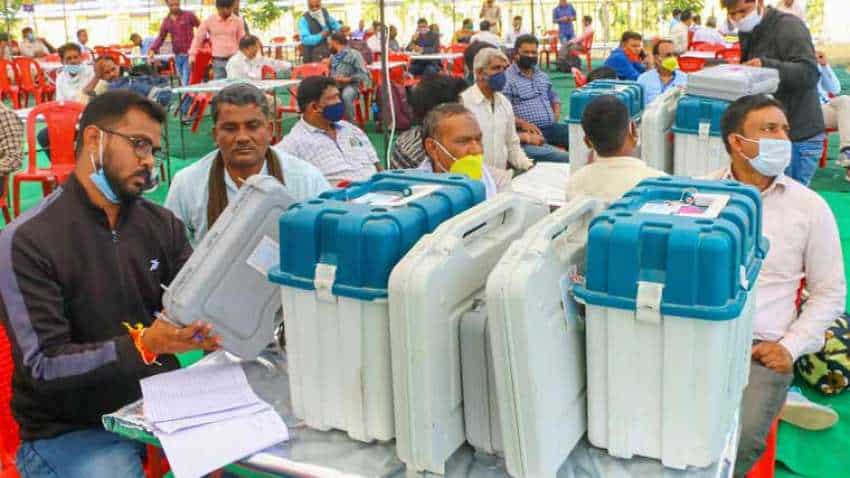 Bypoll Election Results 2022: The BJP won in four out of seven assembly constituencies in six states, retaining the three seats it held, in the by-election results declared on Sunday, while the TRS and RJD bagged one each after a stiff contest with the saffron party.

Rutuja Latke, the candidate of Shiv Sena (Uddhav Balasaheb Thackeray), won the by-election to Andheri (East) in Mumbai, the seat earlier represented by her deceased husband, after major parties including the BJP did not field candidates. The second-highest number of votes (14.79 per cent) went to the None Of The Above (NOTA) option in the constituency.

The BJP said the result of the November 3 by-election was a stamp of approval by people on Prime Minister Narendra Modi's policies as it retained Gola Gokarannath in Uttar Pradesh, Dhamnagar in Odisha and Gopalganj in Bihar where it had fielded the kin of its party MLAs whose death necessitated the polls.

Candidates of AAP and INLD lost their deposits as they failed to secure one-sixth of the votes polled.

The resignation of Bhavya's father Kuldeep Bishnoi necessitated the by-election after he left the Congress and joined the BJP.

The Adampur seat has been held by the Bhajan Lal's family since 1968, with the late leader representing it on nine occasions, his wife Jasma Devi once and Kuldeep on four occasions.

It was the only seat where the Congress was in some reckoning. The party lost Adampur (Haryana) and Munugode (Telangana), where its MLAs had resigned and joined the BJP.

Komatireddy Raj Gopal Reddy had sought re-election on a BJP ticket after quitting the Congress.

"Thanks to the people of Munugodu for reposing faith in TRS party & Hon'ble CM KCR's leadership.

In Bihar, the RJD saw its victory margin fall in Mokama and it fell short of a win in party president Lalu Prasad's home district of Gopalganj, which the BJP retained, albeit by the skin of its teeth.

It was the first electoral test for the Nitish Kumar-led 'Mahagathbandhan' (RJD-JDU-Cong) government, formed less than three months ago after the JD(U) parted ways with the BJP.

RJD candidate Neelam Devi won in Mokama by more than 16,000 votes. The bypoll was necessitated after the disqualification of her husband MLA Anant Kumar Singh.

The BJP contested from the constituency for the first time as the saffron party had, on previous occasions, left the seat to its allies.

BJP's Kusum Devi, the wife of MLA Subhash Singh whose death had necessitated the by-election in Gopalganj, polled 70,032 votes, while RJD's Mohan Gupta got 68,243.

The AIMIM had won five seats in the last assembly polls and all but one of its MLAs joined the RJD.

Bihar Deputy Chief Minister and RJD leader Tejashwi Yadav said the decrease in the BJP's victory margin was a "success" for them and their alliance will win in 2024 Lok Sabha polls.

"Despite all the opposition forces coming together, the people have put their stamp on the development-oriented leadership of Prime Minister Shri Narendra Modi ji. It is clear from this that the faith of the people of Bihar is with the BJP," BJP chief J P Nadda said.

He said the victory in Gola Gokarannath and Adampur reflects the public support for the double-engine BJP governments.

BJP's Aman Giri defeated his nearest rival and Samajwadi Party candidate by over 34,000 votes in the UP seat that fell vacant after the death of his father and party MLA Arvind Giri on September 6.

With the BSP and the Congress keeping away, it was a direct contest between Aman Giri and Tiwari. The BJP's campaign was led by Chief Minister Yogi Adityanath, while SP chief Akhilesh Yadav did not campaign.

Yadav on Sunday accused the BJP government of using illegal means in the election and said it had defeated democracy in the assembly seat. By securing over 90,000 votes, the SP candidate has challenged the BJP, he claimed.

Adityanath congratulated BJP workers. "This spectacular victory is a symbol of the unwavering faith of people in the public welfare policies of the double-engine BJP government," Adityanath said in a tweet in Hindi.

The bypoll was necessitated by the death of Surja's father and BJP MLA Bishnu Charan Sethi in September.

The NOTA gives an option to electors not to vote in favour of any of the candidates in an election.

This was the first electoral contest in Maharashtra after the Uddhav Thackeray-led Maha Vikas Aghadi (MVA) government collapsed in June following a revolt by a section of Shiv Sena MLAs led by Eknath Shinde.

Thackeray said the victory showed that people were supporting his Shiv Sena.

"This is just the beginning of a fight. The (party) symbol is important but people look for the character too. The bypoll results show people support us," Thackeray told reporters at his residence

"Our party's name and symbol were frozen for this election, but those who wanted this are nowhere near the electoral ring," Thackeray said in a veiled swipe at the faction led by Maharashtra Chief Minister Eknath Shinde.

Haryana | It' a victory of the policies of PM Modi, of the working of CM Khattar, of the trust of Adampur in Chaudhary Bhajan Lal family. I thank the people of Adampur they trusted us once again: BJP's Kuldeep Bishnoi, father of BJP candidate Bhavya Bishnoi#AdampurByElection pic.twitter.com/tg0af74Hrl

BJP candidate Suryabanshi Suraj continues his lead on the assembly seat after five rounds of counting, with a total of 22,495 votes so far. pic.twitter.com/TNe4j2UtLC

12:23 PM: RJD’s Neelam Devi wins Mokama seat that was vacated by her husband Anant Singh's disqualification after conviction in an Arms Act case.

#UPDATE | BJP candidate from Adampur assembly seat in Haryana, Bhavya Bishnoi continues his lead with a total of 35,686 votes so far after the sixth round of counting.

11:30 AM: Rutuja Latke of Uddhav Thackeray faction of the Shiv Sena way ahead in Andheri East; NOTA (none of the above) in second.