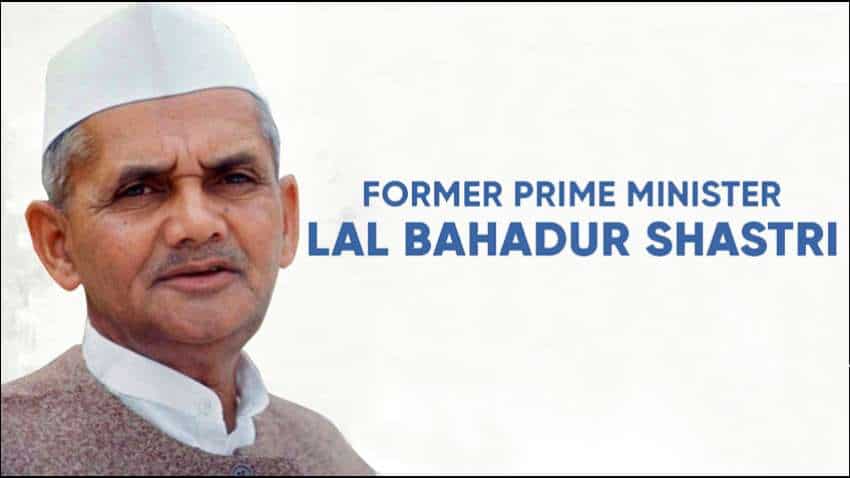 Lal Bahadur Shastri Jayanti, Birth Anniversary, Quotes: On October 2 every year, the nation celebrates the birth anniversary of Lal Bahadur Shastri who served as the second Prime Minister of India from 1964 to 1966. Born in 1904 in Mughalsarai, Uttar Pradesh, Shastri was an exemplary leader and a man of vision. Right from days of being a seasoned freedom fighter to taking charge as the Prime Minister, Shastri continues to inspire Indians with his leadership style and humble personality.

1. Lal Bahadur as a child used to walk many miles to his school barefoot even when the streets burned in the summer's heat. Fondly referred to as 'Nanhe' at home, he also used to easily cross the river Ganga with a bag and cloth on his head during early days.

2. Lal Bahadur joined the Kashi Vidyapeeth in Varanasi. He got the title Shastri at the Vidyapeeth as a mark of scholarly success.

3. When Shastri was the Minister of Police and Transport in Uttar Pradesh, he didn't use lathi charge to disperse crowds instead used jets of water. It was during his tenure when the initiative was taken to appoint women as conductors.

4. Lal Bahadur Shastri promoted Green Revolution to boost food production in the country. He played a key role in the White Revolution to make India self-reliant in milk production. He created the National Dairy Development Board in 1965.

5. He resigned from the post of Minister of Railways as he took moral responsibility for an accident in which many lives were lost.

6. Shastri also served as the Home Minister from 1961 to 1963. During this tenure, he set up the first committee to tackle corruption.

7. There is a famous story about him being irked after his son got a promotion in job. Shastri had then released an order wherein he ordered to reverse the promotion of his son.

8. He led the country during the Indo-Pakistan War of 1965. After the war, the country faced severe drought. Shastri urged the people of India to fast for a day and coined the famous slogan 'Jai Jawan Jai Kisan'.

9. Shastri had taken a car loan of Rs 5000. The loan was repaid by his wife after his sudden death in Tashkent.

10. Shastri was awarded Bharat Ratna, India's highest civilian award, in 1966. He became the first recipient to be honoured posthumously.

- The preservation of freedom, is not the task of soldiers alone. The whole nation has to be strong.

- The basic idea of governance, as I see it, is to hold the society together so that it can develop and march towards certain goals.

- We have now to fight for peace with the same courage and determination as we fought against aggression.

- The economic issues are most vital for us and it is of the highest importance that we should fight our biggest enemies - poverty and unemployment.

- We believe in peace and peaceful development, not only for ourselves but for people all over the world.

Lal Bahadur Shastri passed away on 11 January 1966 in Tashkent, Uzbekistan (then Soviet Union), a day after signing a peace treaty with Pakistan to end the 1965 Indo-Pakistan War. There have been debates on the causes of his death and speculations of a conspiracy.

​Who is Dominique Lapierre? 5 most famous books by the bestselling author