Gandhi Jayanti 2022: Globally, Mahatma Gandhi's birth anniversary is celebrated as the International Day of Non-Violence. Several events are being held in India and across the world to mark the occasion. 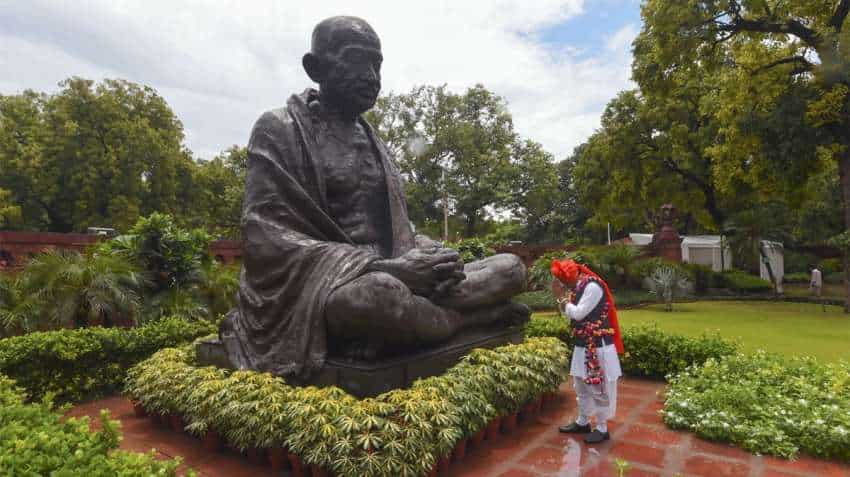 Gandhiji is universally revered as an apostle of peace and non-violence. PTI (File Image)

Gandhi Jayanti 2022: India pays homage to the father of nation, Mahatma Gandhi, on Sunday, October 2, 2022. The country celebrates the 153rd birth anniversary of the torchbearer of India's freedom struggle today. It's a special day for all Indians to remember Bapu's struggles and sacrifice.

A beacon of peace

Gandhiji is universally revered as an apostle of peace and non-violence. The jewel of India's freedom movement was an embodiment of selfless service, kindness and compassion. In fact, not just India, but leaders across the world adhere to his teachings, ideals and values. Even today, his noble principles are globally relevant and give strength to millions.

Born on October 2, 1869, in Porbandar town of Gujarat, Mahatma Gandhi or Mohandas Karamchand Gandhi adopted a non-violent resistance and was at the forefront of the freedom struggle against colonial British rule with utmost patience. This led to India finally achieving its independence in 1947.

Fondly known as Bapu, his unwavering belief in 'Swaraj' (self-governance) and 'Ahimsa' (non-violence) won him accolades across the world. Globally, Gandhi's birth anniversary is celebrated as the International Day of Non-Violence. Several events are being held in India and across the world to mark the occasion.

"Be the change that you want to see in the world."

"Nobody can hurt me without my permission."

"An ounce of practice is worth a thousand words."

"Ahimsa is the highest duty. Even if we cannot practice it in full, we must try to understand its spirit and refrain as far as is humanly possible from violence."

"Heroes are made in the hour of defeat. Success is, therefore, well described as a series of glorious defeats."

"Democracy necessarily means a conflict of will and ideas, involving sometimes a war to the knife between different ideas."

“On the occasion of Gandhi Jayanti, let us take inspiration from Mahatma Gandhi to learn from the mistakes of our past and work for a better future.”

“He was the one who always promoted non-violence and truth and bonded us together to fight for an independent country…. Happy Gandhi Jayanti.”

“Warm wishes on Gandhi Jayanti to you…. Let us remember and salute the man who led us on the path to get independence and always inspired us as a nation.”

"A very Happy Gandhi Jayanti to you…. Bapu always supported causes for the development of a nation and therefore, we must follow them all for a better country.”

Prepare speech like this: Start with good poetry or any quotes of Gandhi ji, which will attract the attention of the audience. Begin your speech with aggression on India's freedom struggle. Try to say the speech in simple words. In your speech, definitely mention things related to the life of Gandhiji. End your speech and wish everyone a Happy Gandhi Jayanti once again.

Important points that can be included in the speech on the occasion. Bapu's journey from Barrister to Father of the Nation and how he led the country to freedom from the British by following the path of truth and non-violence. Noteworthy movements started by him like Dandi Yatra, Quit India Movement, Non-cooperation Movement, Boycott of foreign goods among others. His thoughts on education and message to mankind is important to include.

Gandhi Jayanti 2022: 5 Bollywood movies based on life of Mahatma Gandhi