An Action Hero Box Office Collection Week 1: With the low-key performance, the film earned Rs 2.52 crore on day 3 (December 4) at the domestic box office. This collection was even less than Varun Dhawan-Kriti Sanon-starrer creature-comedy 'Bhediya'. 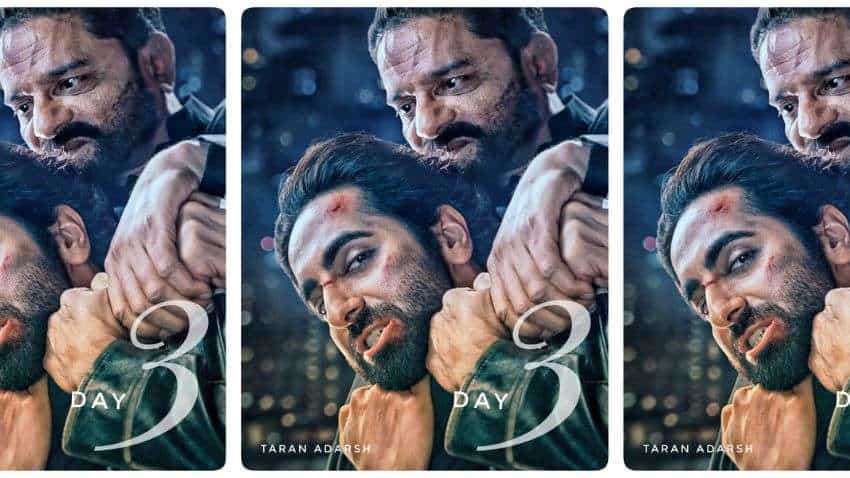 An Action Hero Box Office Collection Week 1: Ayushmann Khurrana's recent release 'An Action Hero' performed below average in its opening weekend. The film, which was released in theaters on December 2, has been directed by Anirudh Iyer.

With the low-key performance, the film earned Rs 2.52 crore on day 3 (December 4) at the domestic box office. This collection was even less than Varun Dhawan-Kriti Sanon-starrer creature-comedy 'Bhediya, which earned Rs 4.36 crore on Sunday (Week 2).

The film critic Adarsh found the film had a rough opening weekend. He added that it did show some spark on Day 2, but didn’t fire enough on Day 3.

It is to be noted that the film opening was also shockingly low and the day 1 collection surprised the film critic.

An Action Hero Cast and Production
The film casts include Ayushmann Khurrana, Jaideep Ahlawat, Mirabel Stuart, Hiten Patel and more. The action film also has a cameo of Akshay Kumar. "An Action Hero" is produced by Colour Yellow Production and Bhushan Kumar and Krishan Kumar's T-Series.

An Action Hero Storyline
In the movie, Khurrana plays Maanav, an action hero, who runs for his life as Bhura Solanki (Jaideep Ahlawat) wants to avenge the mysterious death of his brother. Ayushmann, who described "An Action Hero" as a deviation from his past work, said he felt like a newcomer during the filming process.

An Action Hero IMDB Rating
The movie received mostly positive reviews from critics and viewers, however, the film got off to a slow start at the box office. The IMDB rating of 'An Action Hero' is 8.2 out of 10.

Ayushmann Khurrana-Aanand L Rai team up 3rd time
The actor Khurrana teamed up for the third time with Rai for this film. Their previous two films were -- "Shubh Mangal Saavdhan" and "Shubh Mangal Zyada Saavdhan".