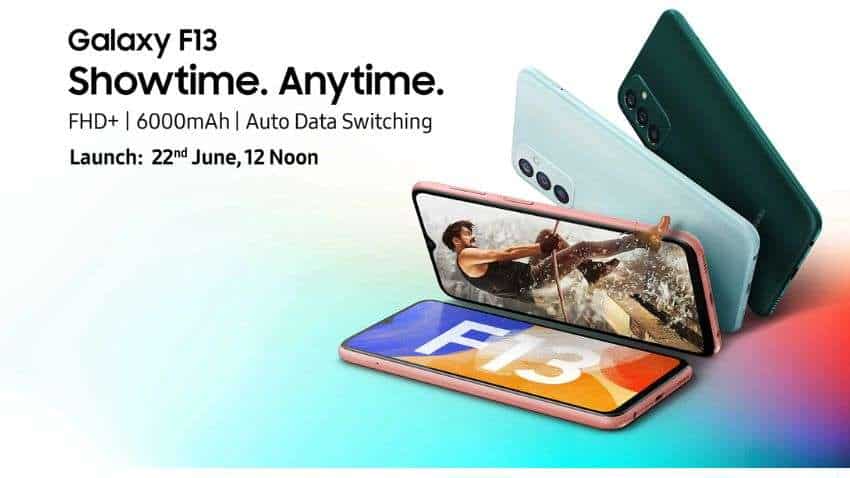 Samsung Galaxy F13 price: In good news for budget smartphone lovers in India, the South Korean technology brand Samsung is all set to launch its new F-series mobile phone --  Galaxy F13 in India today at 12 noon. The company has created a micro-site for this upcoming phone and it will be sold exclusively on e-commerce platform Flipkart.

According to the company, the Samsung Galaxy F13 is expected to be priced below Rs 15,000 in India. However, this is just a speculation and we advise are readers to wait for an official announcement from the brand. Earlier, Flipkart teased the Galaxy F13 on its mobile app and website under the "Mobile Phones End of Season Sale" section.

The Samsung Galaxy F13 is slated to come with a slew of attractive features such as FHD+ display for an immersive viewing experience. Galaxy F13 has massive 6000mAh battery that helps you conquer the day and night without getting worried about frequent charging, the brand said.

Additionally, Galaxy F13 sports segment-first Auto Data Switching feature to enable seamless connectivity even when your primary SIM is out of network and comes with up to 8GB RAM, with RAM Plus. "With such showstopper features, Galaxy F13 caters to the evolving needs of millennials and Gen Z consumers for uninterrupted, on-the-go entertainment," Samsung India further added.

By seeing the image on the e-commerce platform, we can see that the smartphone is coming with triple camera setup on the rear side along with LED flash. As mentioned above, the smartphone is arriving with a massive 6,000 mAh battery with 15 watt fast charging. This can be the major USP of this device in the expected price segment.  The phone will come in three colour options – Pink, Blue, and Green.

Also, the Geekbench listing of the Samsung Galaxy F13 has revealed that it comes with a Samsung Exynos 850 processor clocked at 2.0GHz and runs on Android 12-based OneUI 4.1 out of the box. The device has a side-mounted fingerprint scanner for security. The Samsung Galaxy F13 will also be the first smartphone in the series to offer auto data switching feature.

Vivo V25 Pro 5G price in India, specifications and availability - All you need to know ahead of Aug 17 launch