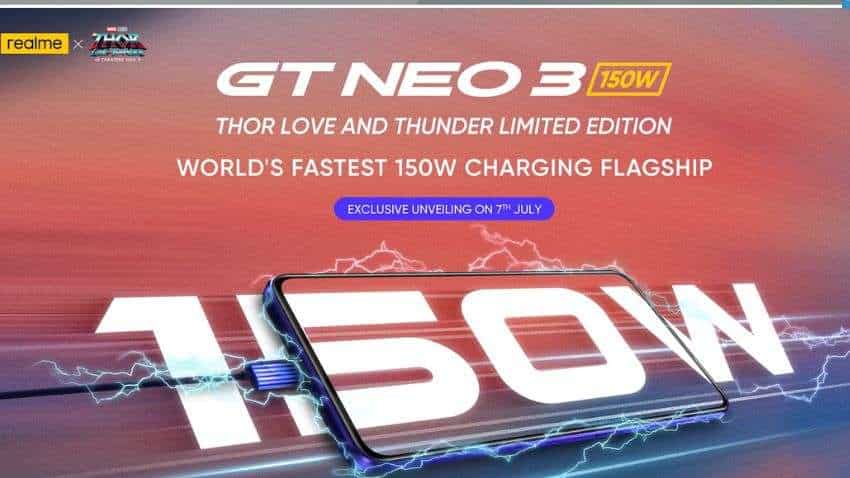 We can expect the Realme GT Neo 3 150W Thor Love and Thunder edition to come with the same specifications as the regular variant.

The smartphone brand is collaborating with Marvel Studios for the second time. Previously in 2019, it had partnered for the launch of Realme X Spider-Man Edition. This time, The Realme GT Neo 3 150W will arrive in special Thor: Love and Thunder Edition.

"Today, We are quite pumped to announce our upcoming collaboration with Marvel Studios upcoming movie, Thor: Love and Thunder. The power and speed that Thor carries resonate perfectly with our Realme GT NEO 3 150W, and therefore, we are bringing a Realme GT NEO 3 150W Thor love and thunder limited edition on July 7, 2022, for all Realme fans and Thor worshippers," the company said in a statement.

We can expect the Realme GT Neo 3 150W Thor Love and Thunder edition to come with the same specifications as the regular variant.

Realme GT Neo 3 5G features a 6.7-inch FHD+ AMOLED display that offers a 120Hz refresh rate and a 1,000Hz touch sampling rate. It is powered by MediaTek Dimensity 8100 SoC and offers up to 12GB RAM and up to 256GB of internal storage. The device runs on Realme UI 3.0 based on Android 12.

The smartphone features a triple rear camera setup that houses a  50MP Sony IMX766 primary sensor, an 8MP ultrawide lens, and a 2MP macro sensor. For selfies, you get a 16MP front-facing camera placed inside a punch-hole cutout on the top of the display.

In terms of battery, the Realme GT Neo 3 5G comes in two variants. While the 150W UltraDart Charge variant is backed by a 4,500mAh battery, the 80W SuperDart Charge model gets a 5,000mAh battery. The company claims that the 150W variant can charge 50 percent in just 5 minutes.