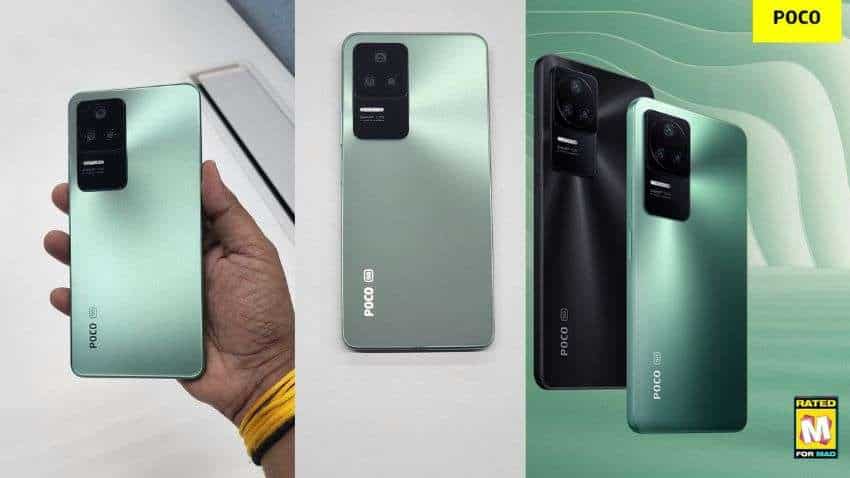 Poco F4 5G, Poco X4 GT global launch event will begin at 12:5:30 PM IST, and the event will be livestreamed on the company's YouTube channel. Interested viewers can visit Zee Business website to watch event live as we have also embedded the live link below.

Ahead of the launch, Poco Global team has revealed key specifications of these two upcoming phones. Recently, Poco took to micro-blogging site Twitter and confirmed that the Poco X4 GT will be powered by MediaTek Dimensity 8100 processor. The brand wrote: "The future is about speed. Unlock possibilities with #POCOX4GT fully packed with MediaTek Dimensity 8100.More playing, less waiting, and #NoSpeedLimited."

The teaser also suggests that the device will offer a 144Hz LCD display. Also, via another teaser, Poco has confirmed the 67W fast charging support for the Poco F4 5G and the X4 GT.  Poco, in the latest teasers, has confirmed that the X4 GT will offer MediaTek Dimensity 8100 processor, 144Hz LCD display, and 67W fast charging. According to my sources, the Poco X4 GT might come in €400 pirce bracket.

Also, the company has shared that the Poco F4 5G will be equipped with Qualcomm Snapdragon 870 processor, 120Hz AMOLED display, and 67W fast charging support.

The company wrote on Twitter: "The POCO F4 5G is almost ready for its global debut... Well almost. Packed with #EverythingYouNeed, the legend arrives on 23.06.2022 at 5:30PM. Set your reminder now - https://bit.ly/POCOF45GLaunch."

According to the company, The Poco F4 5G will be available for purchase via Flipkart in India. While Poco hasn’t shared any details about the pricing of the upcoming Poco F4 5G smartphone yet, but we expect this smartphone may come around Rs 25,000- Rs 30,000 in India. However, this is a speculation and readers are advised to wait for official announcement.

The smartphone will offer Liquidcool 2.0, which is a cooling system with a 3112 mm sq. vapour chamber and a 7-layer graphite sheets to meet the thermals under check. The device is confirmed to come with up to 12GB LPDDR5 RAM, and up to 256GB of UFS 3.1 storage as well.