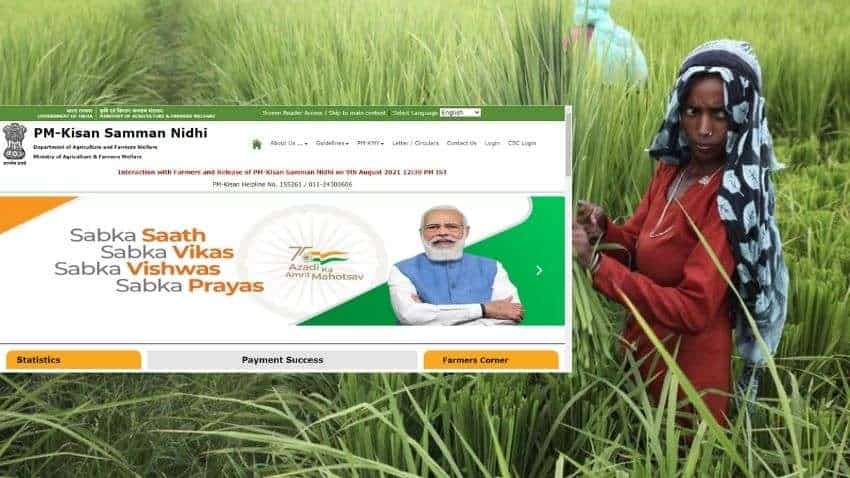 PM-KISAN 10th Installment latest: It is expected that Prime Minister Narendra Modi will release the 10th instalment financial benefit under Pradhan Mantri Kisan Samman Nidhi (PM-KISAN) scheme in December 2021. The beneficiaries can get latest updates by logging in to the official website of PM-Kisan at pmkisan.gov.in.

Now, there are certain important things about the PM-Kisan scheme that one should remember. They are as follows:

1) Under the PM-KISAN scheme,  all landholding farmers' families are provided with financial benefit of Rs 6000 per annum per family and payable in three equal installments of Rs.2000 each, every four months.

2) The scheme provides minimum income support up to Rs 6,000 to farmers across the country. The amount is directly transferred to the bank account of the farmers.

3) ln the beginning when the PM-Kisan Scheme was launched on February 24, 2019, 2019, its benefits were admissible only to small and marginal farmers' (SMF) families, with combined landholding up to 2 hectares. The Scheme was later on revised with effect from June 1, 2019 and extended to all farmer families irrespective of the size of their landholdings.

4) The PM Kisan beneficiaries must note that the beneficiary lists would be displayed at Panchayats to ensure greater transparency and information. Furthermore, the states and the union territories would notify the sanction of benefit to the beneficiary through system generated SMS. He / she can also ascertain his status through the Farmers Corner in the PM Kisan portal.

6) Micro land holdings, which are not cultivable, are excluded from the benefit under the scheme.

7) It has to be noted that the agricultural land being used for non-agricultural purposes will not be covered for benefit under the scheme.

8) The responsibility of identifying the eligible farmers' families for benefit under the scheme is entirely of the State/UT governments. The prevailing land-ownership system / record of land in different states/union territories will be used to identify the intended beneficiaries for transfer of scheme benefits.

9) It must be noted that in case of such farmer families whose names are not included in the list of beneficiaries, they can approach the District Level Grievance Redressal Monitoring Committee in their districts for inclusion of their names in the beneficiary list. Furthermore, they must know that the government has created an exclusive Farmers' Corner in the PM-KISAN web-portal at pmkisan.gov.in in giving certain facilities to the farmers.

10) The State/UT Governments are free to decide about the appropriate mechanism / authority for validation of information / declaration furnrshed by the beneficiary.

In case of any query and further details, the interested individuals can login to the official website of P-Kisan at pmkisan.gov.in.

PM-Kisan 10th installment in December! See how to check names in beneficiary list

PM-Kisan 10th installment to be released this month, these categories are not eligible for Rs 2000 installment amount

Budget Expectations 2022: Job and income supporting measures to be watched - All you need to know