Know the biggest hits of Budget 2019 that will impact you; all you want to know in brief

The FM already believes that, India will become a $3 trillion economy by end of this current fiscal. 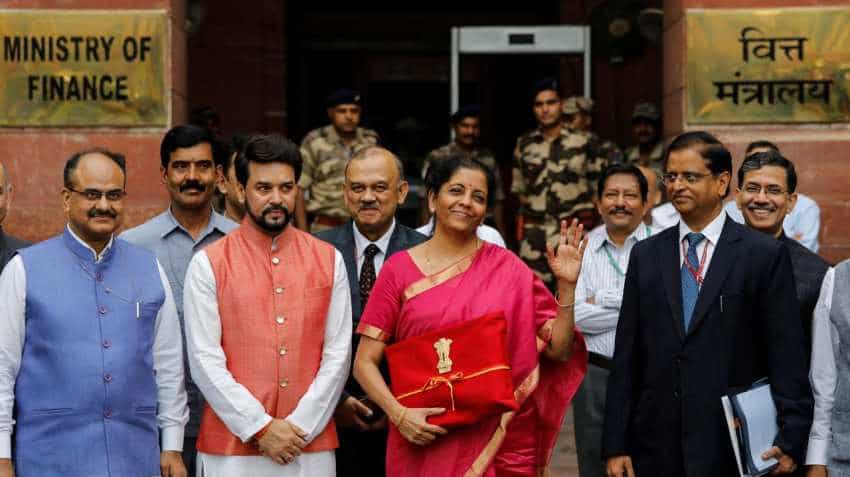 Budget 2019 was all about maintaining India's fiscal position, and to push economic growth towards $5 trillion mark. Photo:

Budget 2019 was all about maintaining India's fiscal position, and to push economic growth towards $5 trillion mark. Accordingly, various proposals were announced by Finance Minister Nirmala Sitharaman on Budget day. The FM believes that India will become a $3 trillion economy by end of this current fiscal. While income tax slabs were kept unchanged, however many other benefits were announced to boost investment in the country. Accordingly, tax benefits were also announced, by making various schemes attractive. Women empowerment has also seen some changes while angel tax once again took center stage for startups.

Archit Gupta, Founder & CEO at ClearTax said, "BJP led government had promised to offer more sops if re-elected. The taxpayers had pinned their hopes on the government to offer extended tax benefits. The government was tasked with addressing issues like unemployment and reviving economic growth."
Here's how Budget 2019 has helped common man, women and startups, as per Gupta.

1) Direct Tax Reforms: Some of the provisions have been amended and newly introduced under income tax laws in order to provide relief to taxpayers in India.  The following are the tax reforms with respect to direct taxation:'

Under NPS provisions, the tax exemption on withdrawal has been increased to 60% from 40%.

Contribution made by the central government to NPS for their employees has been raised from 10% to 14%. Therefore, employees can claim higher deduction under section 80CCD(2) which is outside of 80C.

Contribution to NPS Tier 2 account is now eligible for deduction under section 80C, however, this is only for central government employees.

In order to promote affordable housing, the government has introduced section 80EEA. This Section allows taxpayers to deduct an additional Rs 1.5 lakh on the home loan interest paid. This brings the total tax deduction to Rs 3.5 lakh considering the benefits covered under Section 24. However, this benefit is available only if the value of the house less than Rs 45 lakh and the home loan is taken between 1 April 2019 and 31 March 2020.

For encouraging electric vehicles  in India, the government has proposed a new section 80EEB. Under this section, Individuals are eligible for tax deductions of up to Rs 1.5 lakh on the interest paid towards vehicle loans availed for purchasing an electric vehicle. The individual should not own any other electric vehicle when availing the loan and the loan must be availed between 1 April 2019 and 31 March 2023.

There were loopholes in the tax system and individuals were encashing on these to evade taxes. There was no provision to deduct TDS on payments made to the contractors or professionals offering contractual services. The government has amended Section 194 as follows:

Section 194M: At present, only individuals and HUFs who have their accounts audited are required to deduct tax at source on contractual and other payments. The new Section 194M proposes to increase the ambit of TDS on payments by requiring Individuals and Hindu Undivided Families (HUFs) making contractual payments and payment of fees for professional services are required to deduct tax at the rate of 5% on payments made above Rs 50 Lakh.

Section 194N: In order to further discourage cash transactions and move towards less cash economy, a TDS has been proposed on annual cash withdrawals made in excess of Rs 1 crore by taxpayers. A TDS of 2% is proposed to be levied on annual cash withdrawals made by any taxpayer above Rs 1 crore. Several measures have been put in place to curb cash in the economy, yet cash thrives. This is another shot at discouraging people from using cash.

Section 194-IA: This section requires a taxpayer to deduct tax at 1% of the sale value of an immovable property where the value of the property is equal to or above Rs 50 Lakh. It is now proposed to define sale value to include all charges such as car parking fee, maintenance fee, club membership fee or any other similar charges that are related to the transfer of immovable property paid by a buyer to a seller of the immovable property. Which seems more of a revenue collection measure, will be refunded when capital gains are reinvested.

2) Start-up sector garnering the government’s support: To address the issue of unemployment  and ease of doing business, SME and start-ups have been given prominence in the 2019-20 Union Budget. The government has proposed the following amendments pertaining to SME and start-ups:

The funds raised by the start-ups  will not be scrutinised by the Income Tax Department.

The angel tax issue is resolved,  now the start-ups and investors are needed to undergo any scrutiny in their value of share premiums. Startups funded by Category-II Alternative Investment Fund (AIF) are now exempted from angel tax, w.e.f from 1st April 2019. However, eligibility criteria are still the same and need to be reformed.

Tax exemption on capital gains  from the sale of a house or a piece of land for investment in start-ups extended till FY 2021. Where the startup invests this in purchase of a new asset as laid down under section 54GB.

Assessing Officers need to  get prior approval from their higher officials to conduct an inquiry or verify the declarations made by the start-ups. This will reduce the incidence of higher scrutiny for startups who receive funding.

3)  Women Empowerment: The expectations of the female working population was soaring high as the government has given the reins of the country’s finances to a woman. Nirmala Sitharaman has not disappointed them by amending the following:

An overdraft of Rs 5,000 to  be allowed for each verified woman of an SHG having Jan-Dhan Bank Account.

One woman of each SHG to be  made eligible for a loan of up to Rs 1 lakh under MUDRA scheme.

4)  Focus on Rural Areas: Rural India is the soul of India. Keeping the holistic development of the nation in the mind, the following amendments are made:

All rural families, except  those willing to take, will have electricity and a clean cooking facility by the year 2022.

The phase II of the PMAY-Gramin  will provide 1.95 crore houses to the eligible beneficiaries by FY 2021-22. These houses come with amenities like LPG connection and electricity.

By keeping the farmers’ interest  in mind, 10,000 new farmer product organizations will be formed.