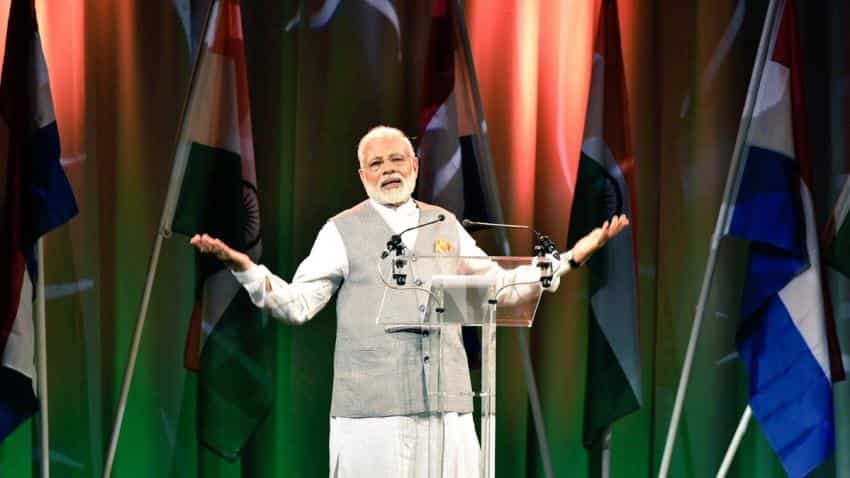 Prime Minister Narendra Modi addresses during a reception organised by the Indian Community in Amsterdam, Netherlands on June 27, 2017. Photo: IANS

After an year of wait nearly 50 lakh central government employees who are waiting for higher allowance under 7th Pay Commission are likely to hear some good news.

Prime Minister Narendra Modi has returned from his foreign visit last night and today he will be meeting his Cabinet members today to take final decision on revised salary as per 7th Pay Commission, media reports suggests.

According to a report by IndiaToday, Finance Minister Arun Jaitley will place the recommendation report before the Cabinet today. Apart from higher allowance, the issues like House Rent Allowance (HRA), Dearness Allowance (DA) and arrears will also be discussed.

Earlier there were reports which mentioned that the rollout of Goods and Service Tax (GST) which is scheduled to be launched on July 1, may further delay the 7th Pay Commission discussion.

The 7th Pay Commission had recommended HRA too be fixed at 24%, 16% and 8% depending on the cities employees work in. But, central government employees demanded 30%, 24% and 16% HRA.

Looking at the high protest by the employees, FM Jaitley last year formed a committee under the leadership of Finance Secretary Ashok Lavasa to look into matter. After several months, Lavasa panel  submitted its recommendation report in April suggesting HRA to be fixed at between 25% and 27%.

Under the 7th Pay Commission, nearly 200 allowances have been subsumed into a smaller batch.