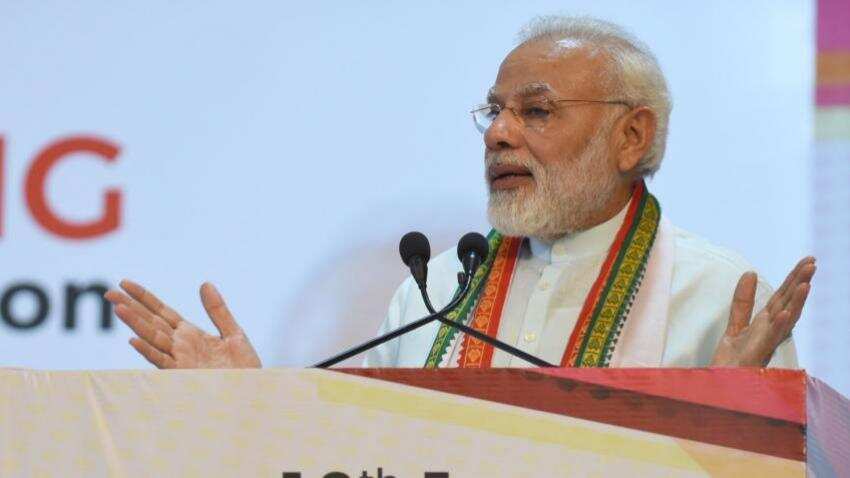 The first advance estimate for Indian economy, at four-year low, is surprisingly lower than even what analysts and experts are forecasting for the country.

When India's GDP numbers came in at 6.3% in the second quarter of FY18 (Q2FY18) from 5.7% in Q1FY18, experts were not convinced that the country's economy is moving on a sustainable path.

It may be noted here that forecasts of Fitch Ratings, CRISIL, Care Ratings and even of RBI are not that lower compared to what the CSO predicted for Indian economy.

Fitch Ratings believes that Indian economy will grow at 6.7% in FY18 from earlier 6.9% citing weaker than expected rebound.

CARE Ratings' estimated that GDP growth would be in the range of 6.7-6.8% for the year.

The CSO's GVA forecast, however, is even lower than the RBI’s estimate of real GVA growth of 6.7% for the fiscal.

Madan Sabnavis and Kavita Chacko, economists at Care Ratings, said, "The difference between the GDP and GVA in FY18 is estimated to be only marginally lower (at 0.4%) than that in FY17 (0.5%)."

"This means that although the GST collections so far (till DEc’17) have not been very encouraging, the government expects the tax collections to improve for the remainder of the fiscal and to be fairly in line with the total collections of last year," the duo added.

They further said, "The slowdown in the Indian economy in FY18 is estimated to be fairly broad based with agriculture, manufacturing and services such as financial, real estate & professional services along with public administration and social services are expected to see a moderation in growth rates." Dr Soumya Kanti Ghosh, Group Chief Economic Adviser at State Bank of India, however, said, "This estimate however has a shelf-life of only two months. This is because CSO will release the first revised estimate of FY15, FY16 and FY17 on 31 Jan’18 and based on that estimate of GDP and GVA for FY18 would be revised further as 2nd advance estimate for FY18 on 28 Feb’18."

Ghosh also pointed out that projections for H2FY18 reveal that CSO is not expecting a big jump in demand. 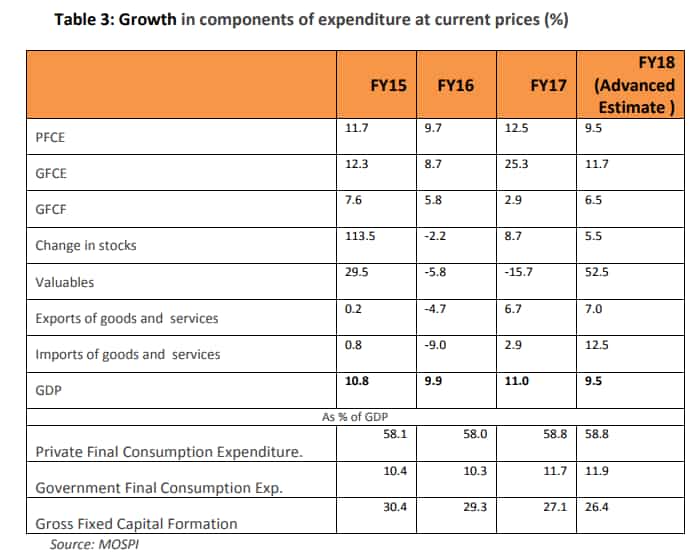 Care said, “This indicates that corporate have not been investing in capital creation this year. A pick up private investment is essential for a rise in overall investment rate.”

Private final consumption expenditure gradually decelerated to 6.5% in Q2FY18 from 6.7% in Q1FY18 and 7.9% in Q2FY17. This indicator accounts 57.3% of GDP this quarter and has remained muted at this level in the last one year.

Interestingly, government's final consumption expenditure also fell to a single-digit at 4.1% this quarter from 17.2% in Q1FY18 – holding 13.5% of GDP. Slower growth in the government spending has been reflected in both GVA and GDP growth figures.

With this, for FY18, the budgeted nominal GDP growth rate was 11.75% which has now been revised down to 9.5. Based on this, Ghosh states that the government will overshoot it's fiscal deficit target by 5 basis points this fiscal. 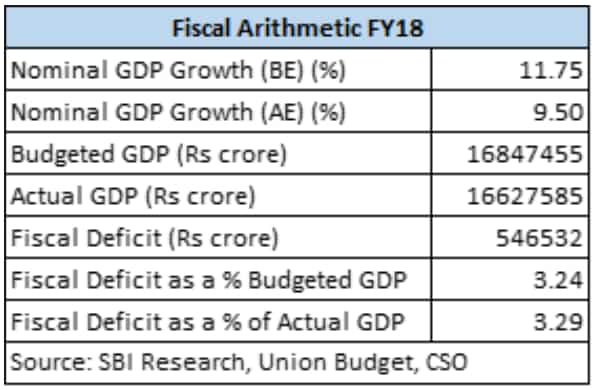 Nevertheless, the forthcoming budget is seen to provide better picture to the government's focus.

Ghosh said, “We don't rule out unveiling of a major agri push in budget in the form of price support scheme for farmers that could have a fiscal implication, but eminently good for growth.”

“Government will continue thrust on infrastructure developments in the country. So, we believe construction sector will expand at a faster pace in next fiscal,” he added.

Analysts at Nomura and Morgan Stanley stated that Indian economy can be expected to grow at 7.5% rate in 2018, as they expressed confidence about prospects for a recovery in private capital spending as demand conditions are improving post demonetisation and GST implementation.