StoneX, one of the big commodity brokers, has increased the surplus for sugar in the upcoming season, Anand said in her report, adding that Asia, as well as Brazil, are increasing their sugar production consistently. 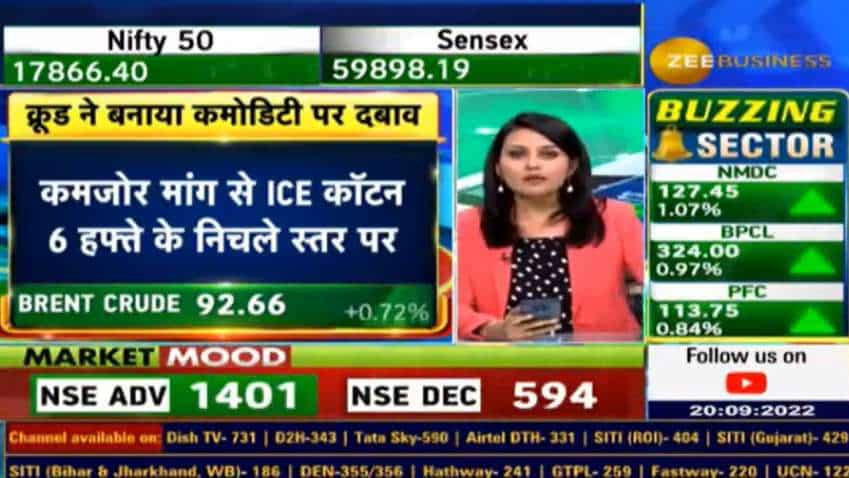 According to Anand, wheat, maize, soyabean have been trading in a range-bound: Zee Business

Agri-Commodities on decline: The commodity market has turned stale after softness in the crude oil as most of the agricultural commodities are indicating pressure, Zee Business Senior Anchor Neha Anand said in her report. She said that the primary reason for the dip in agri-commodity prices is easing supply constraints.

According to Anand, wheat, maize, soyabean have been trading in a range-bound. However, the pressure continues. ICE cotton is at a 6-week low and raw sugar at a month-low, she added.

Biodiesel feedstock is related to all these commodities, be it – cotton, sugar, edible oil, and oil seeds among others, Anand said, adding that whenever crude oil eases, it has a direct impact on these commodities and its prices.

Global wheat is continuously facing pressure as there has been a nice harvest in Russia-Ukraine and export shipments have been rising, she added. Euronext, a Paris-based exchange and a big benchmark of Europe, has reported a huge decline in wheat futures.

Similarly, StoneX, one of the big commodity brokers, has increased the surplus for sugar in the upcoming season, Anand said in her report, adding that Asia, as well as Brazil, are increasing their sugar production consistently.

Zee Business Senior Anchor also pointed out that there has been a clear indication of economic slowdown. Moreover, the dollar index is also strong at a 20-year high.

US Agricultural Department every month comes out with supply-demand estimates. In the recent report, it has stated that commodities like wheat, cotton and oil seeds have reported growth in production, which means supply is normalising, Anand also noted.

According to ICICI Direct Research, “MCX crude prices are expected to trade with a negative bias for the week as investors are bracing for a large increase in US interest rates, which could lead to a recession and reduce fuel demand further.”