In an episode of 'Jain Saab ke Gems',' Zee Business' Managing Editor, Anil Singhvi spoke to Sandeep Jain, founder of Tradeswift Broker Company, about his gem and target for today. 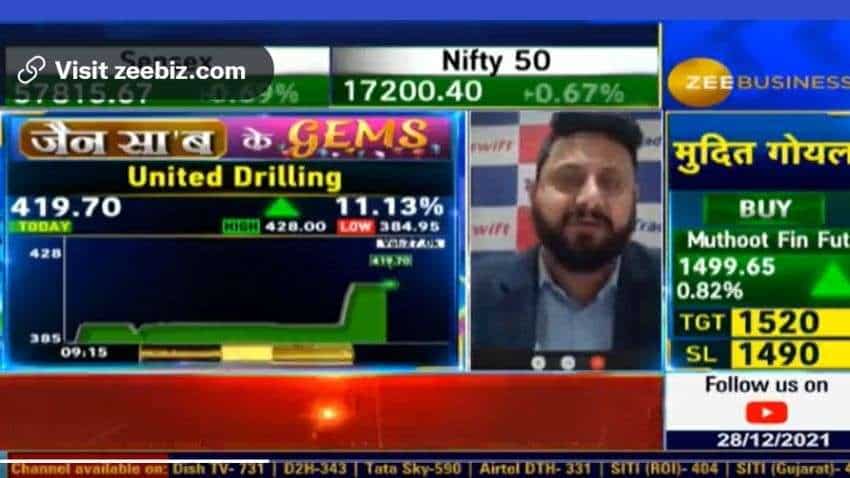 Sandeep Jain recommended United Drilling Tools, where he gave a target of Rs 450.

In an episode of 'Jain Saab ke Gems',' Zee Business' Managing Editor, Anil Singhvi spoke to Sandeep Jain, founder of Tradeswift Broker Company, about his gem and target for today.

Jain recommended United Drilling Tools, where he gave a target of Rs 450.

Talking about his earlier picks, he said: I recommended Jagsonpal Pharmaceuticals Ltd. on October 27, along with Pudumjee Paper Products on July 7." Jain said that Jagsonpal has been performing great. After reaching its target, it has come back to good levels because of under-performing pharma stocks. After PM Narendra Modi announced precautionary shorts in the wake of Omicron, a new Covid variant, pharma stocks have started to surge. Jain said that it is great timing for the pharma stocks. He expects Jagsonpal Pharmaceuticals to achieve Rs 200-225 levels.
Talking about United Drilling, Jain said that it is in the range of 16-17 PE multiple. Explaining the reason behind picking United Drilling Tools, he said that since crude prices are going up, the company makes drilling tools.

The company also consists of independent directors as part of its board. It also has experienced promoters, adding confidence for the investors, Jain added.

Jain said that it had displayed a CAGR (compound annual growth rate) of 32 per cent to 35 per cent in sales for 5 years and a CAGR of 38 per cent in terms of profits.

The company is a zero-debt company, with a return on capital employed is around 22 per cent, and it gives a dividend as well. Promoters have a shareholding of around 75 per cent. FIIs and DIIs hold a few shares in the company, and it has also built a good reputation amongst the individual investors, Jain added.

Jain said that the Company had shown robust growth with strong PAT this quarter.  Adding further, he said that based on its Trailing 12 months (TTM), the Company is at the peak of its profit with a PAT of around Rs 45 crore.

The Company's ratings have stayed intact. The top-level of its stocks was Rs 404, and after correction, it has reached the current level of Rs 390 - Rs 395. Jain said that from here, it could easily reach its previous target of Rs 450 again. Therefore, he recommended buying the stocks at current levels and gave a duration of 6-9 months to reach its target.