Tata Motors shares were on-a-roll on Wednesday, surging by over 15% in the morning trade today, October 13, 2021. 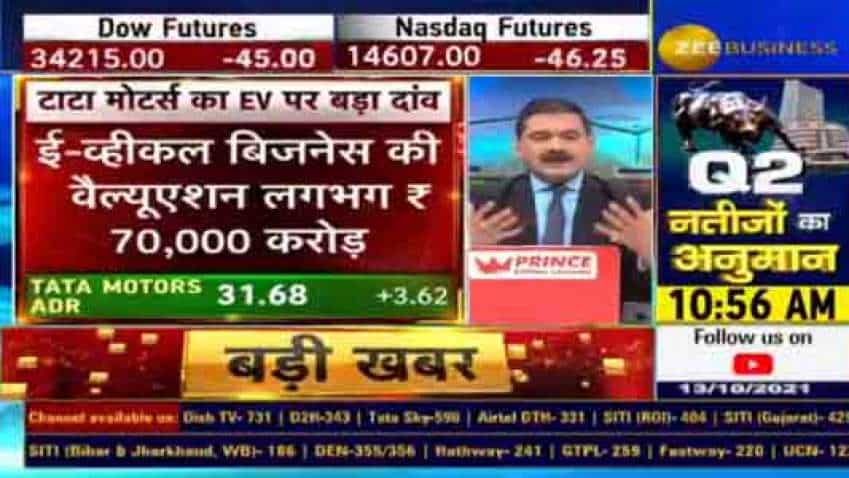 The rally in Tata Motors was backed by a deal between Tata Motors and TPG Rise Climate and Abu Dhabi’s ADQ worth Rs 7,500 crore

Tata Motors shares were on-a-roll on Wednesday, surging by over 15% in the morning trade today, October 13, 2021. Tata Motors also uplifted Nifty50 to reclaim 18,000-level and open at record high. The stocks of Tata Motors also traded on new 52-week high in intraday trade at Rs 499.95 on BSE.

At round 10.30 am on Wednesday, Tata Motors stocks were trading at Rs 490, up Rs 69.20 or 16.44% gain.  The rally in Tata Motors was backed by a deal between Tata Motors and TPG Rise Climate and Abu Dhabi’s ADQ worth Rs 7,500 crore (nearly to $1 billion) in an apparent push to electric vehicle and clean mobility.

Talking about the stellar show by Tata Motors, Zee Business Managing Editor Anil Singhvi said it appears that Indian Automotive manufacturer has taken the leadership. It shouldn't come as a surprise given the momentum in the stock in the last few days and after Morgan Stanely stance on the Indian auto giant.

Foreign brokerage Morgan Stanley has maintained its ‘overweight’ stance on the stock with a target price of Rs 448. " Tata Motors stocks have gained by over 25% in the last four trading sessions. It has shown one side move all this while, " said the Market Guru.

Meanwhile, talking about what pushed this stock to a fresh 52-week high, Zee Business Managing editor said beside other triggers, the deal between Tata Motors and TPG Rise was one of the defining moment recently, and it was bound to show such swing. " It will give Tata Motors enough cash in advance and it does not have to wait for R&D figures to come. TPG has made a valuation of 9 to 10 billion dollars, while Tata Motors' current valuation is around 19 to $20 billion. As per the valuations, Tata Motors is giving half valuation to electric segment, which shows their seriousness in this segment. This news will again help in re-rating of Tata Motors," said Anil Singhvi.

He said with the kind of price movement Tata Motors has shown in the past 4 trading sessions, we may see profit booking at upper level and short-term traders should be wary of this fact too. "If you are a long-term investor, you should know Tata Motors is heading towards Rs 550 to Rs 600," concluded the Market Guru.