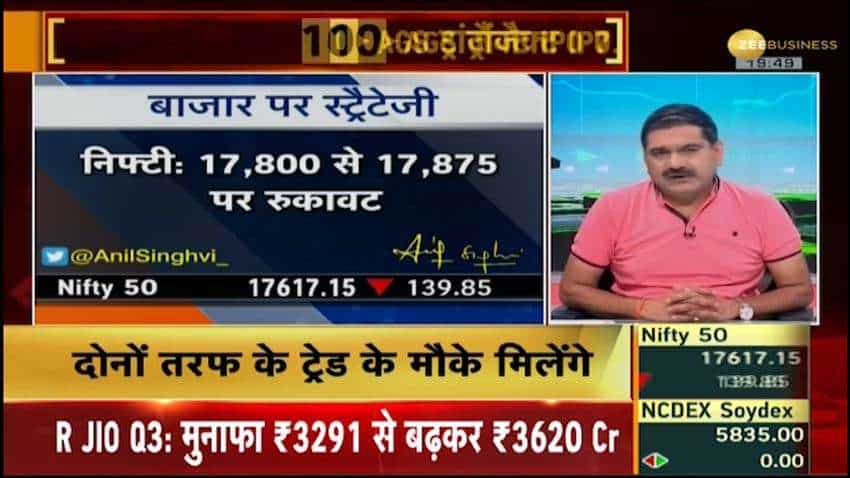 Stocks in the banking, IT, finance and metal sectors created pressure on the stock markets. Sensex and Nifty50 fell around 4 per cent over the week

The Indian stock markets ended on a negative note on Friday. This was the fourth straight correction seen during the week gone by. While the BSE Sensex ended at 59,037.18, down by 427 points or 0.7 per cent from the Thursday closing level, the broader market Nifty50 settled at 17,617.15, down by 140 points ot almosy 0.8 per cent.

Stocks in the banking, IT, finance and metal sectors created pressure on the stock markets. Sensex and Nifty50 fell around 4 per cent over the week.

Zee Buisness Managing Editor Anil Singhvi in his show on Friday had said that the stock markets’ probles only went up on the final day of this trading week. The causes were both from outside and domestic, he further said.

The US markets werer trading with a lot of strength on Thursday but the last hour proved costly with significant fall during the closing time. That had an impact on the domestic markets as well when the resumed trading on Friday.

The other important reason was the selling off by the Foreign Institutional Investors (FIIs) which sold Indian equities worth Rs 9000 cr. And the selling off was in all segments viz, stock futures, index futures and cash markets.

That was a doube whammy and the stock markets could not hold it and opened with a gap on Friday. The Nifty50 broke important levels of 17,600 and later 17,500, though revered during the last hours of the Friday trading session.

Meanwhile, the Bank ifty also went down to 37,200 on the intraday basis but managed to settle above 37,500.

Selling was seen at all levels, the Market Guru said.

He said that the stock markets opening will primarily rely on the Friday FII data and the closing of US markets on Friday.

On Friday, the FIIs were net sellers and sold stocks worth Rs 3148 cr. Meanwhile, the Domestic Institutional Investors were net buyers and bought equities worth Rs 269 cr.

On Wall Street, the Dow Jones Industrial Average slid 1.30%, the S&P 500 fell 1.89% and the Nasdaq Composite lost 2.72%. Both the S&P 500 and the Nasdaq posted their biggest weekly declines since the market crashed in March 2020, Reuters reported.