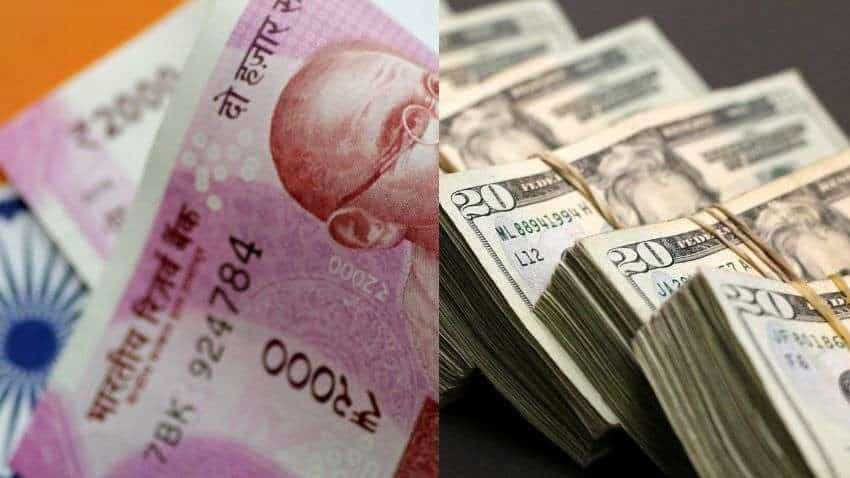 The rupee on Thursday recovered from record lows to settle 20 paise higher at 81.73 against US dollar

The Indian rupee depreciated by 2.4 per cent last week, making it one of the worst performing emerging market currencies, a report said on Thursday.

The currency has held well relative to peers when its performance is compared since the start of the fiscal 2022-23, with a 7.6 per cent depreciation, the report by Acuite Ratings and Research said.

"...In just a span of a week, the Indian rupee has depreciated by 2.4 per cent (to the current level of 81.85 against the USD) making it one of the worst performing EM currencies," the agency said.

According to media reports, the RBI has stayed away from intervening in the market in the last few sessions after weeks of defending it from hitting the psychologically important 80-per-dollar mark.

Policymakers, led by Finance Minister Nirmala Sitharaman, have been insisting that the rupee has performed better than other currencies in the current spell of dollar appreciation.

The rupee on Thursday recovered from record lows to settle 20 paise higher at 81.73 against US dollar ahead of the RBI monetary policy decision on Friday.

There has been a drawdown of USD 100 billion in forex reserves over the last one year as the RBI goes about defending the local currency amid global headwinds, the agency said.

"The RBI has so far shielded the rupee from runaway depreciation by drawing on its foreign currency reserves as a much faster clip than the 2013 taper tantrum episode," the report said.

In 2013 following the taper tantrum, the forex reserves declined by USD 22 billion between April and September 2013, it noted. Total forex reserves have dwindled by almost around USD 100 billion from the peak of USD 642 billion in October 2021 to a two-year low of USD 545 billion as on September 16.

The rating agency's report attributed the demand for dollars to a combination of high inflation, geopolitical instability and the consequent risk-off sentiments.

Both emerging and developed market currencies have been facing pressures from continued dollar strength, with currencies such as euro down 13.2 per cent, and pound sterling and yen down 18.2 per cent each, it said.

The overall import cover is slowly moderating from its peak of over 19 months in early 2021 to nearly 9 months currently, the report said.

Acuite Ratings and Research said the Reserve Bank will have to go for larger rate hikes to bring stability to the rupee.

Axis Bank's Chief Economist Saugata Bhattacharya said there are possibilities of a 0.50 per cent hike in the key rates at the bimonthly policy review on Friday.

He said the RBI will go for minor changes on its growth and inflation forecasts, and added that we should expect steps to limit the rupee depreciation.

Education abroad: How students, parents can finance education when rupee at its low, expert says this

Rupee faces risk of decline to 83-84 against American dollar: Know what analysts say