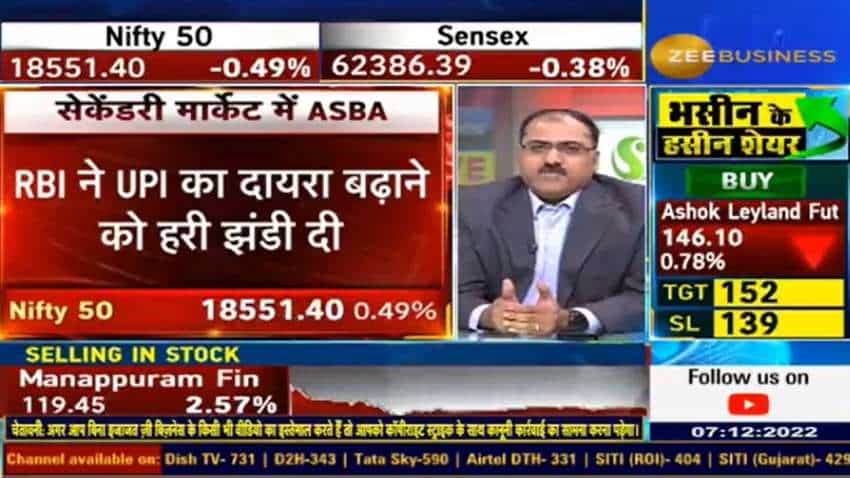 The Reserve Bank of India on Wednesday cleared the way for an Application Supported by a Blocked Amount (ASBA) for the secondary market. This phenomenon is already being practiced in the primary market at present.

Earlier in June 2022, Zee Business had reported that the Securities and Exchanges Board of India (SEBI) may bring a norm to block money through UPI for the secondary markets. Blocking money through UPI is currently being allowed in the primary market (IPO), Associated Editor Brajesh Kumar Mishra said.

When an investor subscribes for an IPO (Initial Public Offer), funds are blocked through UPI and the transactions take place only after the shares of the company are transferred to the applicant’s Demat account.

Enhancing the mandates of a Unified Payments Interface (UPI), the RBI Governor said, “The UPI has emerged as the most popular retail payments system in India. It currently includes functionality to process payment mandates for recurring as well as single-block-and-single-debit transactions.”

The capabilities in UPI will be further enhanced by introducing single-block-and-multiple-debits functionality, the governor said, adding that this facility will enable a customer to block funds in his/her account for specific purposes, which can be debited whenever needed.

This will significantly enhance the ease of making payments for investments in securities including through the Retail Direct platform as well as e-commerce transactions, Das also noted.

The associate editor pointed out that with this initiative of RBI, a message may go to NPCI (National Payments Corporation of India). He noted that soon a meeting or discussion between Banks, NPCI, SEBI, and other authorities may take place on this, and soon this framework will be implemented.