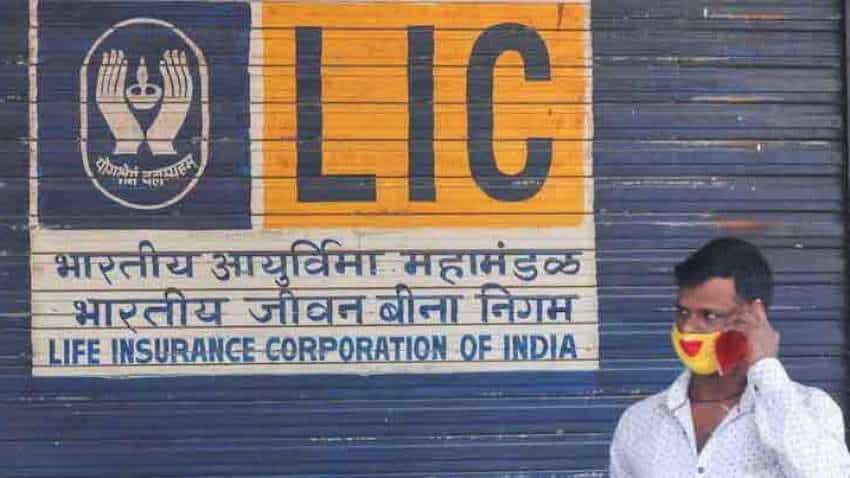 At a market-cap of 4.44 lakh crore as on July 5, the insurance firm has eroded around 1.6 lakh market cap against Rs 6lkah crore when the stock debuted on the exchanges. Source: Reuters

LIC IPO share price today: Shares of Insurance Corporation (LIC) surged two and half percent in Tuesday's intraday trade after brokerage firm Motilal Oswal initiated coverage on the stock of India's largest IPO ever. The brokerage's bullishness is based on attractive valuation and a strong brand of the LIC. It feels at 0.7x FY24E EV, LIC’s valuation appears reasonable considering gradual margin recovery and diversification in business mix though high sensitivity to equity market volatility remains an overhang.

Saying unlike private peers, LIC relies on its dominant agency channel (1.3m agents, 54% of industry as of 31st Mar’22) to distribute insurance products and yet has maintained a strong control on the cost ratios, the brokerage initiated its coverage on the stock with a 'BUY' rating and a target price of Rs 830.

It said Life Insurance Corporation (LIC) has maintained its market leadership position in the life insurance industry underpinned by its strong brand, vast distribution, and superior customer-connect despite the advent of a large number of private players.

Speaking on growth and margin, it expected LIC to deliver approximately 10% CAGR in NBP during FY22- 24, while VNB margin may improve to 13.6%. However, it estimates its operating RoEV to remain modest at ~9.7% on lower margin profile than private peers.

Earlier, other brokerages also initiated coverage on the national insurer stock after the mandatory lock-in period to sell shares was lifted on June 14. They were of the view market estimate of the stock is wrong and it has potential to surprise on the higher side.

Last month, Bank of America (BoFA) maintained an outperform rating on LIC with a target price of Rs 930 per share.

Saying LIC is a global player in its segment, it had said the counter can outperform going forward due to its widening penetration

Similarly, JP Morgan has imitated coverage of the insurance stock with an outperform rating. It assigned a target price of Rs 840 for LIC.

"We believe the market views LIC as an equity market proxy and recent weakness in markets is overdone. We don’t foresee LIC trading at private sector valuations of 2-3 times P/EV (price to embedded value), but our March-23 price target of Rs 840 is based on 1 times FY23 P/EV, which we think is justified on a mostly par back book, excess assets on the B/S (balance sheet), and a 185% solvency ratio,” the brokerage had said.

LIC has also met a target of Rs 700, set by another global brokerage firm, Goldman Sachs. The brokerage had a neutral rating on the stock for target price of RS 700.

However, none of the targets given by these brokerages so far have gone past the ipo issue price of Rs 949.

On Tuesday, shares of LIC jumped two and half per cent to Rs 712.50 in Tuesday's intraday trade. Shares of LIC has gained over seven per cent in the last five trading sessions, and has been trading at a discount of nearly 27% from its IPO price of Rs 949.

The counter was listed at a discount of 8% to Rs 872 apiece on the National Stock Exchange (NSE) against the issue price.

At a market-cap of 4.44 lakh crore as on July 5, the insurance firm has eroded around 1.6 lakh market cap against Rs 6lkah crore when the stock debuted on the exchanges.

LIC: All levers in place to maintain its industry leading position, says Motilal Oswal; recommends buy for this target

Ashish Kacholia portfolio stock: After falling by 29% in one year, this kitchen appliances stock can surge up to 43%