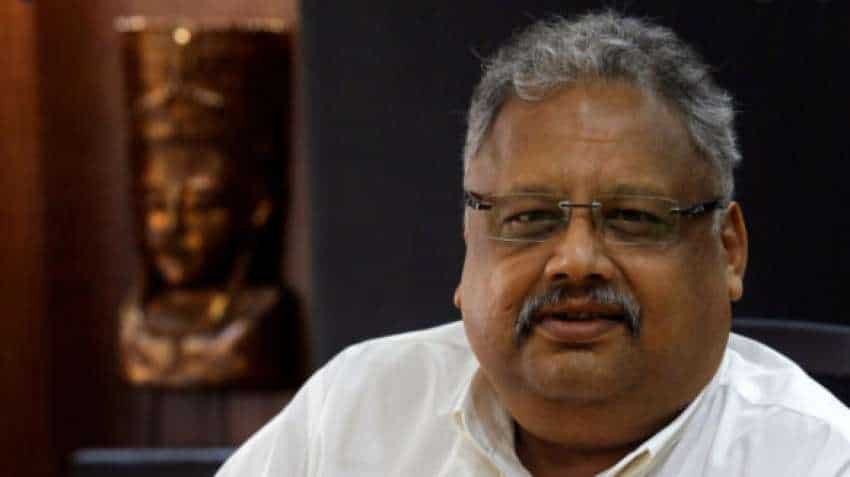 This Rakesh Jhunjhunwala stocks portfolio is in the news - see strategy

Markets are trading at life highs and Big Bull Rakesh Jhunjhunwala has made several changes in his portfolio. He keeps on buying, selling and adding stocks in his portfolio. Rakesh Jhunjhunwala has sold his winning stocks at higher valuations and added back other stocks at lower levels. Investors need to learn his style of trading as well. Many investors just think Jhunjhunwala is a great investor but few are aware he is an excellent trader as well. In many press conferences, he has explained his trading styles. Not only investors admire Jhunjhunwala's investment strategy, the trading community also respects the ace investor for his trading skills as well.

Sumeet Bagadia, Executive Director, Research at Choice Broking recommends trading in some of he stocks in Rakesh Jhunjhunwala portfolio. These include Titan, Tata Motors, Escorts and Lupin. He has briefly given the levels at which the stock should be purchased, stop losses and targets. Traders should understand and read these strategies, it will surely help them to trade effectively and efficiently in these stocks.

Sumeet suggests buying Tata Motors shares in cash at Rs 319 with stop loss of Rs 298 and target of Rs 350. On a monthly chart, Tata Motors stock has been rising from the last couple of months with high volume, which indicates a trend reversal in the counter. On a daily chart, Tata Motors has shifted above the prior swing highs and above the upper Bollinger Band formation, which shows positive strength in the counter. A momentum indicator RSI (14) and MACD indicated positive crossover on the daily timeframe, which suggests bullish move for near term. So based on the above technical aspect, Sumeet is expecting a bullish movement in Tata Motors for near term.

Sumeet recommends buying Titan in cash at Rs 1515 with a stop loss of Rs 1445 and target of Rs 1650. On the daily chart, Titan has been trading in Higher Top & Higher Bottom formation, which indicates a bullish strength in the counter. Moreover, the price has also found the support at Middle Bollinger Band formation and 50 days Simple moving Averages, which support the bullish trend. A momentum indicator RSI (14) and MACD has shown positive crossover, which adds bullish presence in Titan counter. So based on the above technical structures, Sumeet is expecting a bullish move towards the level of 1650 in Titan.

Sumeet suggests buying into Lupin in cash around Rs 1040 – Rs 1050 with stop loss of Rs 1000 and target of Rs 1100. On the daily chart, Lupin has been trading with the support of Rising Trendline and 50 days SMA levels. Moreover, the price has also traded above the Ichimoku Cloud formation with positive crossover, which indicates bullish presence in the counter. A momentum indicator RSI (14) & Stochastic has shown good strength, which supports the bullish trend for the near term. So based on the above structure, Sumeet is expecting an upside move for the near term in Lupin.

Sumeet recommends buying into Escorts in cash at Rs 1400 with stop loss of Rs 1320 and target of Rs 1550. On the daily chart, Titan has given a Symmetrical Triangle Pattern breakout and sustained above it, which indicates bullish sentiments in the counter. On a weekly time frame, Escorts has been hovering near to all-time high with higher volume activity, which suggests a breakout above the prior level of 1453. A momentum indicator RSI (14) & Stochastic has shown positive crossover, which points out more bullishness in the prices.

This Rakesh Jhunjhunwala stocks portfolio is in the news - see strategy

Heranba Industries IPO: Allotment to be out today I Retail Investors anxious and nervous

SBI Home Loan EMI Calculator: Save more than Rs 2000 per month on Rs 50 lakh loan - here is how