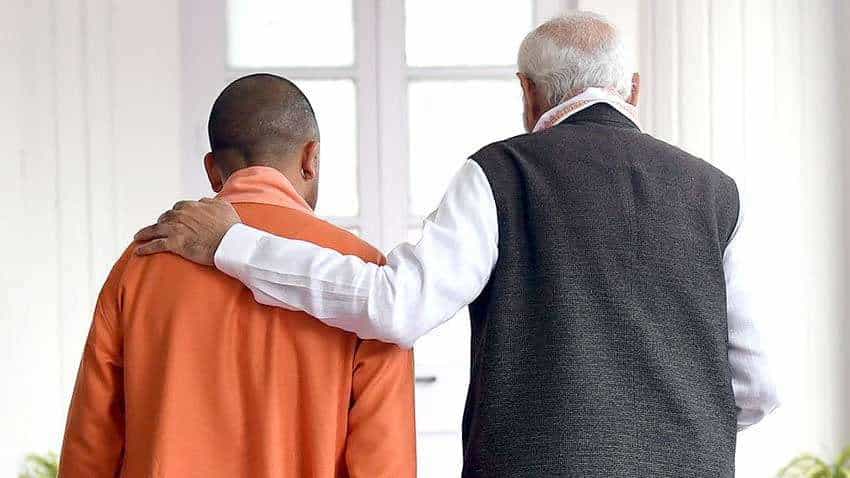 A month after its resounding victory in the Uttar Pradesh Assembly elections, the BJP has swept the biennial polls to the state's Legislative Council by winning 33 out of 36 constituencies.

-According to the results declared on Tuesday, the BJP won 24 of the 27 seats, where polling was held last week.

- In addition, the BJP had won nine of the 36 seats unopposed.

- The results take the BJP past the halfway-mark in the 100-member House.

- Now, it will have 67 members in the upper house of the state legislature.

-Prime Minister Narendra Modi congratulated BJP candidates and workers on the party's victory in the polls. In a Hindi tweet, he said the win reflects people's faith in the BJP's development model.

- Chief Minister Yogi Adityanath congratulated the winners and said the BJP's resounding victory has again established that people of the state have faith in the leadership of Prime Minister Narendra Modi.

Before the polls, the BJP had 34 members in the House.

- A candidate from the Jansatta Dal (Loktantrik)

The Samajwadi Party (SP), the main opposition in the state, drew a blank.

The mood at the BJP office here was upbeat as jubilant party workers danced and distributed sweets to mark the party's victory.

-The highest victory margin was of 5,939 votes in the Moradabad-Bijnor constituency, where BJP's Satyapal Saini defeated Ajay Malik of the SP.

- The victory margin was the lowest in the Jhansi-Jalaun-Lalitpur seat, where Rama Niranjan of the BJP defeated SP's Shyam Sundar Singh by 579 votes.

-CP Chand of the BJP defeated Rajnish Yadav of the SP in Gorakhpur-Maharajganj seat by a margin of 4,432 votes.

- BJP's Hari Om Pandey defeated Heeralal Yadav of the SP by 1,680 votes in the Faizabad seat.

-There were 95 candidates in the fray and the polling was held at 739 centres, according to the Uttar Pradesh chief electoral officer.

-As many as 1,20,657 people were eligible to vote in the polls held on Saturday.

-In the 100-member Legislative Council, the BJP will now have 67 MLCs, Samajwadi Party 17 and the Bahujan Samaj Party four.

-The Congress, Apna Dal (Sonelal) and the NISHAD party have one member each in the House.

-The teachers' group has two MLCs while the Independent group (Nirdal Samooh) and Independents have one MLC each.

-Chief Minister Yogi Adityanath had vacated his council seat recently while former leader of opposition Ahmad Hassan of the SP died in February this year.

-The voters in this biennial election are village pradhans, members and chairman of block development councils and zila panchayats, and corporators in urban areas.
MLAs and MPs also vote.

-The Congress and the BSP did not field any candidate in the Legislative Council elections, making it a direct fight between the BJP and the SP.

UP staring at more power cuts from Tuesday; here is why!

Rupee plunges by 41 paise to record low of 79.36 against US dollar