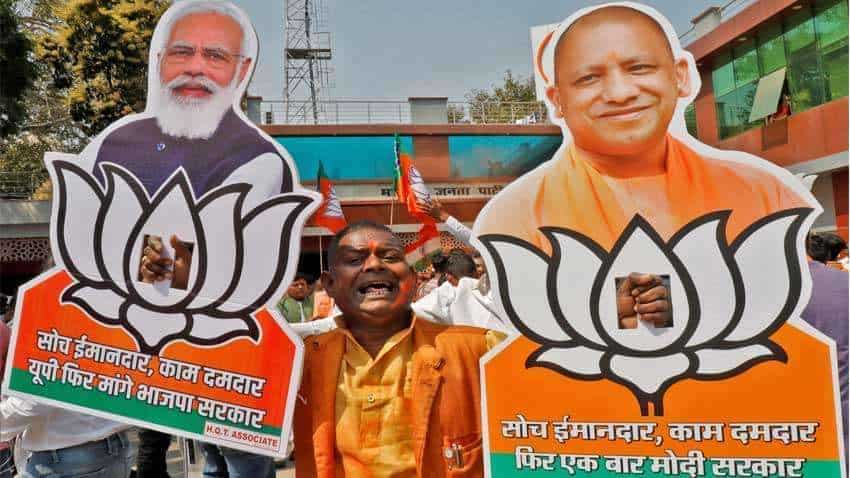 With the BJP looking set to secure a straight second term in Uttar Pradesh, Chief Minister Yogi Adityanath on Thursday appeared to have successfully busted what was dubbed as the "Noida Jinx".

Adityanath also looked set for a victory from Gorakhpur Urban seat while all three BJP candidates in Gautam Buddh Nagar district, appeared set for win, according to poll trends.

Noida, Dadri and Jewar Assembly constituencies fall in the district.

A myth was nurtured for nearly three decades that any chief minister of Uttar Pradesh who visited Noida in Gautam Buddh Nagar district was doomed to go out of power.

In recent history, Mayawati, who took oath as the UP CM in March 2007, had visited Noida in November that year to attend the wedding of close aide Satish Mishra's relative.

However, the BSP supremo's bold move, which was seen as a myth-buster at the time, was followed by her ouster from power from the state in 2012.

Malayam's son Akhilesh Yadav, who became the CM in 2012, had continued the trend of avoiding in-person visit to Noida, often dubbed as the show window to Uttar Pradesh.

In 2013, former UP chief minister Akhilesh Yadav did not attend the Asian Development Bank Summit organised in Noida, when the then prime minister Manmohan Singh was the chief guest.

The "Noida jinx" took root after chief minister Veer Bahadur Singh had to step down in June 1988, a few days after he returned from Noida.

Yogi Adityanath, who had stormed to power in UP in 2017, has visited Noida nearly a dozen times since becoming the UP chief minister and launched the Noida Metro, among other development projects in the region over the years.

In January this year, Adityanath visited Gautam Buddh Nagar to review the COVID-19 pandemic situation and hit out at Mayawati and Akhilesh Yadav and said coming here becomes important for him as the chief ministers who preceded him always hesitated about visiting the district.

"They were afraid. Their own life and political power were the only things important for them. But they had no agenda for economic prosperity, health and well-being of the people of the state and hence they were hesitant about visiting Gautam Buddh Nagar," Adityanath had said.

Adityanath, who is contesting his maiden assembly polls, was leading from the Gorakhpur Urban seat.

Final results for the polls were yet to be announced.

UP Budget 2022-23: Highlights - Important things to know and what CM Yogi Adityanath said

UP Budget 2022: First budget of Yogi Adityanath 2.0 government tabled - 'Will be successful in taking UP's economy to USD 1 trillion'