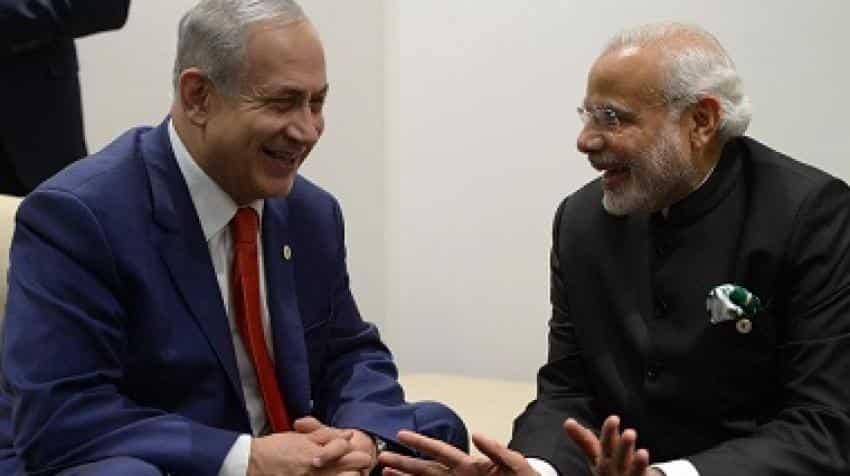 This is the first prime ministerial visit from Israel to India since the visit of then Prime Minister Ariel Sharon. Image source: PTI

With Israel asserting that its relationship with India is much stronger than one vote in the UN, the stage is set for for the arrival here on Sunday of Israeli Prime Minister Benjamin "Bibi" Netanyahu on a six-day trip to give a fillip to 25 years of diplomatic ties between the two countries.

This is the first prime ministerial visit from Israel to India since the visit of then Prime Minister Ariel Sharon.

The visit comes less than a month after New Delhi voted in the UN General Assembly against US President Donald Trump`s decision to recognise Jerusalem as Israel`s capital.

However, Israeli Ambassador to India Daniel Carmon, at a media briefing here, set at rest all speculation over this saying, "I think the relationship is much stronger than one vote in the UN here and there."

He also added: "Sometimes it is India that comes to Israel with a request and sometimes Israel comes to India with a request. We cannot always fulfil those requests. That is why we are two countries, two members of the UN."

B. Bala Bhaskar, Joint Secretary (WANA) in the Ministry of External Affairs, told the media that when Prime Minister Narendra Modi and Netanyahu will sit for a bilateral summit here on January 15, both sides "will be discussing a lot of issues".

Netanyahu`s visit also assumes significance as it comes just over six months after the visit of Modi to Israel, the first ever Indian prime ministerial visit to the West Asian nation

Stating that bilateral cooperation has been expanded to several areas, Bhaskar said: "It all started with agriculture, now we have large areas of cooperation predominantly dominated by technology collaboration, innovation, R&D, science, space, so these are actually very qualitative engagements characterised by technological collaboration and innovation."

According to Carmon, though cooperation in agriculture and water were the highlights of Modi`s visit to Israel in July last year, this time innovation will top the agenda.

The Ambassador described innovation as a "cross-cutting issue" and said this would be reflected in the discussions between Modi and Netanyahu.

Carmon referred to Netanyahu`s scheduled visit to the iCreate Innovation Centre for Entrepreneurship and Technology on the outskirts of Ahmedabad and said that the centre "has a big clement of Israeli ecosystem in innovation".

Bhaskar said the ties between the two countries have been expanding in the areas of agriculture, water, innovation, entrepreneurship development, space, education, culture, homeland security and defence.

"We have upgraded our relationship to the strategic level with a special focus on agriculture and water," he said.

He said the bilateral commerce between the two countries stood at $5 billion in 2016-17 which did not include defence trade.

There is speculation about the revival of talks on India`s purchase of 8,000 Spike anti-tank guided missiles from Israel that was cancelled last year.

Carmon, on his part, said that the Spike project is an example of Israel engaging in the Make in India programme.

Stating that the project would be a boost to India`s economy, the Ambassador said: "If there is a problem, I hope it would be solved."

Apart from the summit-level meeting, the second India-Israel CEOs Forum will be held as also a series of other meetings between both sides in New Delhi and Mumbai during the course of the visit. Netanyahu will be accompanied by a delegation of 130 Israeli business leaders.

Asked about the status of the India-Israel free trade agreement (FTA), Carmon said that "the FTA is definitely on our agenda".

Netanyahu is also scheduled to visit a Centre of Excellence in Agriculture at Vadrad, Gujarat, that has been set up with Israeli assistance.

Carmon said that by the end of this month, there will be 22 centres of excellence set up with Israeli aid up and running across India.

These centres cover areas like vegetables, citrus fruits, dates, mangoes, flowers, beekeeping, he said, adding that "we are now starting work on a dairy farm in Haryana".

Netanyahu will also be accompanied by Moshe Holtzberg, whose parents, Rabbi Gavriel and Rivka Holtzberg, were killed in the 2008 Mumbai terror attacks.

Moshe, who was only two years old then, will visit Chabad House, where his parents were killed.

Another major highlight of Netanyahu`s visit will be his participation in this year`s Raisina Dialogue, India`s flagship conference on geopolitics and geo-economics.