On January 26, 2022, the 73rd Republic Day of India, Prime Minister Narendra Modi officially commenced the events of the Republic Day by paying respect to the fallen heroes at the National War Memorial. 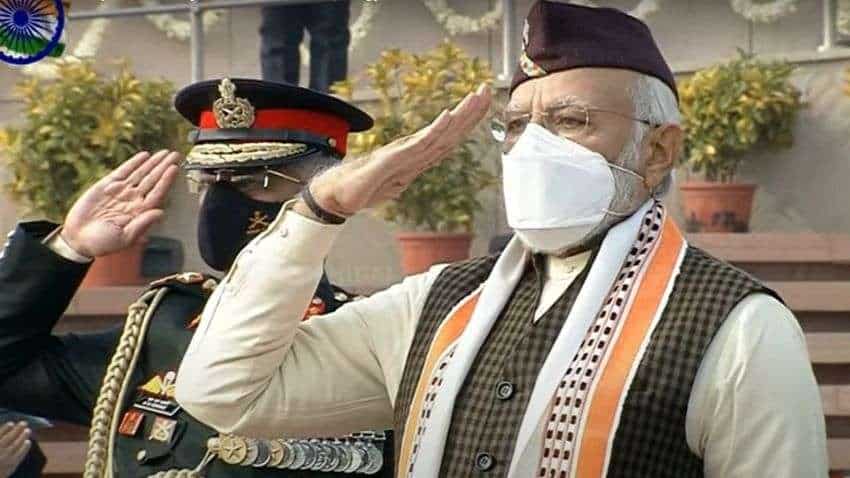 On January 26, 2022, the 73rd Republic Day of India, Prime Minister Narendra Modi officially commenced the events of the Republic Day by paying respect to the fallen heroes at the National War Memorial.

This year also, Prime Minister Narendra Modi kept up with his tradition of wearing hear gears keeping up with the diverse culture of the country. PM Narendra Modi was spotted wearing a unique cap from the hill state of Uttarakhand as he arrived to pay homage to the Indian soldiers at the National War Memorial on India's 73rd Republic Day.

The PM was also seen wearing a ‘Brahmakamal’, which is the state flower of Uttarakhand. PM Modi is very fond of ‘Brahmakamal’ and uses the flower whenever he performs ‘pooja’ at Kedarnath.  In addition to that, PM Modi also wore a stole from Manipur.

Incidentally, last year, PM Modi wore a colourful ‘Halari Pagh’ (royal head turban) that was gifted to him by Jamnagar Royal Family for the event.

The  interested individuals can watch the Republic Day 2022 events on various platforms. The Ministry of Defence has developed a website www.indianrdc.mod.gov.in and a YouTube channel, “Indian RDC” to host the events virtually.

On January 26, India celebrates Republic Day to mark the day when the Constitution of the country came into existence.

A salute of 21 guns and the unfurling of the Indian National Flag by Dr. Rajendra Prasad heralded the historic birth of the Indian Republic on that day. Thereafter, January 26 was decreed a national holiday and was recognised as the Republic Day of India.

PM Narendra Modi to visit Nepal briefly on May 16; to go to Gautam Buddha's birthplace Lumbini