On January 26, India celebrates Republic Day to mark the day when the Constitution of the country came into existence. 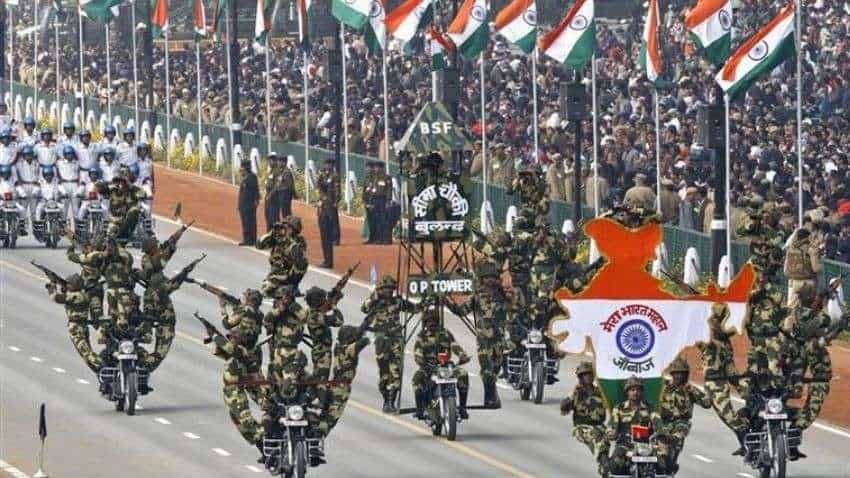 Republic Day 2022: Check 73rd R-Day parade timings, when and where to watch LIVE and other details. Source: Reuters

Republic Day 2022: Today is India's 73rd Republic Day. On January 26, India celebrates Republic Day to mark the day when the Constitution of the country came into existence.

A salute of 21 guns and the unfurling of the Indian National Flag by Dr. Rajendra Prasad heralded the historic birth of the Indian Republic on that day. Thereafter, January 26 was decreed a national holiday and was recognised as the Republic Day of India.

The main attraction of Republic Day 2022 is the Republic Day parade. The parade starts with unfurling of the national flag by the President of India. Following this, there is the marching of several regiments of the Army, Navy, and Air Force, along with their bands from the Rashtrapati Bhawan along the Rajpath, to India Gate and finally  to Red Fort.

This year, the Republic Day live coverage will be broadcasted across the country, starting from 9:15 AM on January 26 till the end of events at Rajpath.

The  interested individuals can watch the event live on various platforms. The Ministry of Defence has developed a website www.indianrdc.mod.gov.in and a YouTube channel, “Indian RDC” to host the events virtually.

Apart from that, the live coverage will be telecasted on on all channels of Doordarshan across the country. Live coverage will also be available on DD National, DD News YouTube channels and on NewsOnAir app and website.

In a statement, the Information and Broadcasting Ministry said the public broadcaster has placed cameras at strategic locations such as national stadium dome, the National War Memorial and various other places between India Gate and the Rashtrapati Bhavan for the live coverage of the Republic Day celebrations.

Furthermore, to give people a bird's eye view of the entire celebrations, two 360-degree cameras have been installed, one at Rajpath and the other on the top of the India Gate, it said.