RBI kept repo rate unchanged at 6% in the last monetary policy meet with a neutral stance citing that rising consumer prices will threaten the trajectory for inflation. 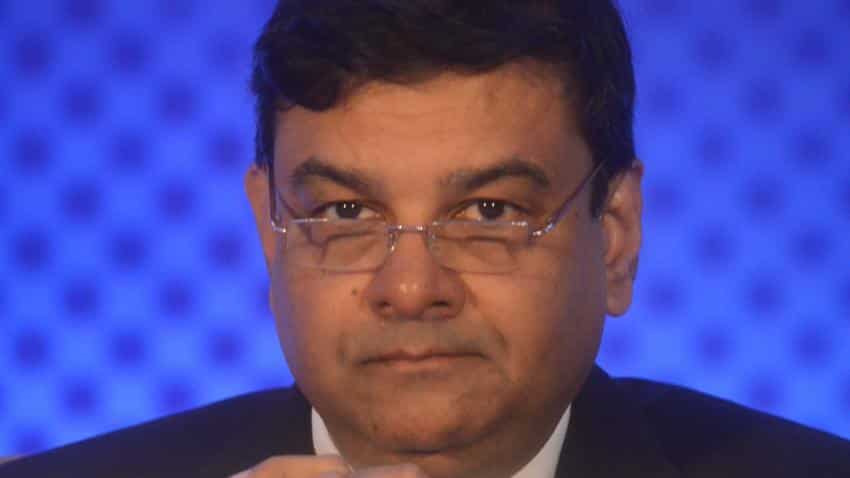 According to reports, discussion on the monetary policy has already taken place on Tuesday and the resolution would be made public by Patel today.

RBI kept repo rate unchanged at 6% in last monetary policy meet with a neutral stance citing that rising consumer prices will threaten their trajectory for inflation.

Analysts are predicting that RBI will maintain a status quo in this policy announcement.

Morgan Stanley in its research report stated that given the rise in headline inflation and steady core inflation, we do not expect the RBI to ease further in the December monetary policy meeting.

Nomura also believes that House Rent Allowance and Goods and Services Tax (GST) effects are to be blamed for higher underlying momentum in inflation and accordingly, the RBI is expected to stay on hold through 2018 which also includes December policy.

Similar opinions have also come from analysts at Care Ratings, ICRA, Nirmal Bang and many others.

The government as well as India Inc also anticipate a rate cut from RBI as they believe inflation has been in check.

Whether RBI chooses to maintain a 'status quo' or 'rate cut', well it will be keenly watched. However, there is a list of factors that will surround RBI's decision in this policy statement.

India's GDP in Q2FY18 revived to 6.3% compared to 5.7% in June quarter, however it was lower from 7.5% in the corresponding period of the previous year.

source: tradingeconomics.com
Although despite the acceleration many economists are not convinced and have trimmed down the country's GDP growth rate for the entire fiscal.

Fitch Ratings recently cut GDP growth forecast to 6.7% in FY18 from earlier 6.9% citing weaker than expected rebound. CRISIL too has projected India's GDP at 6.8% with downside bias from previous 7% for FY18.

In last policy announcement, RBI revised the projection of real GVA growth for 2017-18 to 6.7% from the August 2017 projection of 7.3% with risks evenly balanced. Changes can be expected after the Q2 rise in this indicator from RBI.

source: tradingeconomics.com
Core inflation remained with the RBI's measure at 4.6% on year-on-year (YoY) basis, despite rise in petrol and diesel prices.

According to  Nomura, BofAML and Morgan Stanley, inflation may rise further due to rise in vegetable and oil prices.

source: tradingeconomics.com
Build up inflation rate in the financial year (FY18) so far was 2.03% compared to a build-up rate of 3.53% in the corresponding period of the previous year.

Increase in WPI during October’17 was mainly on account of the increase in food articles and fuel. Price increases of manufactured items as a whole saw a slight moderation in October’17 from month ago levels.

source: tradingeconomics.com
Lower than expected growth in industrial output indicated that the festive and post-harvest demand has been rather muted and has not been enough to revive the industrial segment. The unfavourable base effect has also weighed on the growth during the month.

Manufacturing sector rose to a 10-month high of 3.4% this month, but it was lower against 6% growth a year ago in the same period. Of this sector, 11 out of 23 industries group saw positive numbers and the same was attributed partly to the post GST-led re-stocking.

“The upward movement in the headline index was driven by a marked increase in output. Furthermore, the rate of expansion quickened to the strongest since October 2016. A combination of higher order book volumes and a decrease in GST rates reportedly contributed to greater production,” the Nikkei report read.

This indicator grew at slower pace of 4.7% in October, chiefly due to subdued performance from sectors like cement, steel and refinery segment.

The surplus in systemic liquidity that got entrenched after demonetisation has receded sharply in the recent months; funds absorbed by the RBI under the LAF eased to a low Rs 0.2 trillion on November 27, 2017 from the peak of Rs 5.5 trillion on March 6, 2017 and Rs 3.2 trillion as on September 1, 2017, aided by a number of factors. 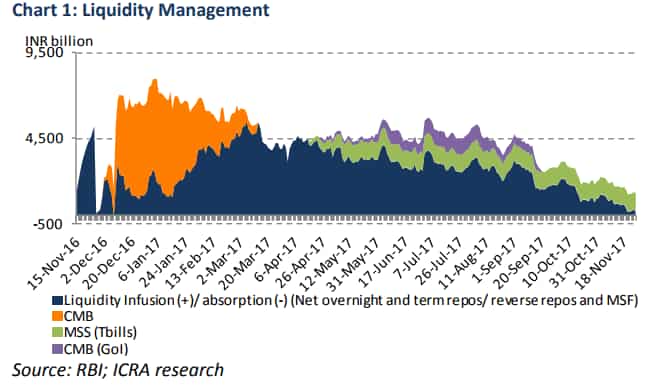 Trends in Currency with Public 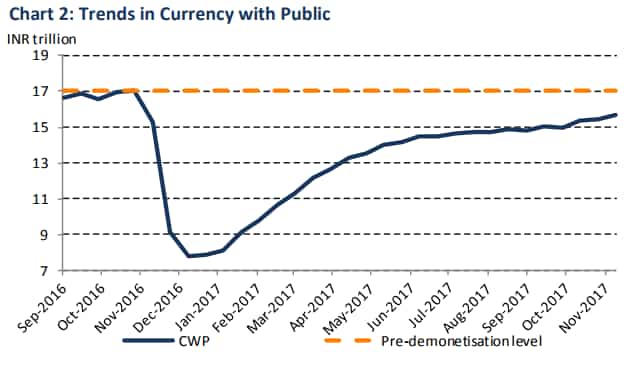 Additionally, the average fortnightly increase in currency with public has more than doubled to Rs 18,300 crore during the period from September 15, 2017 to November 10, 2017, from Rs 9,600 crore between June 9, 2017 and September 1, 2017, led by the seasonal increase in demand for cash related to the festive season and the kharif harvest.

Data compiled by RBI reveals that aggregate deposits of SCBs recorded a single-digit growth rate of 8.2% in this quarter, compared to previous 12.6% in the previous quarter. While bank credit growth came down further to 6.5% in Q2 versus rate of 8% in June quarter.

Interestingly, as on November 10, 2017 fortnight, the bank deposits moderated to 8.1% on yearly basis compared to 9.1% on September 1, 2017, led by diversion of savings to equity markets and higher-interest-bearing small savings schemes.

While during the fortnight, non-food bank credit rose to 9% from 6.9% on September 1, 2017. This ICRA believes was driven by a favourable base effect, healthy demand in retail loans, as well as the rise in working capital needs of the corporate sector following the implementation of the GST and the recent uptick in commodity prices.

G-Sec yields have risen by over 35 basis points since the RBI’s last meeting because of a combination of factors like risk of fiscal slippage and rising inflation, declining liquidity and foreign investment quotas nearly hitting the cap. 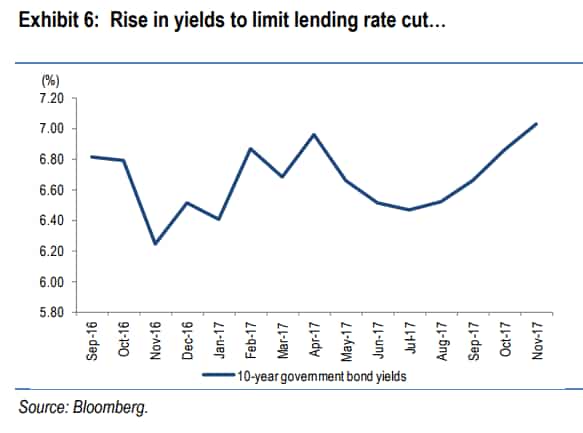 Nirmal Bang said, "The rise in G-sec yields is likely to adversely impact treasury income of banks, which along with the closing gap between credit and deposit growth reduces the scope for further reduction in lending rates."

RBI has conducted open market sales of government securities (G-sec) to absorb Rs 0.5 trillion of surplus liquidity in five tranches since September 2017. This is in addition to the OMO sales of Rs 0.4 trillion that were conducted in July-August 2017. 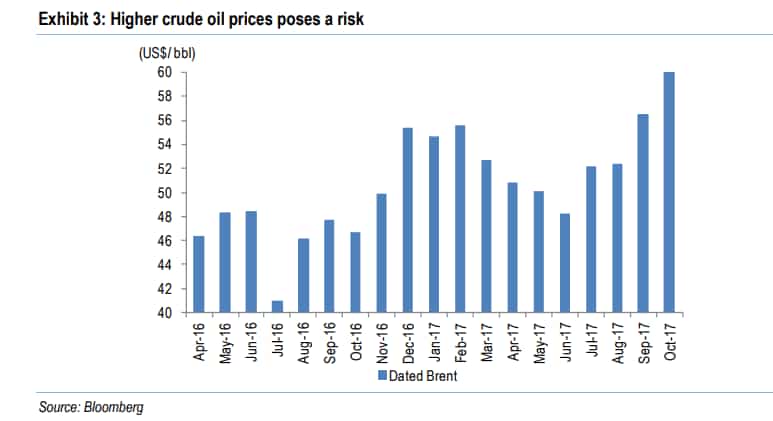 Notably, over the past two months, crude oil prices have increased by ~22% from $52.3 per barrel in August-end.

RBI saw a decline in purchase of foreign currency in the spot market to $ 1.3 billion in September 2017 from an average of US$ 3.6 billion between May 2017 and August 2017, which would have eased the incremental INR liquidity being infused by such operations. 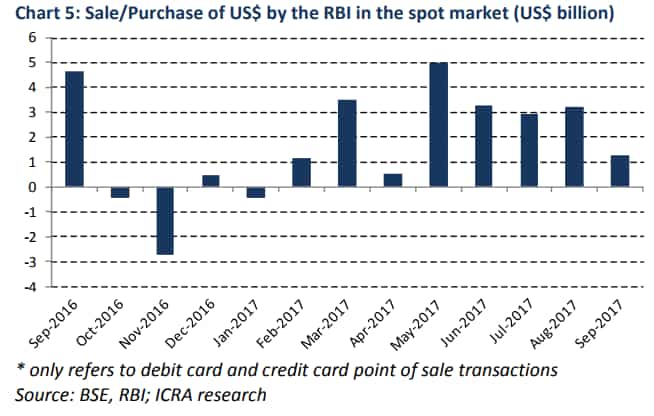 At the same time, the outstanding dollar purchases through forward contracts increased to $ 31.1 billion in September 2017 from $ 13.6 billion in May 2017.

Vodafone Idea board to discuss Rs 1,600 crore debenture issue for ATC on January 31