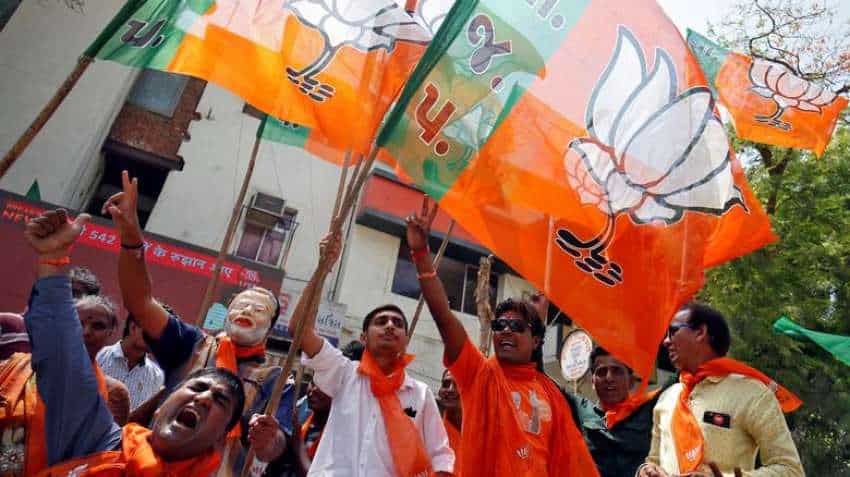 Of the 18 candidates, six are from Uttar Pradesh: Reuters

Union minister Mukhtar Abbas Naqvi's name is also missing from his party's list. However, the BJP is yet to announce at least two more Rajya Sabha candidates, both from Uttar Pradesh.

The BJP has also not renominated Dushyant Gautam, Vinay Sahasrabuddhe and OP Mathur.

Of the 18 candidates, six are from Uttar Pradesh.

Former BJP MLA Radha Mohan Das Aggarwal who had left his Gorakhpur Urban constituency for Chief Minister Yogi Adityanath to contest the recent assembly polls was among the candidates.

The party has fielded two women -- Darshana Singh and Sangeeta Yadav -- from the state. Singh is a former state head of the party's women wing, while Yadav is a former party MLA from Chauri Chaura in Gorakhpur.

The party announced the names of two candidates each from Karnataka and Bihar and one candidate each from Madhya Pradesh, Rajasthan, Uttarakhand, Jharkhand and Haryana.

The party has given ticket to former MLA Krishan Lal Panwar from Haryana in place of Gautam.

Kavita Patidar will be the party's nominee from Madhya Pradesh, Ghanshyam Tiwari from Rajasthan and Kalpana Saini from Uttarakhand.

From Bihar, the party has fielded Satish Chandra Dubey and Shambhu Sharan Patel.

As per numbers, the BJP will comfortably win two seats while there could be fight on the third.

Aditya Sahu is now BJP's candidate from Jharkhand, from where Naqvi was Rajya Sabha member.

Union Finance Minister Sitharaman and actor-turned-politician Jaggesh will be the party's nominee from Karnataka.

Elections will be held on June 10 to fill 57 Rajya Sabha seats from 15 states falling vacant due to the retirement of members on different dates between June and August. The last date for filing nominations is May 31.

This election assumes importance as it will be held just a month before presidential elections.

This BJP MP says 'no mehngai' India, then corners opposition on ‘revadi’ culture