Modi said he was at a loss of words to describe what he felt while he was sitting before the statue. 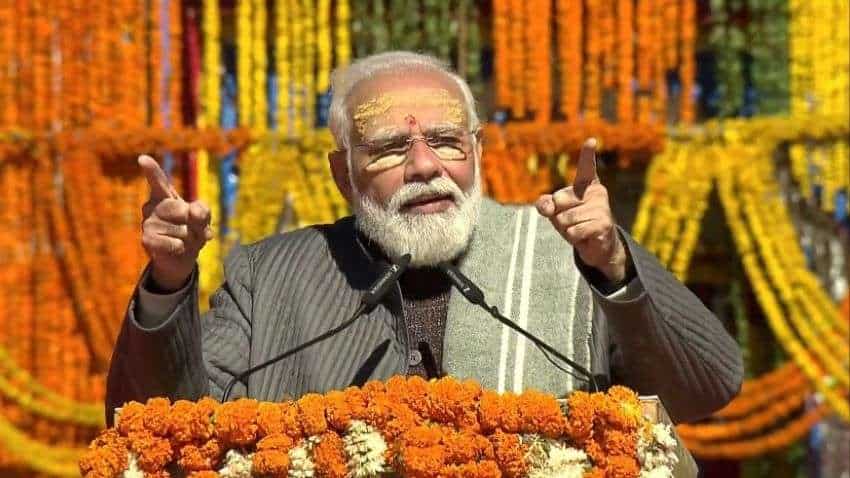 Modi said he was at a loss of words to describe what he felt while he was sitting before the statue. Image Source: BJP India/Twitter

The decade belongs to Uttarakhand, there will be unprecedented boost to connectivity in the region in the coming years and migration of people from the hills will stop, Prime Minister Narendra Modi said on Friday.

He was addressing a large gathering of teerth-purohits and devotees at the Kedarnath temple after unveiling a 12-foot statue of Adi Guru Shankaracharya at the seer's rebuilt samadhi.

The prime minister sat at the foot of the statue for a while after unveiling it and then proceeded to talk a walk around Kedarpuri to review the reconstruction work carried out over the last few years.

Modi said he was at a loss of words to describe what he felt while he was sitting before the statue.

"Some experiences are so sublime that words are not enough to describe them," he added.

The energy of the eighth century philosopher will continue to drive the country on the path of development for thousands of years, Modi said.

The prime minister reached Kedarnath from Dehradun in the morning and offered prayers at the Shiva temple.

After the prayers, he walked to the "Bheem Shila" behind the temple. The huge rock had rolled down the mountains during the June 2013 deluge and stopped right behind the temple, and is believed to have protected it from the disaster.

Work on the Shankaracharya statue, weighing around 35 tonnes, had begun in 2019. Its unveiling was streamed live at 12 jyotirlingas, four mutts or monasteries established by the eighth century seer, his birth place and a number of prominent temples across the country.

Modi also inaugurated and laid the foundation stone of a slew of reconstruction projects worth over Rs 400 crore at Kedarpuri.

He said the rebuilding work after the 2013 deluge seemed impossible in the beginning but his faith in Baba Kedar and experience of rebuilding earthquake-hit Kutch as the Gujarat chief minister made him believe it was possible.

The work done in Kedarpuri will make pilgrimage to the Himalayan temple smoother, besides making the lives of teerth-purohits living there easier, Modi added.

Uttarakhand Chief Minister Pushkar Singh Dhami and Governor Lt Gen Gurmit Singh (retd) were also in Kedarnath along with the PM, whose visit came a day ahead of the Himalayan temple's closure for winter on Saturday.

Modi was received at the Dehradun airport in the morning by the governor and the chief minister and his cabinet colleagues Subodh Uniyal and Ganesh Joshi, besides Assembly Speaker Premchand Aggarwal.

Kedarpuri reconstruction is considered the prime minister's dream project whose progress is reviewed personally by him at regular intervals.

Pariksha Pe Charcha Certificate: Want to get this certificate? Know registration, essay topics and other details