The airport will also be the country's "first net zero emissions airport". 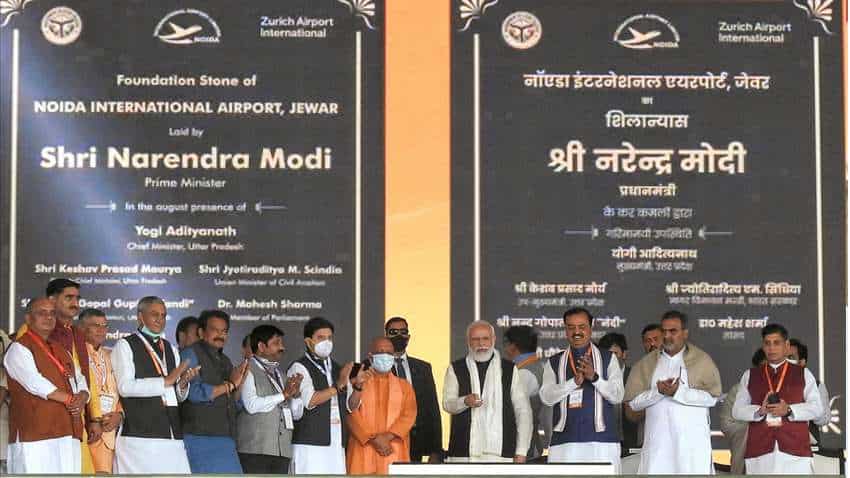 It will be one of the largest aerodromes in Asia. IANS.

- It will be one of the largest aerodromes in Asia.

- The airport, the second international aerodrome in Delhi-National Capital Region, is expected to be operational by September 2024 with an initial capacity to handle 1.2 crore passengers per annum.

- The airport, spread over 1,330 acres of land, will be developed by Zurich Airport International AG.

- On Wednesday, Civil Aviation Minister Jyotiraditya Scindia said the Noida International Airport will become one of the largest airports in Asia.

- It will be the fourth largest international airport in the world and the project would create more than one lakh job opportunities, according to the Uttar Pradesh government.

- The first phase of the aerodrome is being done at a cost of more than Rs 10,050 crore, and the ground work regarding land acquisition and rehabilitation of the affected families has been completed, an official release said on Tuesday.

-The airport at Jewar will help decongest the Indira Gandhi International (IGI) airport in the national capital. It is strategically located and will serve the people of cities including Delhi, Noida, Ghaziabad, Aligarh, Agra, Faridabad and neighbouring areas, the release said.

-The airport will also be the country's "first net zero emissions airport".

-According to the Union government, the airport will be the logistics gateway of northern India, and with its scale and capacity, the aerodrome will be a "gamechanger" for Uttar Pradesh.

-For the first time, an airport has been conceptualised with an integrated multi-modal cargo hub, with a focus on reducing the total cost and time for logistics.

-Among other aspects, the airport will be linked to the planned Delhi-Varanasi high speed rail, enabling the journey between Delhi and airport in only 21 minutes, the release said.

-There will also be a state-of-art MRO (maintenance, repair and overhauling) service.

-The airport will introduce a swing aircraft stand concept, providing flexibility for airlines to operate an aircraft for both domestic and international flights from the same contact stand, without having to re-position the aircraft.

Currently, there are nine operational airports in Uttar Pradesh, including three international aerodromes at Lucknow, Varanasi and Kushinagar. Eight more airports, including the one at Jewar, will be coming up in three years.

The six other operational airports in the state are at Agra, Gorakhpur, Kanpur, Prayagraj, Hindon and Bareilly.

On Wednesday, Civil Aviation Secretary Rajiv Bansal said five aerodromes are expected to be ready at Aligarh, Chitrakoot, Azamgarh, Mordabad and Shravasti in 2022.

In 2023, two more are expected to come up at Ayodhya and Muirpur.