Ahead of the oath-taking ceremony, market benchmarks like Sensex and Nifty traded on positive note on Thursday during market hours. 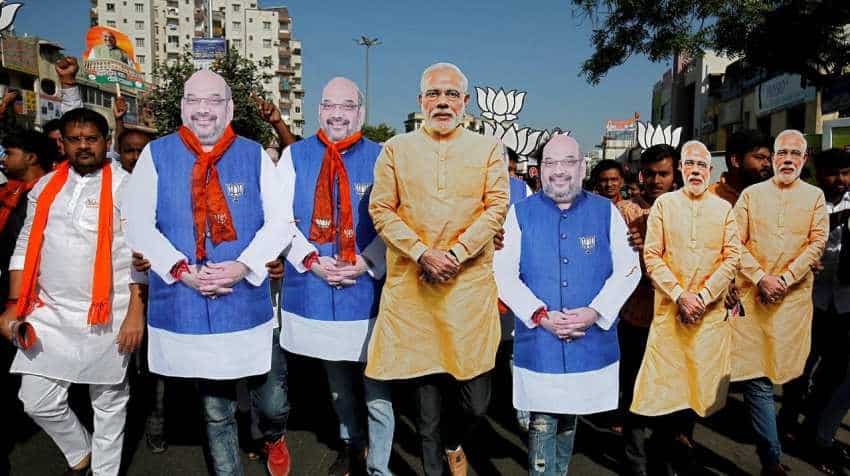 Some 6,000 invitees including foreign, allies, Bollywood biggies and adversaries will be part of the ceremony. Photo: Reuters

Less than two hours are left for PM Narendra Modi to take his oath as PM of India on Thursday. The ceremony will resume around 7pm, and some 6,000 invitees including foreign, allies, Bollywood biggies and adversaries will be part of it. A lot is expected, especially many are eyeing for new positioning in cabinet ministers who will lead Modi 2.0 for 5 years in India. Just few minutes ago it has been confirmed that Amit Shah, President of BJP Party who has been beside Modi for over two decades, will be part of cabinet. Most likely predictions are for Shah to take power as Finance Minister. Apart from that, what will be new designations of Piyush Goyal, Nitin Gadkari, Smriti Irani and much more. Ahead of the oath ceremony, market benchmarks like Sensex and Nifty traded on positive note the entire Thursday market hours. The Sensex finished at 39,831.97 up by 329.92 points or 0.84%. While, the Nifty 50 completed at 11,945.90 above 84.80 points or 0.71%.

Talking about Thursday’s market performance, Mustafa Nadeem, CEO, Epic Research said, “Nifty bounces back to 11900 levels and closes with confidence near the day's high as expiry play turns a trap for bears. A bounce back was seen from lower levels as buying emerged and key indices that have higher weight were seen contributing largely in this pullback. It was a day for blue chips that led to recovery which included stocks like HDFC Duo, Infosys, TCS, Kotak bank, Reliance, and other bluechip stocks. The support placed at 11850 - 11860 worked as an inflection point as it was also a previous swing high and further a point of control for bears. This did favor the bearish sentiments in the last few weeks every time it was tested but bulls happened to hold on to it this time and the recovery was seen in prices.”

Nadeem added, “Amid negative global cues, the relief for traders was the decline in volatility which was up in the last few days. The sudden drop also worked positively for the market. It was an expiry play and now the eyes would be position built up in June series. The rollover numbers were rather low and lower than their recent monthly average. Nifty with 59% and bank Nifty with 71% shows much lower rollover for the Next series.”

Going forward, explaining the importance of oath ceremony and portfolios given to MPs on markets, Nadeem highlighted saying, “Oath Taking ceremony has also some importance for the Markets as it is crucial that which portfolios are given to which MPs. There has been great inclusion and consolidation in the financial sector and some very big aspirational deals in the Defence sector. The Four key depts would have an impact such as Home, Defense, external and Finance. Though for markets a lot would also depend on sectors such as power, energy, infrastructure (transportation).”

Adding he said, “The government is expected to put out an efficient team with a good track record. Candidates who have performed well in the last five years and are able to deliver more in the coming years; with much faster speed. Hence, expanding the growth to key sectors as mentioned above which will certainly help the market to discount the long term policies and factors that will drive the economy.”

Here’s the list of MPs who are likely to be part of NDA 2.0 cabinet:

Many are expecting Irani to get some major position, after she defeated Congress Party leader Rahul Gandhi in his own home ground Amethi. Irani is now referred as Amethi slayer.

Which stocks should you buy?

Nadeem highlights three stocks which can be best bet on Friday.

EDELWEISS - The stock has given the breakout of resistance on the daily chart and closed near today’s high. The RSI is also showing strength on the daily chart. We recommend buying above 194 for the target of 198 with the stop loss of 190.

IRB - The stock has been performing negative for three trading sessions and closed in the red. The RSI is also showing reversal on the daily chart. We recommend selling below 126.50 for the target of 123 with the stop loss of 128.50.

TATAMOTORS - Stock is consolidating and showing weakness on the daily chart. It has a trendline resistance on the hourly chart. We recommend selling around 175 for the target of 170 with the stop loss of 178