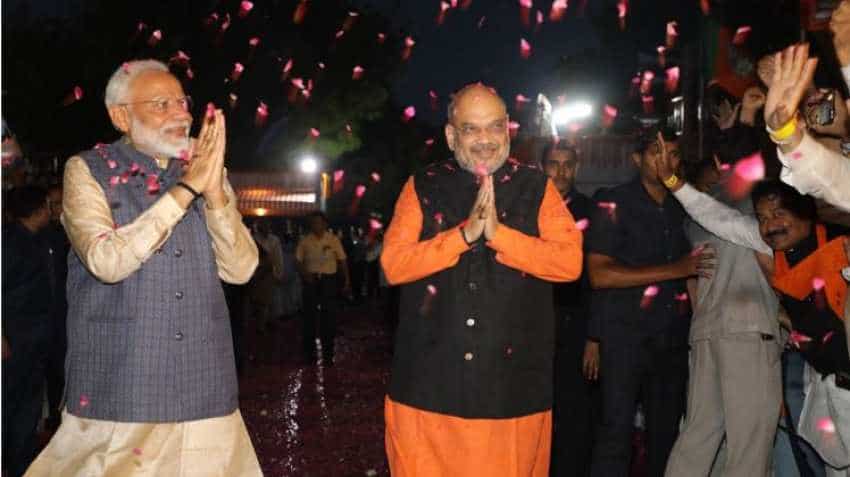 A picture shared by the BJP on Twitter where Narendra Modi and Amit Shah are seen greeting party workers at the party headquarters after the BJP pulled off a stunning and historic victory in the 2019 Lok Sabha battle. Image: BJP

Prime Minister Narendra Modi has won the second term with a huge majority. BJP has won 303 of 543 seats in the Parliament. Along with the alliance partners, NDA is now stronger than past with over 350 Members of Parliament. PM Modi has won the second term on the basis of the works done in his first term. As such, there are huge expectations from his new term. A number of experts from different industry are here their expectations from the new Modi government.

Sudeshna Datta Executive Vice President and Co-Founder Of Absolutdata: In their previous tenure, the NDA government extended great support towards leveraging AI and other such transformative technologies to ensure India’s social and inclusive growth. By spearheading initiatives like Digital India, Skill India, and #AIforAll by NITI Aayog, the government has identified and been actively striving towards developing AI to enable growth and greater inclusion across various integral domains like healthcare, agriculture, education, urban infrastructure, and transportation, to name a few. As the NDA government successfully secures its second consecutive term in the office, the industry welcomes this with great expectations for continued reforms. We expect the government to continue strengthening the initiatives undertaken and boost their development agenda, thereby accelerating the entrepreneurial ecosystem and infrastructure development etc. Furthermore, we expect the government to keep implementing their strategies in harnessing the potential of AI to not only facilitate India’s economic growth and social development but also create employment opportunities for the youth of the country—a key vision of the Modi government.

Gaurav Chopra, Founder & CEO, IndiaLends: Modi government, being re-elected, will bring about stability, which is conducive to business as it will increase foreign fund flow in the country. We are positive that the government will continue its focus and provide support to the start-up and fin-tech ecosystem in the country. Thanks to the overall Digital India program there have been innumerable benefits which have driven the digital economy and led to fin-tech growth. We are hoping more initiatives will be given impetus under the umbrella program of Digital India 2.0. We are also looking forward for a push towards financial inclusion and adoption of technology. On the whole, we are confident that the elected government will undertake bold reforms and demonstrate concrete action to push investments, increase growth and create jobs.

Rudra Chatterjee, President, Indian Chamber of Commerce (ICC): I congratulate the BJP under the leadership of PM Modi for winning a clear mandate for continuation of government. Policies undertaken by the government has delivered fast economic growth, increased foreign investment and significantly eased the process of starting and doing business. In our view, the immediate priority should be given to propelling the Indian economy including enhancing investment expenditure, creation of jobs through the private sector, addressing rural issues, and in keeping fiscal deficit under control. We hope that the government will immediately start in implementing more reforms like increasing liquidity to the financial sector, reducing the GST slabs, undertaking land and labour reforms, continue major infrastructure projects, and encourage more private sector investment in the economy”.

Mandar Agashe, Founder, Sarvatra Technologies: The new government is definitely welcomed by the fintech industry as well as startups due to their ambitious and enterprising vision for a Digital India. We expect the new government to take forward the Digital India vision to the next level in the coming five years. We should aim to record ourselves as at least in the top ten list of digitally advanced nations. We hope to see favourable policies by the government which will help the startups to flourish in our country...Vital steps have to be taken to educate people of all sections and inculcate habits of digitization through attractive incentives, underlining the ease of operability and strengthening the security around these systems. The government has to create a secure, accessible and innovative structure that will allow the Fintechs, Startups and the Digital payments industry to thrive at a booming rate, while also taking measures to nurture innovation to keep up with this rapidly evolving sector.

Mishu Ahluwalia, Founder & CEO, GoHive: The re-elected govt must continue to promote young businesses and should make the policies more startup friendly. It is imperative that both setting up a company and closing a business should be easy. Also, the filings for the first five years should be relaxed.

Garima Kapoor, Economist, Elara Capital: If the first five years of the government were dominated by housing, roads and toilets, the next five would have to be dominated by investment, jobs and nursing of the dislocated financial sector. Among immediate priorities, we expect the Modi led government to take measures to revive consumption, address financial sector dislocation by recapitalizing PSU banks, boost manufacturing sector to ensure job creation and solve the conundrum of skill shortage in the country to ensure employability. On the rural front, NDA is expected to focus on reviving terms of trade in agriculture. We expect the government under Modi to strengthen e-NAM, enhance micro-irrigation facilities, increase credit to agriculture and boost farm prices through effective implementation of schemes such as PM-AASHA.

Gaurav Gupta, Co-founder and COO of Navia Life Care: We expect a strategic plan to promote AI in various sectors, this would need close coordination of different ministries with Information Technology ministry and technology startups. Entrepreneurship has the potential to create millions of jobs in the country, we hope this government will create policies where a conducive environment is created for innovation. Entrepreneurs expect more opportunities for raising high-risk capital, there is a requirement that government PSU’s and its departments be willing to use innovative products. We need policies to be implemented for higher use of technology to make systems efficient and transparent.