HERE IS FULL LIST OF MINISTERS and their PORTFOLIOS: The President of India, as advised by the Prime Minister, has directed the allocation of portfolios among the following members of the Council of Ministers :- 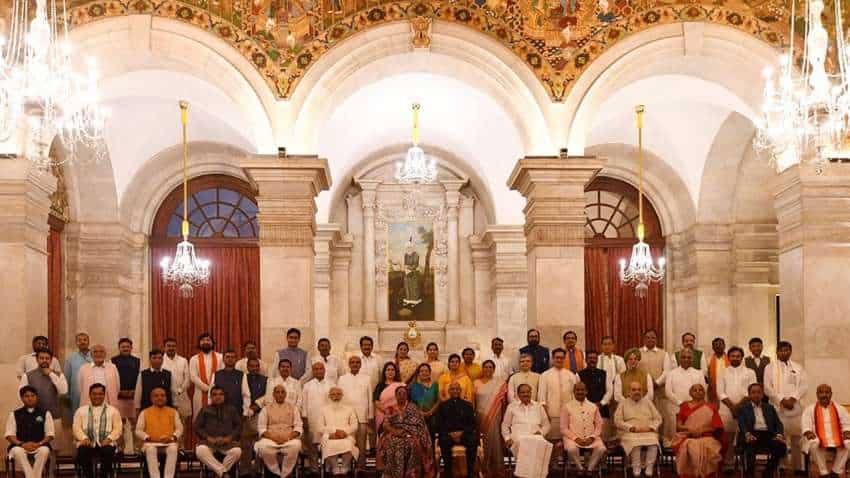 The Prime Minister, Narendra Modi has congratulated all the colleagues who have taken oath today and wished them the very best for their ministerial tenure.

The Prime Minister, Narendra Modi has congratulated all the colleagues who have taken oath today and wished them the very best for their ministerial tenure.

In a tweet, the Prime Minister said, "I congratulate all the colleagues who have taken oath today and wish them the very best for their ministerial tenure. We will continue working to fulfil aspirations of the people and build a strong and prosperous India. #Govt4Growth"

HERE IS FULL LIST OF MINISTERS and their PORTFOLIOS: The President of India, as advised by the Prime Minister, has directed the allocation of portfolios among the following members of the Council of Ministers :-

Minister of Law and Justice

Minister of Power; and

Minister of New and Renewable Energy

Minister of Petroleum and Natural Gas; and

Minister of Housing and Urban Affairs

Minister of Health and Family Welfare; and

Minister of Chemicals and Fertilizers

Minister of Environment, Forest and Climate Change; and

Minister of Labour and Employment

Minister of Tourism; and

Minister of Information and Broadcasting; and

Minister of Youth Affairs and Sports

Apart from 15 Cabinet ministers, 28 Ministers of State, comprising new faces and those elevated, were sworn in a ceremony which was held in the Darbar Hall of the Rashtrapati Bhavan.

After taking into account 12 resignations hours before the expansion has taken the total strength of the Council of Ministers to 78, including the Prime Minister.

This is the first reshuffle in the Council of Ministers by Prime Minister Modi since he assumed charge for a second term in May 2019.

The expansion-cum-reshuffle of the Cabinet is seen by many political observers as an image makeover exercise by Modi as he brought in young faces and gave representation to various social groups and regions in the government. While the average age of the Council of Ministers has come down to 58 years, the new entrants also include many with high educational and professional qualifications.

Scindia and Rane, who switched over from the Congress and the Shiv Sena respectively, bagged Cabinet berths while new entrants of West Bengal were seen as an attempt to bolster the BJP's prospects in the TMC-ruled state that recently saw a high-octane electoral battle.

Lok Sabha MP from Bihar's Hajipur Pashupati Kumar Paras, who is embroiled in a feud with nephew Chirag Paswan over the control of Ram Vilas Paswan-founded Lok Janshakti Party, was also sworn in as a Cabinet minister.

Rane, 69, a Rajya Sabha MP and a former Maharashtra chief minister, was the first to take oath. After
Rane, Sonowal, former Assam chief minister, took oath in English. The 58-year-old leader had earlier served as Union Minister of State (Independent charge) for Skill Development and Entrepreneurship; and Sports and Youth Affairs under Prime Minister Modi

Bhupendra Yadav, who has been serving in the BJP organisation as a general secretary, was also sworn-in as a Cabinet minister.

Among the 28 Ministers of State, seven are from Uttar Pradesh which goes to polls next year with the BJP seeking a second term there.

At least 16 entrants to the Council of Ministers are first time MPs.

Murugan is the only minister who is not an MP and would need to get elected to either Lok Sabha or Rajya Sabha within six months. There is a buzz that he may come in as Rajya Sabha member from Puducherry.

Seven women were among the 43 who took oath, taking the total number of women ministers in the government to 11.

Nisith Pramanik (35), the Lok Sabha MP from West Bengal's Cooch Behar, is the youngest minister to be sworn in, while the oldest member in the council of ministers is 72-year-old Som Parkash.

Social Justice and Empowerment Minister Thaawarchand Gehlot had resigned after he was made Governor of Karnataka on Tuesday.