Modi 2.0 cabinet: Besides 25 Cabinet ministers including Modi, Shah, Rajnath Singh, Nirmala Sitharaman, Nitin Gadkari, Smriti Irani, Piyush Goyal and Jaishankar, nine were sworn in as Minister of State with Independent charge and another 24 as Minister of State. 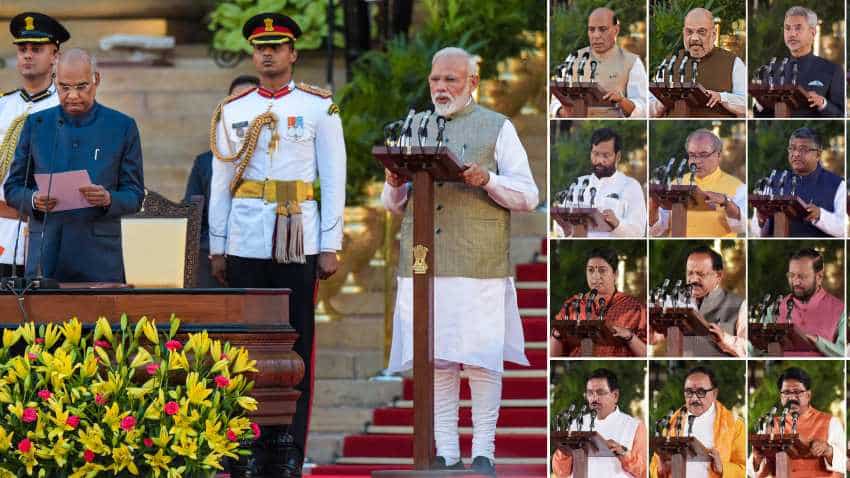 The ceremony also saw many MPs donning their traditional wear for the event with white kurta-pyjama being sported by most of the newly-elected lawmakers. Image source: PTI

Narendra Modi was on Thursday sworn in as the Prime Minister for a second term heading a 58-member ministry with BJP chief Amit Shah making his debut at the Centre and former foreign secretary S Jaishankar emerging as a surprise pick. Veteran party Sushma Swaraj was among the outgoing ministers who found no place. Wearing a beige Nehru jacket, Modi, 68, was administered the oath of office and secrecy by President Ram Nath Kovind at the forecourt of majestic Rashtrapati Bhavan. Besides 25 Cabinet ministers including Modi, Shah, Rajnath Singh, Nirmala Sitharaman, Nitin Gadkari, Smriti Irani, Piyush Goyal and Jaishankar, nine were sworn in as Minister of State with Independent charge and another 24 as Minister of State.

Traditional Indian wear with hues of saffron and use of Hindi language for oath-taking were the overriding themes at the glittering swearing-in ceremony of the new NDA government. Among the ministers who were sworn in, most of them chose to take oath in Hindi while the rest did it in English. In a sartorial sense too, kurta-pyjama was the dominating theme as most of the MPs turned up in kurta-pyjama, colourful waistcoat or their traditional dresses, while a few chose to wear shirts and trousers.

The crowd cheered the most when Modi took his oath in Hindi and someone in the crowd shouted 'Bharat Mata Ki 'Jai' just before he was sworn-in. Dressed in crisp pyjama-kurta and a grey waistcoat, Modi, who arrived at the venue at 7 PM, greeted the people at the event with folded hands and a gentle bow as the crowd cheered him. BJP chief Amit Shah and Smriti Irani, who will make the transition from being Rajya Sabha members to that of Lok Sabha, were also greeted enthusiastically by the crowd when they came to take oath in Hindi.

Smriti Irani is the youngest minister in Modi cabinet

Smriti Irani at 43 years of age has emerged as the youngest in the second Narendra Modi government's council of ministers, who with an average age of 60 years, are a shade younger than their predecessors, who had an average of 62 years. Anurag Singh Thakur, 44, Mansukh Mandaviya and Sanjeev Kumar Balayan at 46 years and Kiren Rijiju at 47 are among the youngest in the group. First time ministers Rameswar Teli and Debasree Chaudhuri are both 48 years old. In the outgoing council of ministers, former minister of state for health, Anupriya Patel, 38, was the youngest. However, she has failed to retain her berth.

BJP ally Lok Janshakti Party leader Ram Vilas Paswan is the oldest at 73 years of age. Close on his heels are Thaawar Chand Gehlot and Santosh Kumar Gangwar at 71 years. The average age of the council of ministers has decreased because many in the previous Modi government, who were over 65 years of age, are no longer part of the new one.

Senior Delhi BJP leader Vijay Goel, 65, Pon Radhakrishnan, 67, who lost the Kanyakumari Lok Sabha seat this time and S S Ahluwalia, 67, who won from Durgapur and a Dalit leader who won from Bijapur in Karnataka Ramesh Chandappa Jigajinagi, 66, have failed to find a place in the council of minister this time. Assam leader Rajen Gohain, 68, Lok Sabha MP from Tikamgarh in Madhya Pradesh, Virendra Kumar, 65, have also been left out.
Rajathan BJP leaders, C R Chaudhary and P P Chaudhary, 71 and 65, respectively, have been both been dropped from the government.

Sushma Swaraj, J P Nadda, Suresh Prabhu, Maneka Gandhi, Rajyavardhan Rathore and Mahesh Sharma are among the notable omissions in the BJP-led NDA's second innings. Despite winning their seats, eight-time MP Maneka Gandhi, six-time MP Radhamohan Singh, Sharma, Jayant Sinha, Anupriya Patel, Jual Oram, Ram Kripal Yadav and Rathore lost their ministerial berths. Another key BJP leader, Nadda, who did not make it to the Cabinet this time was the health minister in the first Modi dispensation. He could be the next Bharatiya Janata Party president as incumbent Amit Shah has joined the government.

The ceremony also witnessed showbiz stars rubbing shoulders with political leaders and corporate honchos like Ratan Tata, Muskesh Ambani and wife Nita Ambani, as they watched President Kovind administer the oath of office to India's 58 new ministers. The crowd had a lot of youth in the audience too and many of them were seen taking selfies with Olympian boxer Mary Kom, MP Tejasvi Surya from Bangalore South constituency and others. South Indian superstar Rajinikanth, Bollywood actress Kangana Ranaut, Karan Johar, Asha Bhosle, Vivek Oberoi and Pallavi Joshi were also among the attendees.

India Inc has welcomed the new term and team of Prime Minister Narendra Modi and hoped that it would be able to give new impetus to the economy, which is facing slowdown in several sectors. BK Goenka, President of Assocham, said India under Prime Minister Modi was slated to undertake the next stage of reforms for becoming a global economic powerhouse.

Said Anil Agarwal, Executive Chairman of Vedanta Resources, "As the Modi government embarks on its second term, I am confident that PM Modi will take series of measures to boost economic growth, make environment more conducive for attracting FDI, including in mining, raise spending on social sector schemes and eliminate poverty."

According to Sanjiv Puri, Chairman and Managing Director of ITC, "His visionary leadership, with a clarion call to address "national ambitions, regional aspirations" will accelerate all round socio-economic development with sectors like agriculture and food processing receiving larger impetus, leading to farmer empowerment and generation of large scale sustainable livelihood."

Earlier at the pre-budget consultations, CII President Vikram Kirloskar had said, "Employment creation needs a strategic boost, including from the lens of revenue generation." In a pre-budget 2019-20 memorandum to the ministry, Ficci has warned of long-term repercussions if the serious concerns on the economy are not addressed urgently.

National Startup Day 2023: Quotes, wishes - All you need to know

2022 was a crucial year for India in combating climate change, reverse nature loss