Karnataka Budget 2021: Reading out Karnataka Budget for 2021-22, CM  BS Yediyurappa announced to establish gaushala in every district of the state to prevent the slaughter of cows and to conserve livestock. 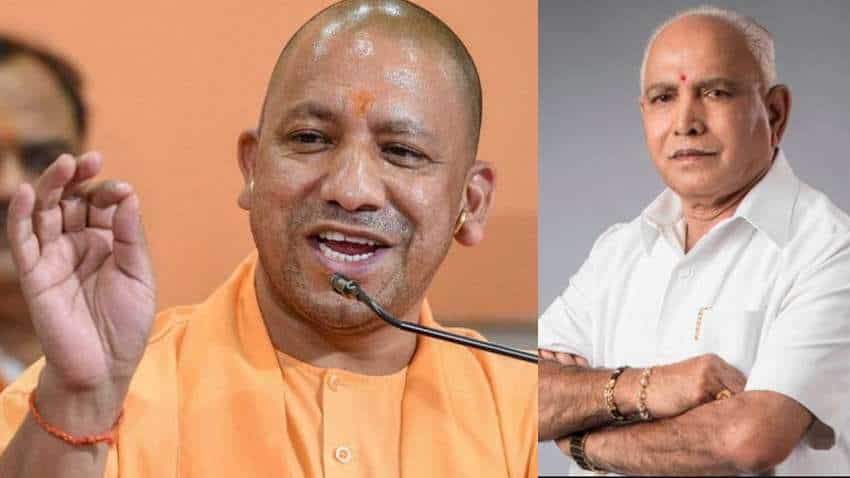 UP CM Yogi Adityanath and Karnataka CM BS Yediyurappa. Pics from PTI and Twitter of BSY.

Karnataka Budget 2021 Highlights: Karnataka CM BS Yediyurappa, who also holds the finance portfolio, has announced that his government will construct Yathri Nivasa in Ayodhya in Uttar Pradesh for devotees from Karnataka visiting the temple town.  Yediyurappa government has allocated Rs 10 crores in 2021-22 Budget; says UP govt will provide 5-acre land.

Moreover, reading out Karnataka Budget for 2021-22, CM  BS Yediyurappa announced to establish gaushala in every district of the state to prevent the slaughter of cows and to conserve livestock.

Karnataka government, in its Budget, says revenue deficit is estimated to be Rs 15,134 crores during Financial Year 2021-22.

"Despite this in the 2021-22 budget, no taxes including Karnataka State Tax on petrol and diesel has been increased and the budget has been formulated in such a way so as not to increase the financial burden on the common man," he added.

Yediyurappa who also holds the Finance Portfolio presented the state budget, his eighth in the legislative assembly Monday.

The Chief Minister said, the Gross State Domestic Product (GSDP) has seen a fall due to lockdown for controlling the COVID-19 pandemic during the year 2020-21, and as per the initial estimation based on fixed prices the GSDP has contracted by 2.6 per cent in comparison with that of 2019-20.

Two cases of Omicron virus detected in Karnataka - What government has said?

KCET results 2021 released by KEA; check how to download, important updates on entering marks and ranks

Karnataka CET 2021 results released, see where and how to check - Find details here