Last quarter of FY17 showcased that indicators of Gross Valua Added (GVA) have defied the impact of demonetisation. This time GST is in picture and analysts and economists feel Q1FY18 economy numbers may not escape its affect. 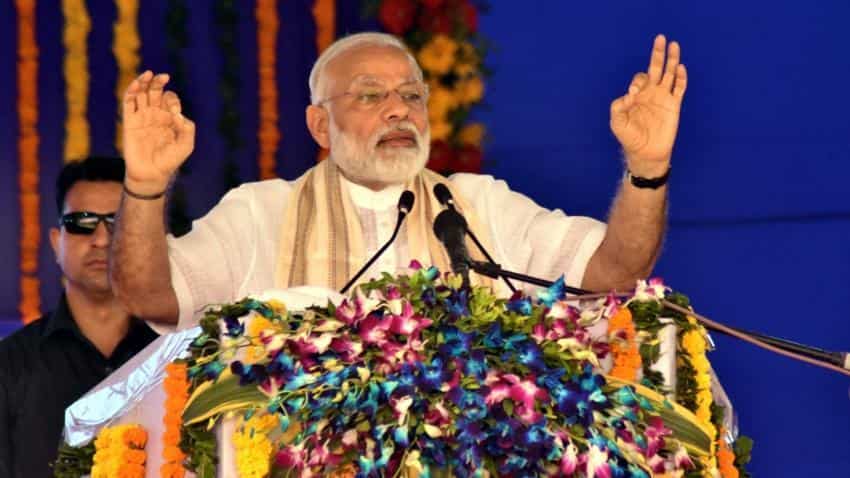 When demonetisation move was announced, analysts and economists predicted that India's Gross Domestic Product (GDP) will be impacted in the coming quarters as consumption demand of various sectors was hampered severely during the period.

However, India's GDP data in last quarter of FY17 defied the impact of demonetisation.

source: tradingeconomics.com
HDFC Bank said, "The sharp slowdown in Q4 should be partly seen in light of a higher deflator impact, which is visible in the difference between growth in nominal and real terms –nominal GVA expanded by 11.3% in Q4, but in real terms the growth fell down to 5.6% in Q4 reflecting a higher GVA deflator (5.7%).”

Similarly, SBI highlighted the performance of sectoral GVA deflator in percentage terms. It stated that the economy was in slowdown mode till first half of FY17 (before demonetisation) and has actually accelerated in the second half. 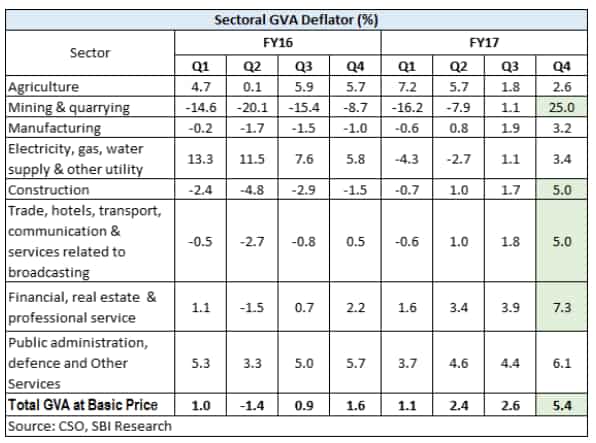 Thus, it was quite evident that demonetisation impact was nowhere to be found in previous quarter.  However, this time the Goods and Services Tax (GST) which got implemented from starting July 2017 has also come into the picture.

Madan Sabnavis and Rucha Ranadive, economists at Care Ratings said, "We expect the GDP growth for the first quarter of ongoing fiscal year i.e. FY18 at 6.5% at constant 2011-12 prices. This growth is contingent on realization of Gross Value Added (GVA) growth at 6.3%."

Teresa John, Research Analysts at Nirmal Bang said, "We expect India’s gross value added or GVA growth to come in at about 6.2% for 1QFY18 while gross domestic product or GDP is likely to register 6.6% growth."

But, John believes serial shocks of demonetisation followed by the implementation of Goods and Services Tax or GST is weighing on the economy.

Even Normura in its report mentioned that the pick-up in growth which was visible in March-end had lost some momentum towards end of June quarter on the backdrop of destocking and uncertainty from GST.

As per the duo at Care Ratings, progress of India's economy in Q1FY18 is partly known in terms of information on aspects of industrial production,
government activity and banking.

While growth in sectors like agriculture, construction, trade, transportation etc. are still unclear and while some of these elements are associated with industry and government expenditure, past trends in linkages are unclear.

John said, "We expect agricultural growth to be robust, but it is likely to be lower than that of the previous quarter, while industry is likely to witness a slowdown reflecting the impact of implementation of GST."

Sectors like manufacturing, trade, hotel and transport and construction will also face impact of GST.

Care said," Production has been affected by substantial destocking activities undertaken by the manufacturers ahead of Goods and Services Tax (GST) implementation."

Meantime, trade, hotel and transport segment of GVA is seen at 7%  with prospective GST impacting services to a limited extent. While construction sector is mulling at 6%  following the push by the government in terms of increased spending on infrastructure.

However, the performance of service sector is seen good in Q1. Nirmal Bang stated lead indicators suggest an uptick in the service sector activity, although the key driver of growth will be government spending.

Bang expects  service sector’s growth (including construction) to rebound to 7.6% YoY from 5.7% in the previous quarter.

Lastly John said, "We expect a strong pick-up in activity in 2HFY18 as the shocks of demonetisation and GST fade away slowly."

Q4FY17 GDP at 6.1% but some sectors defied demonetisation impact
What will India's FY18 GDP growth look like?

What will be India's advanced GDP numbers for FY18?

Demonetisation, GST were not the only reasons for three-year low GDP in Q1FY18