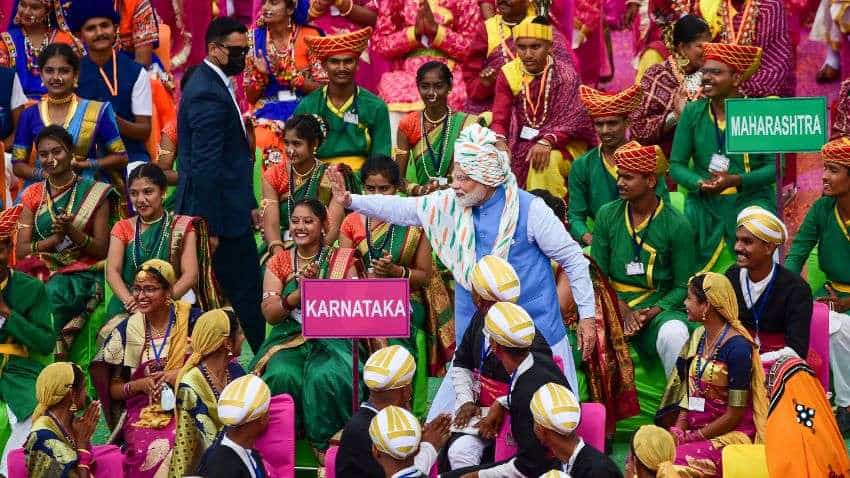 The Prime Minister also stressed on judicious use of water in agriculture. Pic: PTI

Prime Minister Narendra Modi on Monday said natural and chemical-free farming can boost the country's efforts to be more self-reliant in agriculture.

Addressing the nation from the ramparts of the Red Fort on the 76th Independence Day, Modi also stressed on judicious use of water in farm fields.

Stating that Atma Nirbhar Bharat (Self-reliant India) is not the government agenda or programme alone, Modi said it is the people's movement which needs to be strengthened further.

"India is progressing fast. Today natural farming is also the path of self-reliance," he said.

"... Nano fertiliser factories in the country have brought new hopes. But natural farming, chemical-free farming can give strength to self-reliance," he added.

India has become self-reliant in foodgrains, Modi said, and added, "Can we outsource to meet the food security requirement of other countries?"

The Prime Minister also stressed on judicious use of water in agriculture.

"It is the responsibility and efforts of the government to ensure water reaches every farm field. But we need to move ahead saving water by adopting 'per drop more crop'. This should echo from our farm fields," he said.

Further, Modi said millets -- grown by small farmers and in small fields -- are part of India's rich heritage. The country needs to be proud as the world is coming forward to celebrate the International Year of Millets in 2023.

The government is promoting natural farming through schemes like the 'Paramparagat Krishi Vikas Scheme'. About 30,000 clusters have been created across the country under the scheme for the benefit of lakhs of farmers.

Meanwhile, natural farming has also been linked with the Namami Gange project, and a separate campaign has been undertaken to create a natural farming corridor along the Ganga river.