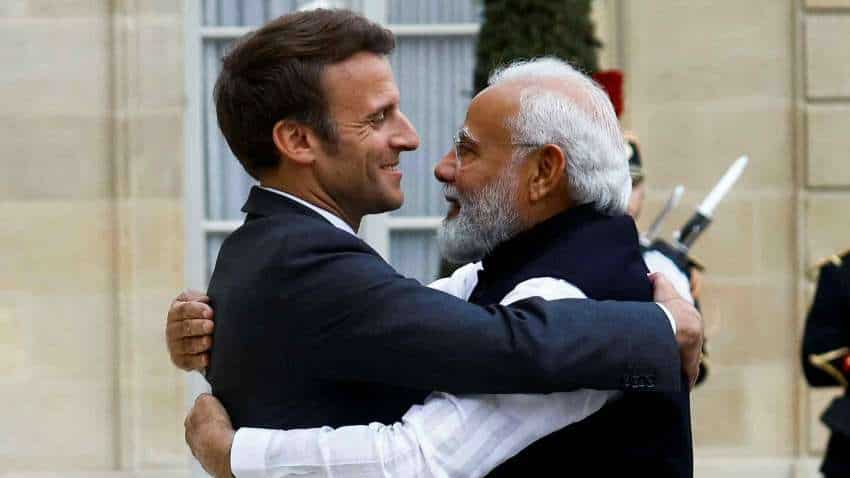 Earlier, PM Modi hoisted the national flag at the ramparts of the Red Fort on the 76th Independence Day and addressed the nation for the ninth consecutive time. Source: Reuters

"Dear friend Narendra Modi, dear Indian people, many congratulations on Independence Day. As India proudly celebrates achievements of the past 75 years of Independence, rest assure that France will be always by India's side," tweeted Emmanuel Macron in Hindi.

Earlier, PM Modi hoisted the national flag at the ramparts of the Red Fort on the 76th Independence Day and addressed the nation for the ninth consecutive time. On the 75th anniversary of the country's Independence, the government has launched a host of events to add to the verve of the celebrations.

In line with the "Azadi ka Amrit Mahotsav" celebrations, Prime Minister Narendra Modi chose a white safa with tricolour stripes and a long trail as his headgear for the Independence Day address.

While addressing the nation for the ninth time from the historic ramparts of Red Fort, Prime Minister Modi hit out at the `parivaarwad` and `bhai-batijawad` in his speech and asked the people to help eradicate this.

Modi said that the talent will be the basis for the progress of new India. "To cleanse every institute of India, let`s shift our mentality from `bhai-bhatijawad` and `Parivaarwad` and give an opportunity to the citizens who deserve it," he said.

"Corruption and dynasty politics are two of the biggest challenges before India. We need to fight against corruption with full might", said PM Modi in his speech.

He also urged the people to pledge not to do anything that lowers the dignity of women, saying a mentality to insult them in speeches and behaviour has crept in.

"A distortion has crept in our conduct and we at times insult women," he said, and asked, "Can we take a pledge to get rid of this from our behaviour and values?"
It is important that in speech and conduct "we do nothing that lowers the dignity of women", he said.