Union Finance Minister Nirmala Sitharaman underlined the need to rescue countries facing debt stress due to the uncertainty caused by the pandemic and the recent geopolitical developments. 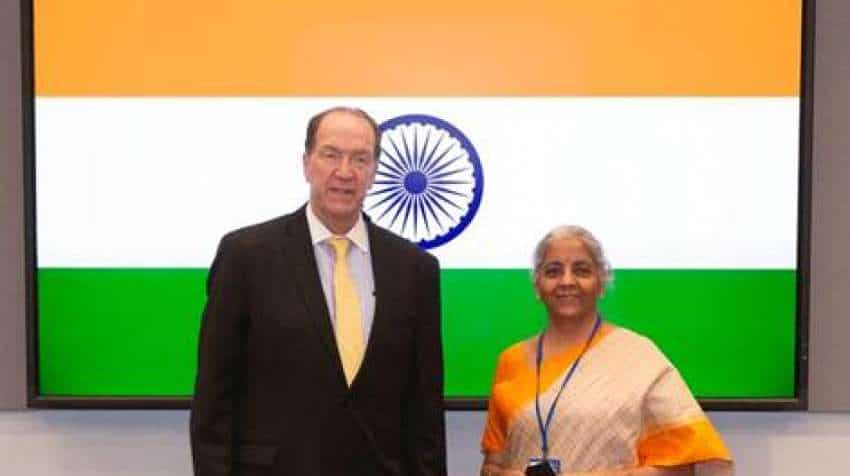 Union Finance Minister Nirmala Sitharaman underlined the need to rescue countries facing debt stress due to the uncertainty caused by the pandemic and the recent geopolitical developments.

"On account of the pandemic and the recent geo-political developments, there is a need for the World Bank to come to the rescue of countries facing debt stress. In particular, the World Bank needs to pay special attention to Sri Lanka, which is facing an unprecedented economic situation," Sitharaman said during a meeting with World Bank Group President David Malpass on Friday.

The finance minister also said that India remains concerned about the risks to global recovery due to rising uncertainty amidst enhanced geopolitical tensions.

The finance minister, who is visiting the US to attend IMF-WB (International Monetary Funds and World Bank) Spring Meetings 2022, suggested that multilateralism has become more critical as the world is undergoing a phase of exceptional uncertainty, an official finance ministry statement said.

During the meeting, the finance minister stated that India's pandemic response has focused on the twin goals of saving lives and livelihoods. India has been successfully running the world's second-largest vaccination programme, administering more than 1.85 billion doses of vaccine, she said.

She also discussed the impact of the Russia-Ukraine conflict on the world economy and India in particular; the economy and role of the World Bank Group; the Single Borrower Limit and exploring the possibility of Guarantees from other nations and India's G20 Presidency.

In her intervention at this session, the finance minister underlined that India voluntarily offered COVID Vaccine Intelligence Network (CoWIN) platform to all countries and stands willing to provide assistance for other public-goods platforms recognising the importance of replication of proven and scalable digital platforms.

She also drew the attention of the distinguished gathering in the meeting to the unprecedented situation in Sri Lanka and hoped for decisive relief to the island nation.

Nirmala Sitharaman on inflation: Government making efforts to keep it under 4%