-An innovation ecosystem for Defence, namely “Innovations for Defence Excellence (iDEX)” was launched in April, 2018. 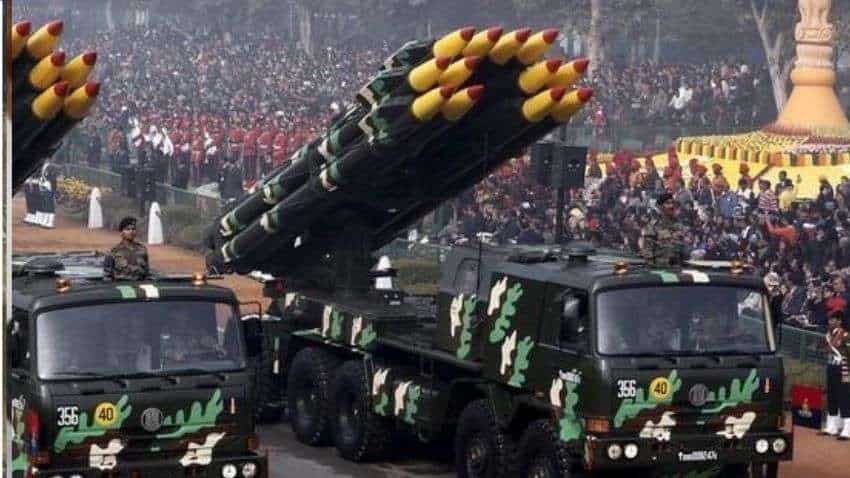 The Government has taken steps to promote ‘Atmanirbhar Bharat’ in the defence sector. Reuters Photo

The Central Government has enhanced FDI limit in Defence Sector up to 74% through the Automatic Route for companies seeking new defence industrial license and up to 100% by government Route wherever it is likely to result in access to modern technology.

In the General Budget 2018-19, Central Government announced setting up of 2 Defence Industrial Corridors (DICs) in the country. In pursuance of the said announcement, it was further decided to set up one of these Corridors in Uttar Pradesh (UP) and another in TamilNadu (TN).

Defence Industrial Corridors are aimed at providing fillip to the defence manufacturing ecosystem in both States and attract investment worth Rs. 10,000 Crore in each of the DICs by the year 2024-25. The respective State Governments provide necessary lands, connectivity and basic infrastructure for the DIC.

Subsequently, the central government has received proposals from 08 State Governments, including Telangana for setting up of Defence Industrial Corridors in their States.  No proposal has been received from the State of Andhra Pradesh. The two defence corridors are intended to provide a fillip to strengthening the defence manufacturing ecosystem in India including all States.

The Government has taken steps to promote ‘Atmanirbhar Bharat’ in the defence sector:

Defence Procurement Procedure (DPP)-2016 was revised as Defence Acquisition Procedure (DAP) - 2020, which is driven by the tenets of Defence Reforms announced as part of ‘Aatmanirbhar Bharat Abhiyan’.

In order to promote indigenous design and development of defence equipment ‘Buy {Indian-IDDM (Indigenously Designed, Developed and Manufactured)}’ category has been accorded top most priority for procurement of capital equipment. The ‘Make’ Procedure of capital procurement has been simplified.

There is a provision for funding up to 70% of development cost by the Government to Indian industry under Make-I category, whereas Make-II procedure provides assurance to the industry for procurement. In addition, there are specific preferences for MSMEs under the ‘Make’ procedure.

-  Ministry of Defence has notified two ‘Positive Indigenisation Lists (PILs)’ with total 209 items for which there would be an embargo on the import beyond the timeline indicated against each of them, offering a great opportunity to the Indian defence industry to manufacture these items using their own design and development capabilities to meet the requirements of the Armed Forces in the coming years.

- Ministry of Defence has earmarked about 64 per cent of its modernisation funds amounting to almost Rs 71,000 crore under the capital acquisition budget for 2021-22 for procurement from the domestic industries.

- The Government of India has enhanced FDI limit in Defence Sector up to 74% through the Automatic Route for companies seeking new defence industrial license and up to 100% by Government Route wherever it is likely to result in access to modern technology.

-  An innovation ecosystem for Defence, namely “Innovations for Defence Excellence (iDEX)” was launched in April, 2018.

-  An indigenization portal, namely SRIJAN, has been launched in August 2020 for DPSUs/Services with an industry interface to provide development support to MSMEs/Start-ups/Industry for import substitution. As of today, 16583 items have been uploaded for indigenisation. Out of them, 2709 items have been indigenised.

- Defence products list requiring Industrial Licences has been rationalised and manufacture of several parts or components are delicensed.

-  “Offset portal” has been launched in May, 2019 to ensure greater transparency, efficiency and accountability in the process. Reforms in Offset policy have been included in DAP -2020, with thrust on attracting investment and Transfer of Technology for Defence manufacturing, by assigning higher multipliers to them.

- Defence Investor Cell (DIC) has been created in February, 2018 in Ministry of Defence to provide all necessary information including addressing queries related to investment opportunities, procedures and regulatory requirements for investment in the sector.

- Inter-Governmental Agreement (IGA) on “Mutual Cooperation in Joint Manufacturing of Spares, Components, Aggregates and other material related to Russian/Soviet Origin Arms and Defence Equipment” was signed in September, 2019.

New rules for consumer commissions: Government issues notification - All you need to know