Bihar Cabinet Expansion 2021 List News: The much-awaited expansion of the Nitish Kumar cabinet in Bihar took place on Tuesday with the induction of 17 members, including Syed Shahnawaz Hussain. 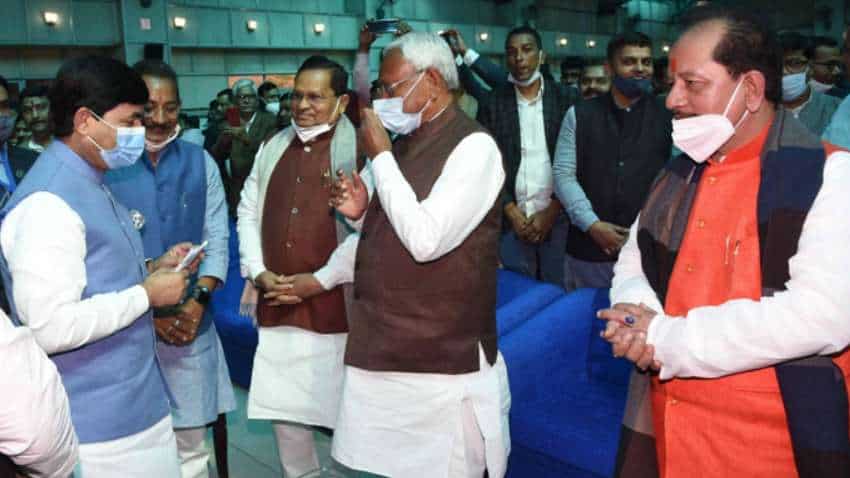 Bihar Cabinet Expansion 2021 List News: The much-awaited expansion of the Nitish Kumar cabinet in Bihar took place on Tuesday with the induction of 17 members, including Syed Shahnawaz Hussain. The former union minister and party national spokesman, who got elected to the legislative council last month, was the first to be administered oath of office by Governor Phagu Chauhan. He was among nine inductees from the quota of the BJP which now has 20 members in the state cabinet.

As per norms, the state cabinet can have up to 36 members including the chief minister.

With the expansion cabinet strength has risen to 34.

One member each was inducted from the quotas of smaller allies Hindustani Awam Morcha (HAM) and Vikassheel Insaan Party (VIP) when the cabinet was formed in November last.

"Decision about the allocation of portfolios has been taken. You all will get to know about the same once the notification is issued", the chief minister told reporters, smilingly, after the ceremony.
With the exception of Pramod Kumar who held key portfolios in the previous government, the BJP placed its trust in "fresh faces".

9 - Zama Khan, got elected on a BSP ticket but joined JDU recently

10-Sumit Singh, Independent MLA who has pledged full support to the chief minister.

16- Jayant Raj, a 35-year-old who is among the youngest party MLAs

17- Sunil Kumar is an alumnus of St Stephen's College, Delhi

Lesi Singh's induction has raised the number of women in the cabinet to three. Earlier, BJPs Renu Devi and JD(U)s Sheela Mandal had been sworn in and the former was elevated as a Deputy CM.

Shahnawaz Hussain took oath in urdu, Sanjay Jha did so in maithili language while others chose hindi at the swearing-in.

This BJP MP says 'no mehngai' India, then corners opposition on ‘revadi’ culture

Independence Day Special: How investment habits, preferences of people have changed over the past 75 years