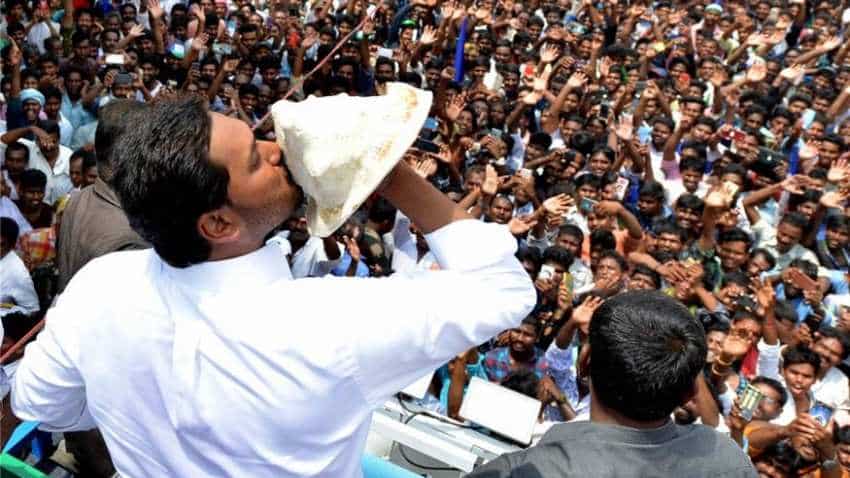 Amaravati: YSR Congress Party (YSRCP) chief Jagan Mohan Reddy blows a conch as he celebrates with party workers after the YSRCP emerged victorious in the Andhra Pradesh Assembly elections in Amaravati, on May 23, 2019. IANS

Andhra Pradesh election results 2019: YSR Congress Party (YSRCP), which swept to power in Andhra Pradesh with a landslide victory, has bagged 151 seats in 175-member Assembly. It also won 22 out of 25 Lok Sabha seats. As counting in couple of constituencies continued past midnight with keen tussle between the YSRCP and the Telugu Desam Party (TDP), the final tally became clear early Friday. The TDP finished a distant second with 23 Assembly and three Lok Sabha seats. Actor Pawan Kalyan`s Jana Sena Party (JSP), which made the electoral debut, bagged one Assembly seat. Both the Congress and the Bharatiya Janata Party (BJP) drew blank. In 2014, the TDP had bagged 102 seats while its then ally BJP had won four seats. The YSRCP had won 67 seats while two independents were also elected. In the simultaneous Lok Sabha polls, TDP had won 15 seats, YSRCP eight and BJP two seats.

When he was first elected to the state Assembly in 2014, Jagan won the Pulivendula seat -- his home turf in Kadapa district -- by a record margin then of 74,256 votes.
On both the occasions, it was the highest victory margin secured by any candidate in state elections in Andhra Pradesh.

Jagan's YSRC has won 120 Assembly seats out of the total 175 and is heading towards victory in 30 more seats.

Jagan, son of late Chief Minister Y S Rajasekhara Reddy, will be formally elected as leader of YSRC Legislature Party on May 25. He will be sworn-in as the bifurcated state's second Chief Minister at a public function in Vijayawada on May 30.

Kept your Money idle due to elections? Deploy it systematically now in this combo; expert Vidya Bala offers funds insight

Liquor sales to be limited, then banned in Andhra? See what CM designate YS Jagan Mohan Reddy has promised to do