IMF's 7.4% growth forecast for India in FY19 a boost to Modi govt 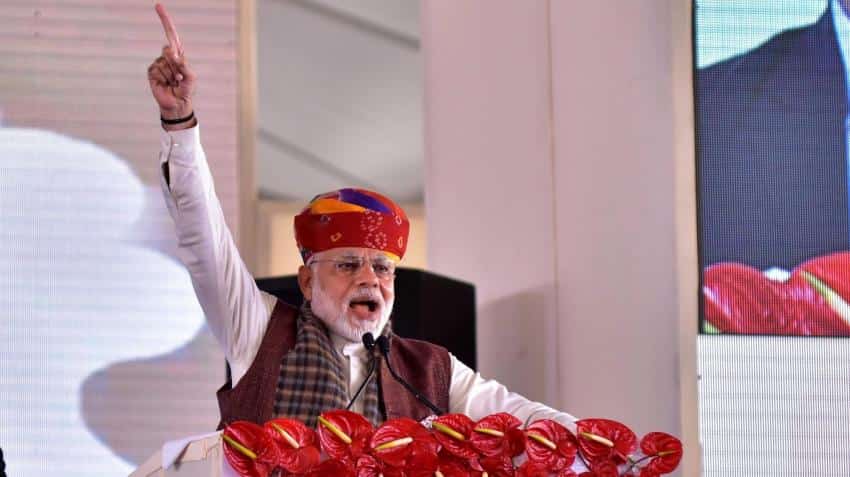 With just a few days ahead of the presentation of Union Budget 2018, the statement by International Monetary Fund (IMF) that India’s economy will grow by 7.4% in the next fiscal year is a big boost for the Narendra Modi government, as it has long been claiming that the economy is on the right track.

This would mean that India will regain its position as  the fastest-growing large economy as China slows down.

This would also be a booster for the NDA government which will be presenting its last full Budget, ahead of the next year’s general elections.

For India, data and forecast are presented on a fiscal year basis and GDP from 2011 onward is based on market prices with FY2011/12 as a base year.

IMF said that emerging and developing Asia will grow at around 6.5% over 2018–19, broadly the same pace as in 2017. The region continues to account for over half of world growth.

It added, “Growth is expected to moderate gradually in China (though with a slight upward revision to the forecast for 2018 and 2019 relative to the fall forecast, reflecting stronger external demand), pick up in India, and remain broadly stable in the ASEAN-5 region.”

Firstly, the need to raise potential output growth — through structural reforms to lift productivity and, especially in advanced economies with aging populations, enhance labour force participation rates — while making sure that the gains from growth are shared widely.

Secondly, the imperative to increase resilience, including through proactive financial regulation and, where needed, balance-sheet repair and strengthening fiscal buffers.

When India’s GDP reached to three-year low in June quarter of FY18, the IMF slashed the country’s growth project by 0.5% to 6.7% for the fiscal.

On January 5, 2018, the Central Statistics Offices (CSO) released  its first advance estimates of GDP growth for current financial year, stating that Indian economy will expand by 6.5% in 2017-18.

Last month, IMF spokesman Gerry Rice told reporters at a news conference said, “We will be updating the forecast for India, including the growth rate, and that will be coming January with the update of our World Economic Outlook.”

This was against the backdrop of when US-based Moody's upgraded India's sovereign rating after a gap of 13 years to Baa2, with 'stable' outlook, from Baa3 earlier, citing improved growth prospects driven by economic and institutional reforms.

The IMF head Christine Lagarde in October 2017 said, "Turning to India...we have slightly downgraded India; but we believe that India is for the medium and long-term on a growth track that is much more solid as a result of the structural reforms that have been conducted in India in the last couple of years."

Indian economy has shaken off the effects of demonetisation and GST rollout as the GDP growth surged by 6.3% in the September quarter compared to 7.5% in the corresponding period of the previous year. India’s economic growth had decelerated to three-year low of 5.7% in the June quarter.

In its latest World Economic Outlook (WEO) update released in Davos, Switzerland on the sidelines of the World Economic Forum, the IMF head stated that in the world economy, all signs point to a further strengthening both this year and next.

Lagarde  said in an IANS report, "We should certainly appreciate this season of broad-based growth momentum."

However, she also warned saying,  "But we should also use this time to find lasting solutions to the challenges facing the global economy in 2018."

Recession will hit a third of the world this year, warns IMF chief Kristalina Georgieva