47th GST Council Meeting Outcome: About a dozen states cutting across party lines on Wednesday pitched for extending the mechanism to compensate states for revenue lost from the implementation of GST beyond June 30, but no decision was taken. 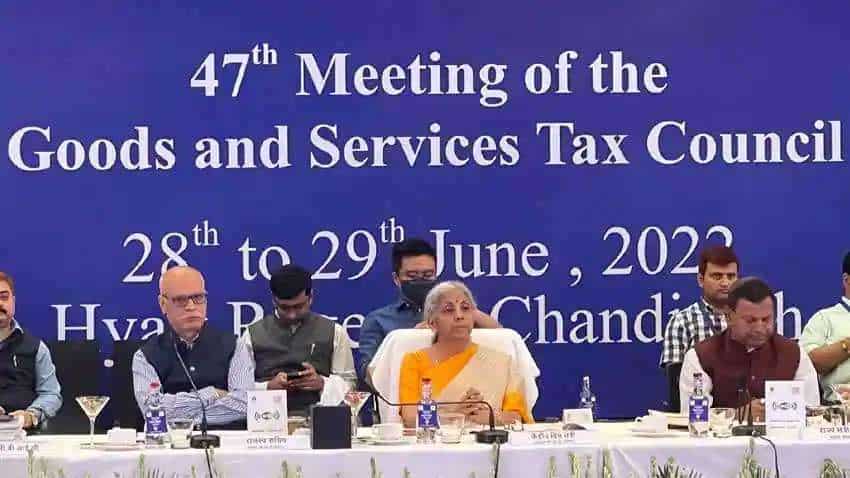 A group of ministers headed by Meghalaya Chief Minister Conrad Sangma has been asked to consider submissions of stakeholders again on the valuation mechanism and submit its report by July 15, she told reporters, as per a PTI report.

The council will meet again in the first week of August to decide on the issue, she said.

A two-day meeting of the panel considered a report of the GoM but deferred a decision as Goa and some others wanted to make more submissions.

The GoM had recommended that online gaming should be taxed at the full value of the consideration, including the contest entry fee paid by the player on participating in the game.

In cases of race courses, it had suggested that GST be levied on the full value of bets pooled in the totalisators and placed with the bookmakers.

It also recommended that no distinction should be made on grounds of game of skill or game of chance for the purpose of the levy of GST and should be taxed at the highest rate of 28 per cent.

About a dozen states cutting across party lines on Wednesday pitched for extending the mechanism to compensate states for revenue lost from the implementation of GST beyond June 30, but no decision was taken.

Briefing reporters about deliberations at the two-day meeting of the GST Council here, Union Finance Minister Nirmala Sitharaman said finance and other ministers of 16 states spoke on the compensation issue.

Of the 16 states, 3-4 spoke of evolving their own revenue stream to break from the compensation mechanism, she said.

When a nationwide Goods and Services Tax (GST) subsumed 17 central and state levies from July 1, 2017, it was decided that states will be compensated for any loss of revenue from the new tax for five years. That five-year term is ending on June 30.

With two years being lost in the pandemic, states have sought an extension of this compensation mechanism.

There is no opposition (on the change in GST rates), not even one...The Fitment Committee's suggestions before the GST Council were considered in full, and more or less, all of them have been accepted.

- Smt @nsitharaman on outcomes of 47th #GSTcouncilmeeting in Chandigarh. pic.twitter.com/f7YWW1kvIO

The Council - the highest decision-making body of the indirect tax regime, which is headed by the Union Finance Minister and comprises representatives of all states and UTs - discussed the issue at a meeting here but did not take a decision.

India is facing no risk of recession: Nirmala Sitharaman in Lok Sabha during price rise debate

Independence Day 2022: What PM Modi said on launch of 5G mobile services in his I-Day speech

Do you know which is India's most trusted institution? Find here