3 nations, 4 days, 33 hours of flying: What PM Narendra Modi did on his tour 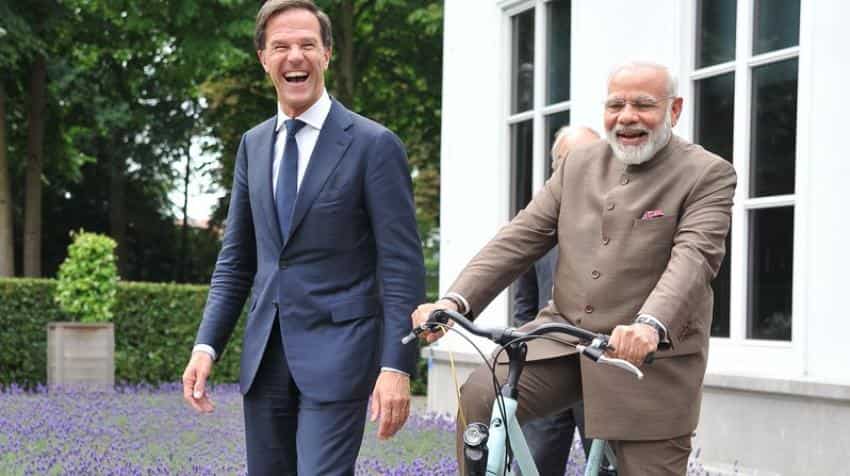 When Prime Minister, Narendra Modi arrived in the nation’s capital on Wednesday morning he had completed four full days and 33 hours of flying as a part of his three-nation tour.

He was received by Minister of External Affairs, Sushma Swaraj on his arrival in New Delhi after his trip to Portugal, America and the Netherlands, where he met with world leaders.

PM @narendramodi being received by External Affairs Minister @SushmaSwaraj on his arrival to Delhi after successful 3-Nation tour pic.twitter.com/9NYcubhLrr

PM Modi left for the first-leg of his three-nation tour on June 24 where he met with Prime Minister Antonio Costa.

In his talks with PM Costa, Modi said he would focus on building joint initiatives and enhance bilateral engagement. He also spoke to the Indian community overseas and presented the Overseas Citizen of India card to PM Costa.

His trip to Portugal the India-Portugal International Startup Hub. The platform has been launched to strengthen and foster the connection between the startup ecosystem of the two countries. It will also help enablers connect with the Indian and Portuguese origin in networking and funding of their own startups

Earlier in Portugal, PM @narendramodi met people from 5 Gujarati families who prepared the lunch that was hosted by Mr. @antoniocostapm. pic.twitter.com/JUAkLUgx5C

In his visit to Washington DC, PM Modi was given a warm welcome by the Indians living abroad. He arrived in America on June 25 and went on to meet CEOs of global technology corporations like Microsoft, Apple Inc and Google.

Apple Inc CEO, Tim Cook had told PM Modi that his company was positive on the production of the iPhone SE back home in India. Cook was among 21 US Corporate leaders who met Modi in Washington.

Overwhelmed by the warmth of the Indian diaspora at the community programme in Washington DC. Sharing my speech. https://t.co/gJ5D93ZmHy pic.twitter.com/ctG5BIlUsR

PM Modi was also the first world leader to have met with American President Donald Trump after he took office in January this year. President Trump proceeded to call PM Modi a ‘true friend’ and the two shared a joint statement and a dinner at the White House.

PM @narendramodi with US President @realDonaldTrump and the first lady of USA @FLOTUS during his #USvisit pic.twitter.com/pxCoiuImHa

From talks about securing the nation’s borders against terrorism to strengthening Indo-US ties the two world leaders spoke about many issues.

On the final-leg of his three-nation tour, PM Modi visited Netherlands and addressed the Indian community there as well.

PM @narendramodi being welcomed by the Indian community at the Community Reception in Netherlands pic.twitter.com/DUraNplVgg

The Prime Minister also spoke about women empowerment and touched upon the decision of granting a five-year business and tourist visa to Dutch passport holders.

(With inputs from PTI and IANS)